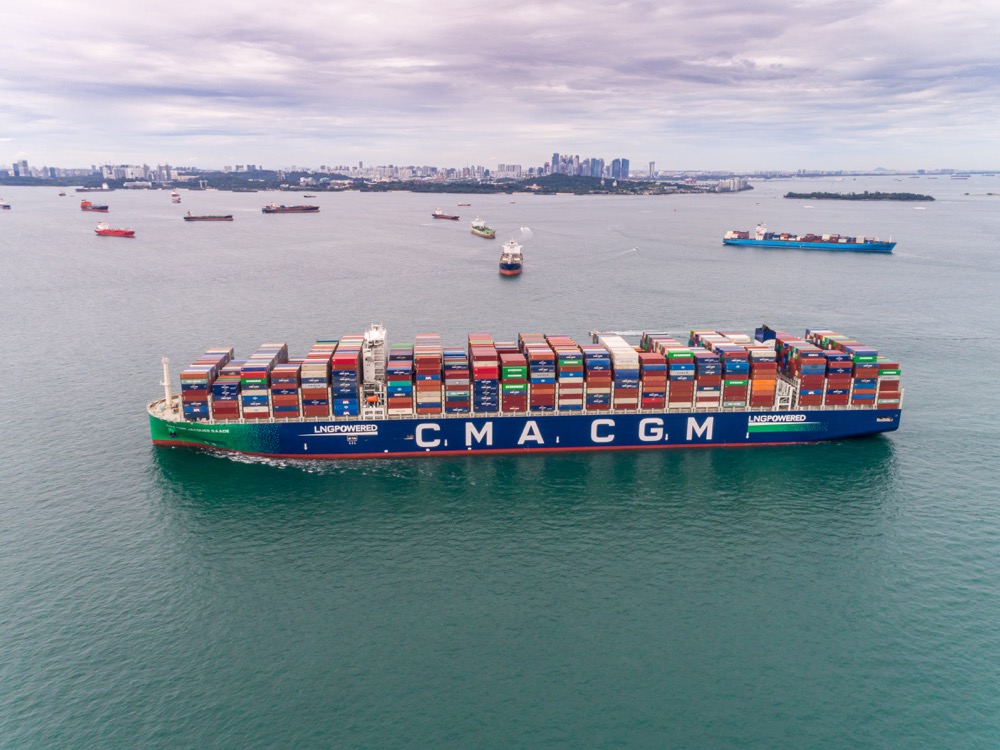 The CMA CGM Jacques Saade, the first container ship of this size powered by Liquefied Natural Gas (LNG), set a world record on October 12 by loading 20,723 full containers in Singapore.

Finding a new way forward for global seaborne trade was the focus of discussions during the Global Maritime Forum’s week-long Virtual-High Level Meeting on October 7-14. The meeting gathered around 240 global leaders from across the entire maritime spectrum to learn from the realities exposed by the COVID-19 pandemic, and to identify the windows of opportunity to build back better. Pooling demand for green fuels and the need for a universal crew change standard were also among the topics raised.

“To a greater extent than perhaps ever before, the maritime industry will require productive collaboration between the public and private sectors and across traditionally competitive barriers if it is to contribute fully to reinforcing the resilience of the international supply chain and the preservation of the environment. In doing so, it will be responding to the demands of society at large and demonstrating its sense of global responsibility,” said Peter Stokes, Chairman, Global Maritime Forum.

Senior maritime stakeholders discussed shipping’s decarbonization with a shared sense of urgency and willingness to collaborate across the value chain. They were encouraged to heighten their ambitions in the fight against the climate crisis by the UN Deputy Secretary-General, Amina Mohammed, who stressed the importance of their voice in urging governments for accelerated climate action.

A carbon levy was widely discussed as a way of enabling shipping’s green transition. Shipping executives would prefer a carbon levy to apply globally, but also see opportunities to help design national and regional schemes in a way that encourages a global approach and raises funds to be used in accelerating shipping’s decarbonization.

“As a parallel to pushing for a global levy through the IMO, we should lean in by showing active support and push for national and regional regulations,” said Chistian Ingerslev, Chief Executive Officer, Maersk Tankers.

“It’s not a question of whether the EU is making the ETS for shipping, it’s a question of how. We need to embrace that, engage in it, and maybe we could structure that mechanism so that it becomes a global one,” added Lasse Kristoffersen, President and CEO, Torvald Klaveness.

If the industry were to aggregate demand for zero emission fuels, this could encourage energy companies to invest in new fuel production facilities, and governments to support the development of the first large scale project.

“We should build a coalition of shipowners willing to sign a binding letter of intent conditional only to the price of green fuels to be the same as fossil fuels. That will show a substantial aggregated demand for green fuel infrastructure projects to be started as soon as possible as they will guarantee offtake when the projects are ready,” said Hugo de Stoop, Chief Executive Officer, Euronav.

The humanitarian crisis which occurred when thousands of seafarers were stranded on board vessels, risks leaving long-term consequences for seafarer wellbeing. High-level maritime leaders will establish a task force to address the crew change crisis and work together with governments and other key stakeholders to agree on ways to resolve the untenable situation.

“We need a common set of universal crew change standards which we can all put our name to as being best practice, and develop into a charter that we can all sign off to and hold up as the gold standard in the way to handle crew changes going forward,” said Jeremy Nixon, Chief Executive Of ficer, Ocean Network Express.

The meeting also saw the launch of the Sea Cargo Charter, a new framework for aligning chartering activities with responsible environmental behavior. The Sea Cargo Charter, which establishes standards for assessing and disclosing the climate alignment of chartering activities around the globe, was developed by leading bulk charterers with the support of the Global Maritime Forum.

The Global Maritime Forum will collect the ideas for action that emerged from the discussions during the Virtual High-Level Meeting and develop them further to support a cleaner, safer and more resilient maritime industry. A report summarizing the discussions will be published later this year.

The Global Maritime Forum’s next Annual Summit will take place in London on 27 and 28 October 2021.