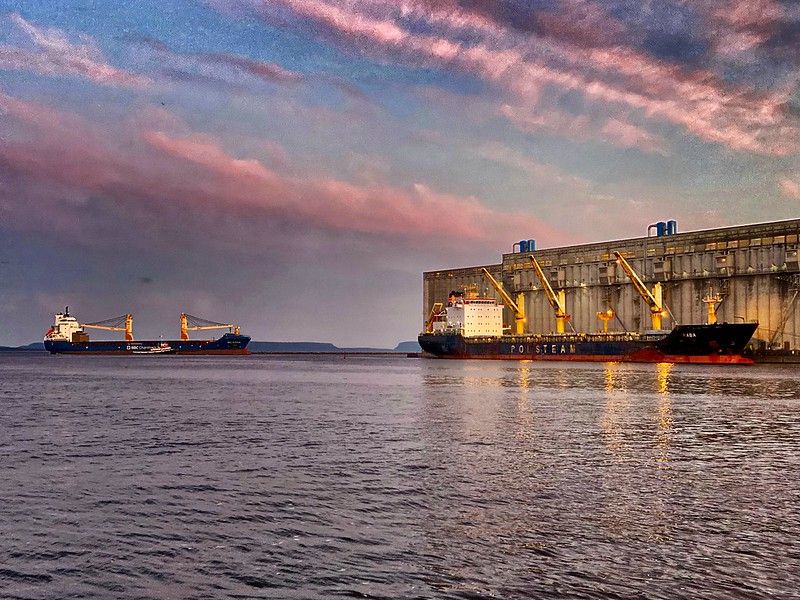 The global pandemic continued to impact cargo volume in certain commodities on the St. Lawrence Seaway, but Canadian grain shipments continued to show impressive gains, topping 6.2 million tonnes in the April 1 to end September commercial navigation period. This represented a 20% increase from a year earlier. Overall shipments through the North American waterway totaled 23.2 million tonnes – a decline of 8%.

While the grain rush has helped lift cargo totals, Great Lakes-Seaway shipping also reported decreases in commodities related to steel production, and the energy and construction sectors. Iron ore was down 20.6% at 4.2 million tonnes, dry bulk down 12.6% at 6.5 million tonnes, and liquid bulk down by 27.4%. General cargo, which includes project cargo, held pretty steady with a moderate drop of 2.8%.

“In a year of many ups and downs, we’re pleased to see grain exports perform remarkably well,” said Terence Bowles President and CEO of The St. Lawrence Seaway Management Corporation. “The new Prairie wheat and canola crops have been arriving by rail over the past few weeks at the Port of Thunder Bay and the Ontario soybean harvest is now underway. We anticipate strong grain shipments will continue for the remainder of the year.”

The Port of Thunder Bay reported that grain shipments up to the end of September totaled 5.97 million metric tons, an increase of 23 per cent over the same period in 2019.

“Grain shipments at the port have been up every month this season to meet world demand for bread and pasta. All of that grain was from last year’s Prairie crops,” said Tim Heney, President and CEO of Thunder Bay Port Authority. “We now have more than 500,000 metric tons from the new harvest in storage waiting to get shipped out on vessels. Rail car unloads at the port over the last weeks continue to be significantly up compared to 2019. We have a busy fall ahead of us.”

Among other Canadian ports, the Port of Johnstown marine revenue numbers are up over 30 per cent at of the end of the third quarter, attributed to project cargo being stored at the Port’s newly developed facilities. Marine cargo movement is approximately 50,000 tonnes below September 2019 figures due to the delay of two salt vessels until October.

“The Port of Johnstown is positioned to have a record year; however, a lot will depend on the 2020 harvest and the ability to flow grain through the system. This will largely depend on the timing and availability of both Salties and Lakers to pull the grain from the port’s stores. Lower soybean market value has also contributed to the delay in sales from the farmers to the brokers, however, a recent increase in soybean prices has resulted in more sales for October and we should see more movement of soybeans,” said Port General Manager Robert Dalley.

September has given the Hamilton-Oshawa Port Authority plenty of reasons to smile. As of Sept. 30th, the Port of Hamilton’s total cargo was up 15 per cent over the same month in 2019. Its year-to-date totals for grain, fertilizer, salt, coke, and gypsum have also increased significantly from the prior year. Though the year-to-date overall cargo total for the Port of Hamilton is still 13 per cent less than 2019’s total, the gap is shrinking. (Back in August, it was down 18 per cent.)

Across Lake Ontario, the Port of Oshawa has defied the odds – as its year-to-date tonnage total is up 15 per cent, led by steel and cement cargo, despite COVID-19.

“This summer we were bracing ourselves for a significant drop in results, as all types of cargo were being affected,” said Ian Hamilton, President & CEO of HOPA Ports. “Though it’s still early, we’re quite pleased to see the trend reversing. This pandemic may have changed how we work, but we’ve never stopped – the integrity of our supply chains has been maintained and at this moment, there’s more than $21 million worth of construction projects on the go at the Port of Hamilton. That’s the most we’ve ever had going on at one time.” (Photo Port of Thunder Bay)