A Captain caught after a slaughter at sea (Forum) 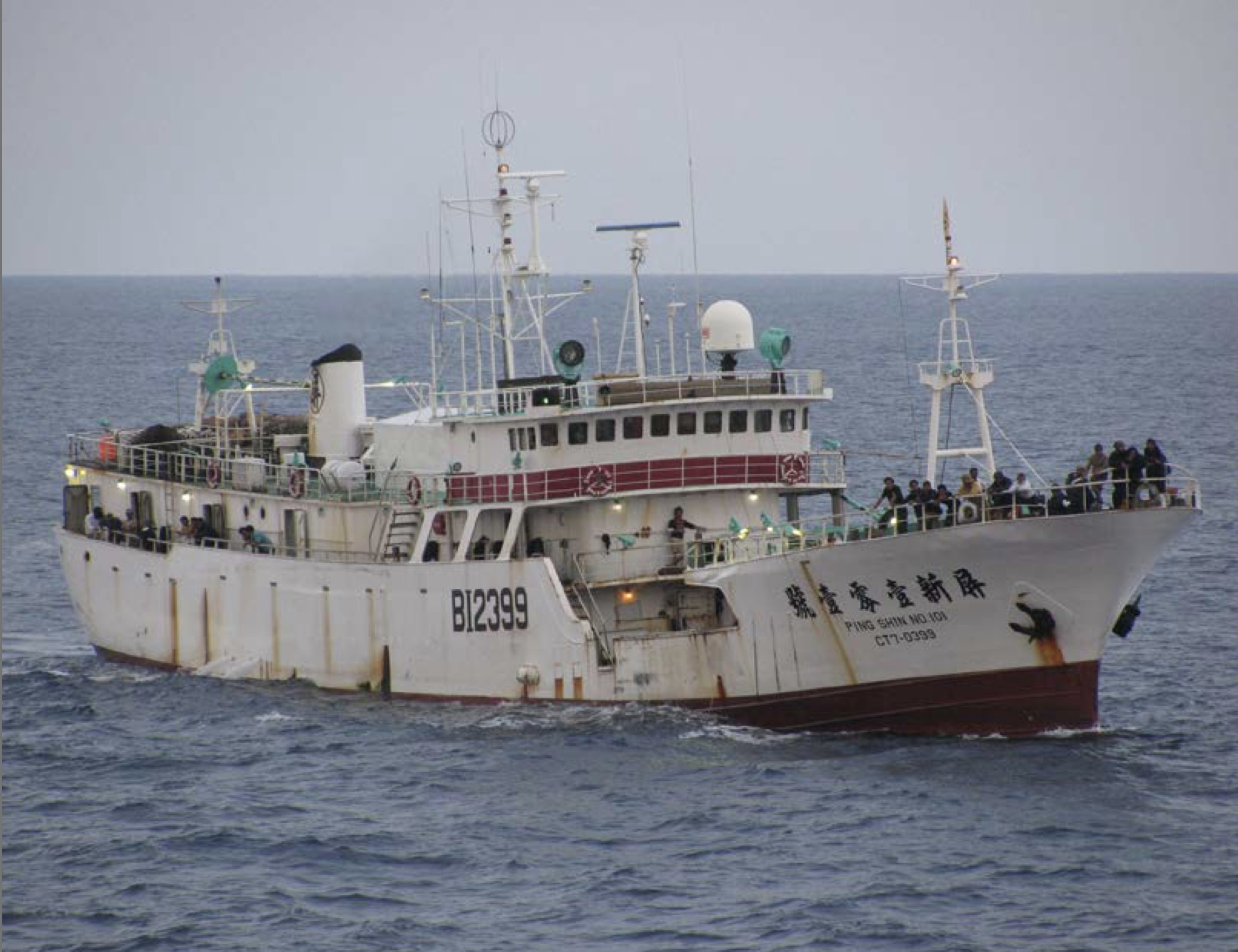 The men are helpless in the open water, clinging to floating debris, tossed by the rolling ocean waves. Several large fishing ships circle. None of the victims have life jackets, but no one makes a move to help. This isn’t a rescue.

A voice, off camera, shouts in Mandarin: “In the front, to the left! What are you doing?” Then: “Fire! Fire! Fire!”

Bullets spray the water around one failing man. One round catches him. His body stills. Blood plumes in the blue ocean. Later, deckhands laugh and pose for photos.

Grainy video of the 2012 killings, which shows the systematic slaughter of at least four men in the Indian Ocean, has been circulating in the darker corners of the Internet for more than seven years. In August, Taiwanese authorities arrested a suspect: a 43-year-old Chinese national whom they believe to be the man who shouted the orders to kill. Investigators hope he leads them to others. On Friday, Jan. 29, prosecutors convicted Wang Fengyu of homicide and for violations of the Controlling Guns, Ammunition and Knives Act, the prosecutor’s office said.

There were at least four tuna longliner ships on the scene of an incident that unfolded over more than 10 minutes in broad daylight. But no law required any of the dozens of witnesses to report the killings — and no one did. Law enforcement in the open ocean is limited, and jurisdiction is complicated. Authorities learned of the killings only when the video turned up on a cell phone left in a taxi in Fiji in 2014. The video in question can be seen HERE, courtesy of The Outlaw Ocean Project. Due to the very sensitive content, authorization must be given by an adult to view the clip.

An unknown number of similar killings take place each year — deckhands on the ship from which the video was shot told a private investigator, and later a documentary crew on camera, that they’d witnessed a similar slaughter a week before.

The footage, shot from the Ping Shin in what appears to be the aftermath of a wreck, is chilling. One man in the water raises his arms over his head, palms open, in what looks like an attempt to surrender. A bullet drills into the back of his head, knocking him facedown. His body floats, lifeless.

Trygg Mat Tracking, a Norwegian research firm that focuses on maritime crime, identified the Ping Shin 101 by comparing video footage with images in a maritime database. Former deckhands were identified through Facebook and other social media platforms where they had discussed their time onboard. Interviews with these former deckhands, some of whom said they witnessed the killings captured in the video, revealed the name of the captain and details of the incident.

Officials from the Indian Ocean Tuna Commission, which licenses commercial fishing in the region where the killings occurred, and the Taiwanese flag registry, which is responsible for enforcing laws on Taiwanese-flagged ships, declined to provide information about the crew, the captains at the scene, the ships’ routes or their recent ports of call.

“It is nearly impossible to police the open ocean, and sometimes people take matters into their own hands, as was the case here,” said Klaus Luhta, vice president of the International Organization of Masters, Mates and Pilots, a seafarers union. He noted that the men appeared to be unarmed and defenseless, and not to pose a threat.

“Whether this was some sort of vigilante justice or coldblooded killing for reasons unknown,” he said, “we see clearly it is a vicious murder at sea.”

Such killings will continue to go unchecked, Luhta said, without better tracking of offshore violence, more transparency from flag registries and fishing companies, and more effort by governments to prosecute the perpetrators.

Prosecuting such crimes matters, U.S. Naval Academy historian Claude Berube said, because what occurs at sea affects everyone. By some estimates, 90 percent of world trade is moved by sea; seafood is a major source of protein for much of the world.

“The public should be concerned with crimes at sea because those crimes don’t start or stop at sea,” Berube said. “They have land-based networks that affect lives and economies.”

But lawbreaking can be countered only when it’s reported, that rarely happens offshore. Shipping and fishing companies, maritime insurers, private security firms, embassies and flag registries track violence at sea to varying degrees, but there’s no single comprehensive centralized or public database.

The Stable Seas program of the Colorado-based One Earth Future Foundation has been granted access to much of that information. Former U.S. Navy officer Jon Huggins, a senior adviser to the program, says the data includes a variety of crimes: robbers siphoning fuel, hijackings, human trafficking, piracy.

When program officials tried to convince the groups that gathered the data to make it available to the public, Huggins said, they pushed back. Risk management companies asked why they should share data they could sell instead. Coastal states worried it might scare away business. Flag registries were reluctant to release information that might oblige them to act, which they had little motivation or ability to do.

Complaints of crime at sea are rare. Berube lists the reasons: Many ships lack the insurance that would make reporting worthwhile. Captains resist prying investigations that can cause delays. Most countries lack blue-water navies or coast guards that patrol beyond their territorial limits; they have neither the financial ability to patrol international waters of uncertain jurisdiction, nor much interest in doing so.

“We saw those challenges with Somali piracy a decade ago,” Berube said. “Merchant ships were largely told that they were on their own, and they took on private security teams in the absence of national or international support.”

Nonetheless, much has been learned about the 2012 killings. Two Filipino deckhands on the Ping Shin 101 named Aldrin and Maximo — they shared only one name — told a private investigator on camera that they witnessed the killings. In the video of the incident, Maximo can be seen smiling and posing for selfies after the shooting. He wears an oversize blue T-shirt that reads “Hang 10.” A deckhand on the Chun I 628, another ship at the scene, also described the incident.

The Ping Shin was fishing in the Indian Ocean somewhere between Somalia and Seychelles in August 2012, Aldrin and Maximo told private investigator Karsten Von Hoesslin in videotaped interviews, when it received a radio alert that a nearby ship had come under attack by pirates. It was unclear which ship was being attacked; there was yelling back and forth, the witnesses said. The supposed pirates seemed to be unarmed.

The Ping Shin 101 was fishing in the Indian Ocean in 2012 about 370 miles southeast of the Somali capital of Mogadishu when it, along with the Kaohsiung-registered Chun I No. 217 and two other unidentified fishing boats, were fired on by a pirate ship with four pirates, according to Taiwanese prosecutors.

Deckhands aboard the Ping Shin 101 opened fire, and the men in the smaller boat leaped into the water. Some began yelling that they were not a threat. “No Somali!” one deckhand heard them say. “No pirates!”

Wang Fengyu claimed that it was in self-defense at the time but the court ruled that he ordered two private maritime security guards from Pakistan on board the Ping Shin No.101 to shoot and kill four suspected Somali pirates that day even though they were no longer a threat.

A Vietnamese crewman who witnessed the shooting and that the prosecutors identified only through his surname, Tao, testified during the trial that the order to shoot in the video sounded like Wang’s voice.

There’s no indication that the two Pakastani guards who fired the weapons will be investigated or charged for their role in the murders.

According to ship tracking records, the 165-foot Ping Shin 101 was owned by a Shanghai business executive named Lee Chao Ping, principal of the Ping Shin Fishery Co. Ltd. in Kaohsiung. Efforts to reach Lee were unsuccessful. Online records show that the business closed in 2018. A security guard at its former address said in September that there was a Ping Shin or Ping Hsin fishery in the building some years ago but that the office had since closed.

Interpol and a private investigation firm that specializes in maritime crime have also been unable to find Lee.

Duncan Kawino, who said he worked on the Ping Shin 101 when it docked in Mombasa, Kenya, in 2013, said it fished mostly in Somali waters, but reported that its catch came from Seychelles waters, where he said it had a license. The Ping Shin 101 and the Chun I 628 had three armed guards each, all Pakistani, the witnesses said. The video shows at least four men being killed, but Aldrin and Maximo said it’s likely that more were shot — possibly 10 to 15.

Even though the captain said the men that were shot were pirates, witnesses interviewed in the course of the investigation that led up to the trial contested this claim. “They didn’t have any guns, only fishing equipment on their boat,” Maximo said. “It was wrong, people getting shot. But there was nothing I could do about it.”

Nor was it an isolated incident: A similar confrontation occurred a week earlier, Aldrin said. The circumstances he described on camera for a documentary series were virtually the same: Alleged pirates were rammed, shot and killed, their bodies left floating in the water. A video that apparently captured the earlier attack was discovered by Trygg Mat Tracking, the Norwegian research firm.

The Ping Shin 101 eventually ended up on the ocean floor. The vessel sank on July 7, 2014, less than two years after the shootings captured on the video. Wang, still the captain, broadcast a distress signal citing a mechanical failure. “Something exploded,” one crew member said on camera.

More important to authorities, though, was the man who captained the vessel. Prosecutors say they spent time trying to track down the vessel, but the captain never reported for questioning, so a warrant for his arrest was issued on Dec. 28, 2018.

Wang was arrested on Aug. 22, 2020 after the ship he was in charge of, the Seychelles-flagged Indian Star, docked at Kaohsiung port. The fishing ship had a history of violations, including using forged licenses and fishing in forbidden areas.

On Friday, the three-judge panel ruled that the killing of the unarmed men showed that he clearly had no respect for human life. Wang has the right to appeal the ruling.

In the past twelve months, Taiwan’s fishing fleet has been the subject of criticism from environmental, labor, and human trafficking advocates as well as U.S. government officials. In March 2020, Greenpeace released a reportthat identified Taiwanese vessels and companies as some of the worst offenders of labor and human trafficking violations among fisheries. They also found widespread illegal fishing practices including shark finning and illegal transshipments.

In September 2020, the U.S. Department of Labor included fish caught from Taiwan in its Goods Produced by Child Labor or Forced Labor list. In January 2020 Fong Chun Formosa Fishery, a Taiwan-based company linked to illegal fishing and labor violations, acquired Bumble Bee, a major supplier of tuna to U.S. consumers.

*Ian Urbina is an investigative reporter and the director of The Outlaw Ocean Project, a non-profit journalism organization based in Washington, D.C., that focuses on reporting about environmental and human rights crimes at sea. It’s an honour for Maritime Magazine to help spread Ian Urbina’s outstanding work. Protecting the more vulnerable individuals trying to earn a living at sea and the very environment of the sea is paramount as far as we are concerned.