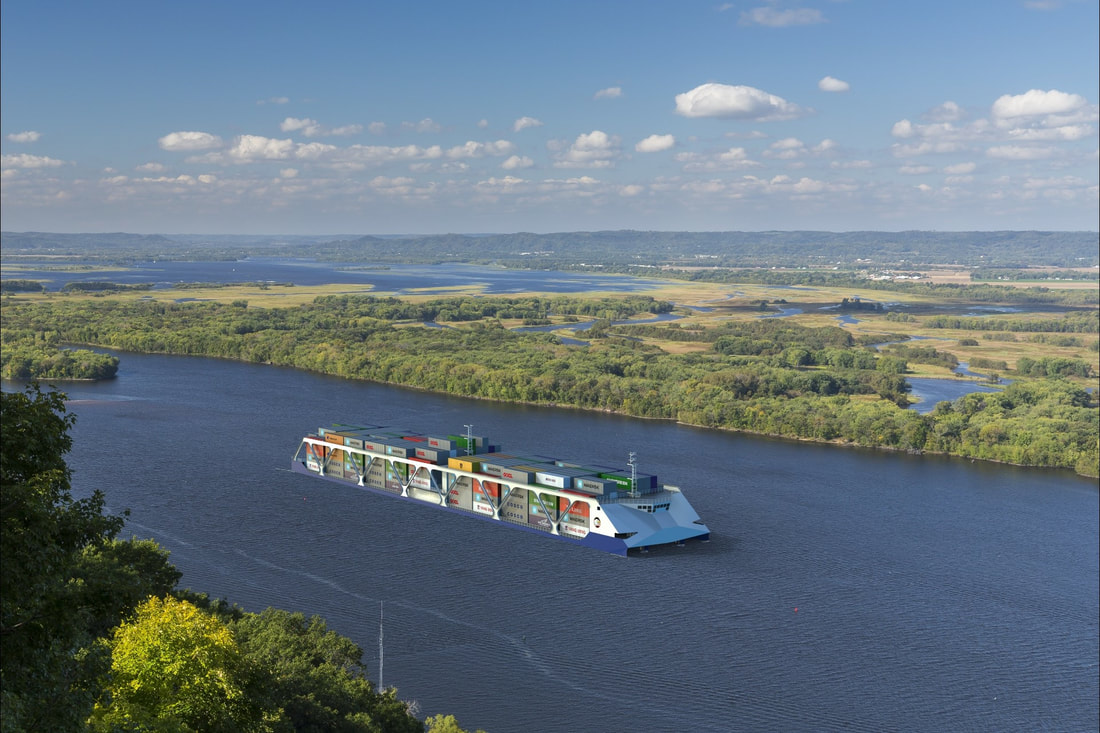 American Patriot Holdings, LLC (APH) on behalf of its subsidiary American Patriot Container Transport LLC (APCT), has issued a Request for Proposal (RFP) to seven U.S shipyards for construction of four firm Inland River Container “Hybrid” design vessels, with  options for up to four additional vessels built in direct continuation. The Hybrid design is the first of two designs planned to enter service on the Mississippi and its tributaries for APCT, operating at speeds over twice current river traffic, and without contributing to any shore erosion.

Shipyard responses to the RFP for firm pricing and delivery schedules are due by February 11, 2022. Final construction award by APH will be on or about April 1, 2022.

The Request for Proposal is for construction of river container vessels designed by Naviform Consulting and Research Ltd, a firm known for its research into hydrodynamics and structural design, developing new ship design technologies protected by patents. Two such patents protecting this design are in force in the USA and EU.

The Hybrid vessel power plant was custom designed to meet Owner’s upriver speed requirement of 13 mph against a 4-5 mph current. The propulsion plant includes four (4) Wartsila 6L34DFC generators, each with 2880 kW driving a combination of five Voith Schneider thrusters, three in the stern and two forward. The combined horsepower is 15,450.

The innovations in this vessel required very close collaboration with Wartsila and Voith Schneider to ensure operating performance and efficiency met the requirements of APH. Prior to final design modifications to optimize the hull form and power requirements, the vessel was model tested at SVA in Potsdam Germany.

The model testing results were analyzed by Voith Schneider and Wartsila to ensure operating performance and design specifications were satisfied. The new high efficiency Wartsila engines are dual fuel capable with LNG planned as the primary propulsion fuel. The engines are adaptable to methanol or other environmentally-friendly fuels if needed after startup. The vessels will be outfitted with state-of-the-art communication, surveillance, and navigation systems, including Dynamic Positioning equipment. The engine rooms will be fully automated with monitoring of the systems aboard the vessel and ashore.

Joe Gehegan, an Executive Member of APH said “These vessels will be the most technologically-advanced vessels in U.S Inland waterways, with numerous redundancies to ensure safe operations in all weather and river conditions including high and low water. The first four vessels will initially be placed in a dedicated service between the Louisiana Gulf Gateway Terminal, at mile 52 in Plaquemines Parish LA, and a new planned container terminal in Memphis TN, being developed by Hawtex Development Corporation and its Memphis partners. The initial four APH vessels will enter this service under a long term contract commencing upon synchronized startup dates for gateway ocean terminal in Plaquemines and the Memphis terminal, currently planned for April 1, 2024.”

Jim Hurley, President & CEO, of Hawtex Development Corporation said “Hawtex is excited for the opportunity the APH inland vessels will provide to a number of significant BCOs up and down the inland waterways of the central United States.”

Bob McCormack, an Executive Member of APH said, “Ocean carriers and Midwest customers expect safe, reliable, on-time, and environmentally-sustainable performance on the all-water routing of international containers. We expect to deliver that and more to our customers. Furthermore, Midwest shippers are feeling the significant impact of current supply chain failures, given their reliance on rail from the West Coast. We expect to give them a more reliable and cost effective supply alternative, and shippers are excited that the new logistic alternative has finally arrived.” (Artist rendering image by American Patriot Holdings)