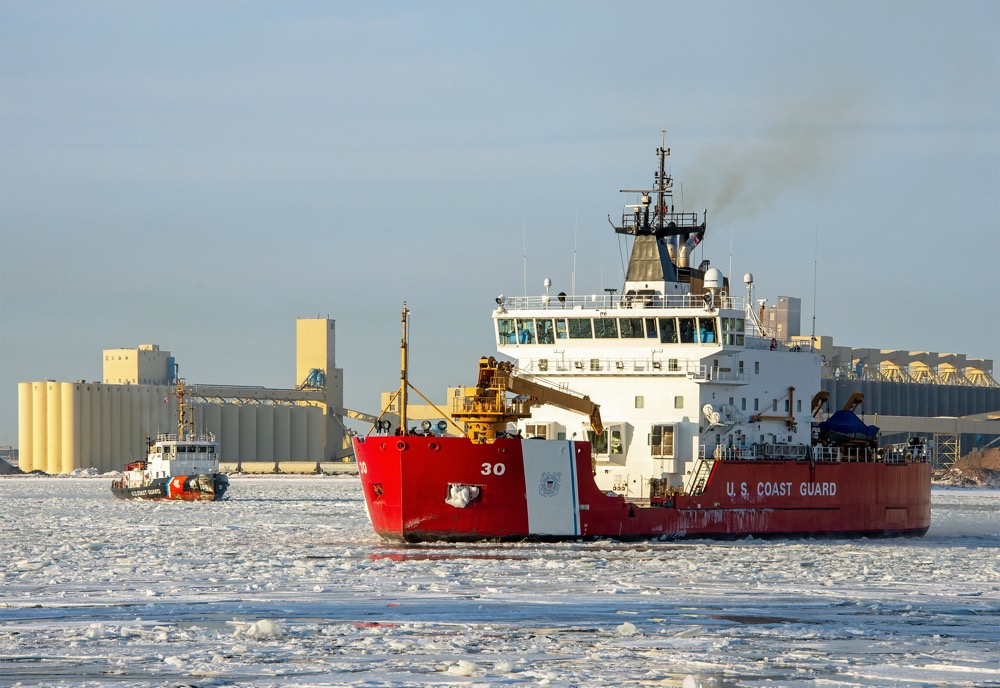 Great Lakes maritime stakeholders are delighted over a surprise decision taken earlier this week in Washington: the House Transportation and Infrastructure Committee approved $1 billion for U.S. Coast Guard shore side infrastructure nationwide and $350 million in funding for a second heavy Great Lakes icebreaker as part of its budget reconciliation bill. The decision was hailed by the Cleveland-based Great Lake Maritime Task Force (GLMTF) as “great news for the Great Lakes.”

But responding to Maritime Magazine, Eric Peace, spokesman for the Lake Carriers Association (LCA), stressed that a final go-ahead to begin construction requires the approval of full Congress.

“We are not there yet,” he said. “We still need this to pass the full Congress. Once the that is done, the USCG can start the building process. The sooner the better!”

Commissioned in 2006, the Mackinaw (WLBB 30) is presently the sole heavy icebreaker of the U.S. Coast Guard operating on the Great Lakes. When weather conditions have been exceptionally severe, icebreakers from the Canadian Coast Guard have helped to open ice-congested channels under longstanding cooperation between the two countries.

In a press release, the GLMTF described the heavy Great Lakes icebreaker as desperately needed and expects that a portion of the infrastructure funds will go to good use replacing and repairing crumbling Great Lakes search and rescue stations and other USCG facilities that are used to protect Great Lakes ports and waterways.

The GLMTF views a new heavy Great Lakes icebreaker as a step in the right direction for correcting years of economic devastation when commercial vessels have been trapped in ice for days and unable to deliver critical cargoes vital to the nation’s economic security.  The icebreaker is also the most valuable tool to combating ice jam flooding on rivers in the Great Lakes region.

Unfortunately, too late for residents in the Detroit area who suffered catastrophic damage in February 2021 while the USCG’s only heavy Great Lakes icebreaker was in a maintenance period and unable to respond.

« We are very pleased with this large step toward significant progress in maintaining navigable commercial shipping lanes on the Lakes for a greater part of each year, » said Great Lakes Maritime Task Force President John Clemons, who serves as American Maritime Officers National Vice President, Great Lakes. « A new and needed heavy icebreaker is crucial to U.S. commerce and will extend the ability of U.S.-flagged lakers to deliver the materials that fuel American manufacturing. AMO and American Maritime Officers Service will continue working together with members of Congress and our labor and industry partners on the task force to see this through to completion. »

« The SIU is very pleased to see funding for Great Lakes icebreaking being included in the package that was marked up.  This is a critical safety issue for our members on the Great Lakes, and we are looking forward to seeing this funding being enacted into law, » Michael Sacco, President, Seafarers International Union.

“These appropriations are extremely important to the Great Lakes and the national economy,”  said Jim Weakley, Vice President of GLMTF and President of the Lake Carriers’ Association. “Three hundred fifty million dollars for a heavy Great Lakes icebreaker will pay for itself in a few years as it safely moves American shipping, keeps Great Lakes ports and facilities open for business, protects U.S. sailors and shoreline communities, and ensures jobs for hundreds of thousands of shoreside workers.”

“This is a signal that the Great Lakes are important to Congress and the nation.  Another heavy Great Lakes icebreaker is needed now to keep Wisconsin’s waterways reliable as the most efficient means of moving critical raw materials to manufacturing facilities around the Great Lakes,” declared Mark Ruge, President of Wisconsin’s Domestic Maritime Coalition.

“Port Milwaukee strongly supports federal funding for a new Great Lakes icebreaker,” said Adam Tindall-Schlicht, President of the Wisconsin Commercial Ports Association and Director of Port Milwaukee. “A second icebreaker will enhance the U.S. Coast Guard’s operations and prove invaluable for both the regional economy and continued safety on the Great Lakes.”

Such an initiative was also strongly endorsed by Deb DeLuca, Executive Director, Duluth Seaway Port Authority, and Kyle Burleson, Director of Port Operations for the Detroit/Wayne County Port Authority.  (Photo of Mackinaw in action in Duluth by David Schauer)