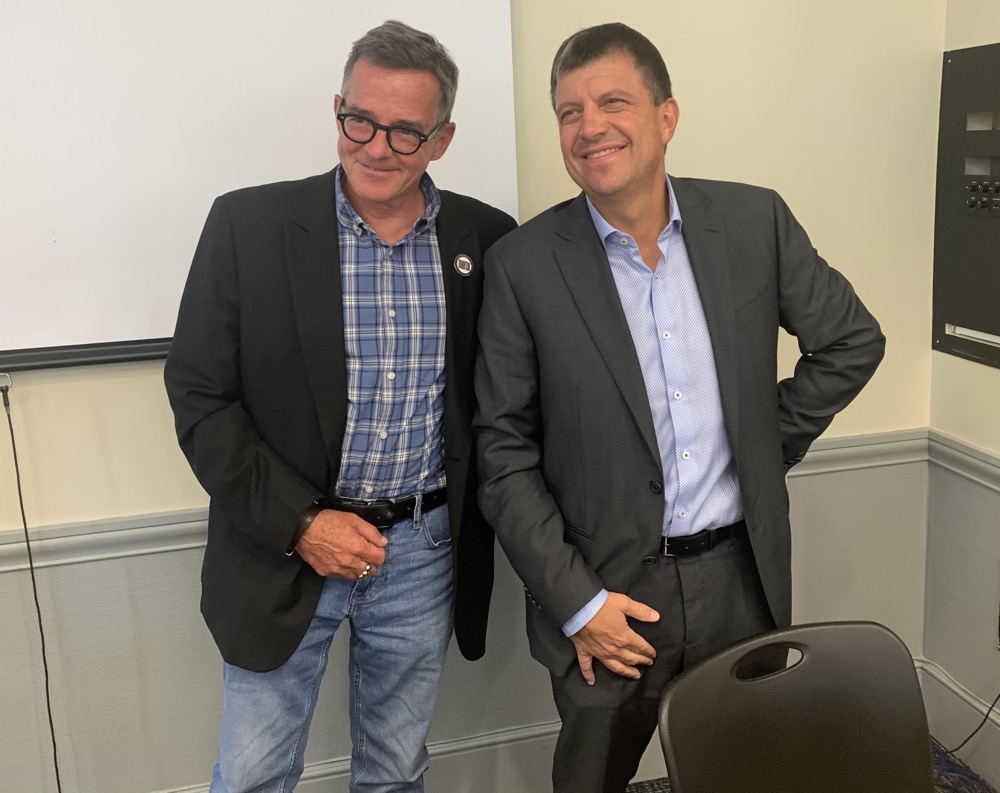 Normal operations at the Port of Montreal are to resume early Sunday after the Maritime Employers Association (MEA) and the union representing 1,125 dockers today announced an agreement in principle for a 7-month truce during which negotiations will focus on a significant “modernization of labour relations.”

On the 12thday of a general strike, the news was announced at a rare joint press conference of the heads of the employer and docker entities in Canada’s second-biggest port: Martin Tessier of the MEA and Michel Murray from the CUPE 375. A similar accord was also announced with the checkers union.

A key feature of the truce is the undertaking by both sides to abstain from pressure tactics, such as strikes or lockouts, and from making any public comments on the course of the renewed negotiations to conclude a new collective agreement to replace the one which expired on December 31, 2018. Biggest outstanding issues have revolved around work hours and scheduling.

Amidst increasingly urgent appeals by business groups and most recently by the Quebec and Ontario governments, federal Labour Minister Filomena Tassi had refused to intervene, evoking her belief in the bargaining process.

Quebec’s prominent industry association, the Conseil du Patronat (CPQ), was quick off the mark today to hail the truce, pointing out that the disruptions at the Port of Montreal “had taken the whole Quebec economy hostage.”

Also offering reaction rapidly was Sylvie Vachon, President and CEO of the Montreal Port Authority, who said the port will be able to resume its key role as the driving force behind Greater Montreal’s supply chain, to the benefit of Canadian importers and exporters.

Tensions had mounted over the past few days when the MEA had threatened to use replacement staff to at least move COVID-related container cargoes. In addition, close to a dozen vessels were being rerouted to other East Coast ports – notably Halifax, Saint John and New York. The Port of Montreal has been hit by a series of work stoppages since early July.

In his remarks, Mr. Tessier candidly stated: “Sometimes, one has to hit the bottom of the barrel to rebound. “It is the first time in 50 years that the employer and union parties move forward together (s’avance ensemble) in front of the medias. He underlined a concerted effort “to modernize our labour relations…hopefully for the next 10 years.”

Both Mr. Tessier and Mr. Murray acknowledged that the events of the past few weeks could not continue and that it was vital to get the Port of Montreal “back on track.”

They also recognized the vital role played by the longshoremen in the success of the Port of Montreal and expressed confidence that a final deal will be reached before the March 2021 deadline set.

“What we want to do is to work together,” said Mr. Tessier.

“The Port of Montreal is the foundation of the logistics chain in Eastern Canada, in my mind,” concurred Mr. Murray during a demonstration of consensual views contrasting with the rather sharp public bickering of recent months.