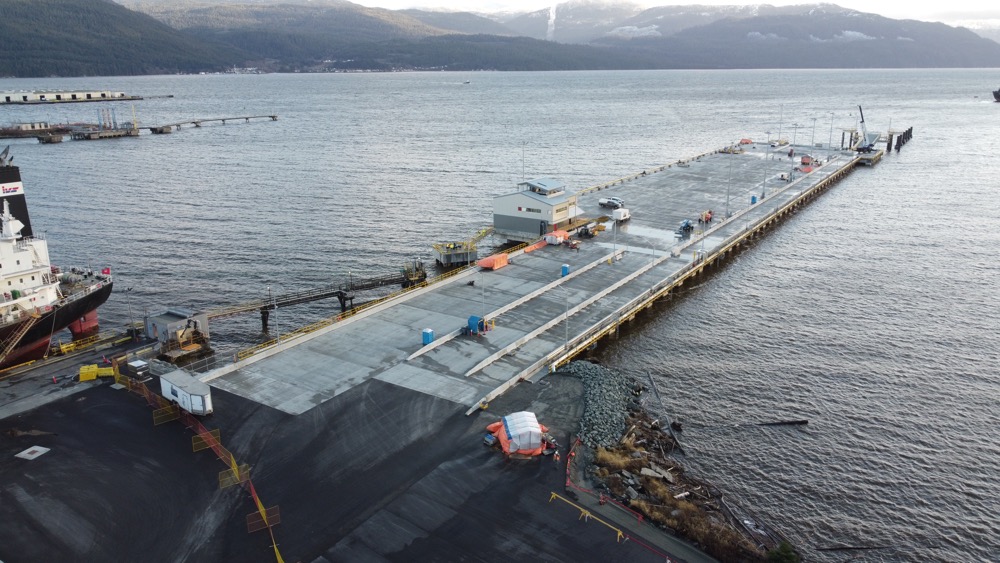 Kitimat, BC – Rio Tinto and LNG Canada have opened a newly extended wharf that will increase the capacity of Rio Tinto’s port facilities in Kitimat and support economic diversification in Northern British Columbia.

The new wharf was built for Rio Tinto at its existing Terminal A facility by LNG Canada. It will replace a wharf and land leased to LNG Canada in 2018 for use to start exporting liquefied natural gas to overseas customers. Rio Tinto will use the new wharf for imports of alumina, anodes and other supplies for its operations, and exports of low-carbon aluminium made at its BC Works smelter.

The first ship was berthed on December 6 at the wharf, which can now accommodate larger vessels ranging between 200 and 250 metres in length.

Rio Tinto Aluminium interim managing director, Atlantic Operations, Sébastien Ross said: “Rio Tinto has been operating in the port of Kitimat since 1954. This new wharf offers new safety features for our people, additional metal storage capacity and the ability to host larger ships. We look forward to continuing our work with LNG Canada, First Nations partners and the local community to support a diverse economy in British Columbia through this strategically located port.”

LNG Canada chief executive officer Peter Zebedee said: “LNG Canada is committed to ensuring that benefits from our project flow to local and Indigenous communities, and across British Columbia and Canada. The Rio Tinto Terminal A extension demonstrates this commitment in action, with more than 20 local and B.C.-based businesses and Nations engaged with the project over 36 months of construction. As of December 2021, LNG Canada and its contractors and subcontractors have awarded CAD $3.5 billion in contracts and procurement to business in B.C. Of this amount, approximately CAD $3 billion has been awarded to First Nations-owned businesses and local area businesses.”

Haisla Nation Chief Councillor Crystal Smith said: “Our vision at Haisla Nation Council is to ensure our members have the opportunity to work in rewarding careers, especially ones within Haisla territory. We are proud that there has been this opportunity for our members to participate in the expansion of Terminal A, giving them the chance to work at home and giving them the skills and experience that will transfer to future opportunities.”

District of Kitimat Mayor Phil Germuth said: “The development of the new Terminal A wharf is a major feat of engineering and construction, which speaks to the level of skilled workers we have operating in our community. However, it also speaks to the spirit of partnership and cooperation in our community. By working together, LNG Canada and Rio Tinto B.C. Works were able to find solutions that result in mutual benefit and shared prosperity, not just for themselves, but for the entire community, region, and Nation. And that is something that should be celebrated!”

Construction of the wharf began in December 2018. It involved building a 20,000 m³ concrete deck supported by more than 400 steel piles to extend Terminal A and adding a deep sea hydraulic barge ramp. Contractors from the Haisla, Kitselas and Kitsumkalum First Nations contributed to the completion of the project by providing a variety of services, including IT support, marine transport, industrial construction and security services. (Photo Rio Tinto)