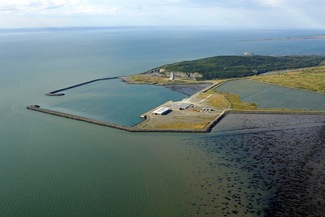 Within the context of the federal government’s 2015 Ports Asset Transfer Program (PATP), the St. Lawrence River ports of Matane, Gros-Cacouna, Rimouski and Gaspé, formerly administrated by Transport Canada, have been transferred to the Québec government, effective March 30. The agreement between the two governments comprises compensation of nearly $150 million from the federal government towards funding the future maintenance and operational costs of the four ports.

The management of the ports concerned has been confided to the Société portuaire du Bas-Saint Laurent et de la Gaspésie, a division of the Société du parc industriel et portuaire de Bécancour which falls under the umbrella of the Quebec Ministry of the Economy and Innovation.

In a press release, the Québec Ministry of Transport described the asset transfer as « an important step for the maritime development of Québec. By becoming owner of these installations, the Québec government will ensure their future and can develop an integrated vision of maritime activities on the St. Lawrence. »

PATP succeeded the earlier Port Divestiture Program (1996-2014) which has involved the sale or divestiture of Transport Canada-owned facilities to local interests. The original objective was to transfer 549 local/regional ports from government ownership. Since inception, more than 500 facilities have been divested, and under 50 ports today remain under Transport Canada’s inventory. (photo of Gros-Cacouna from Marinas.com)