On our FORUM: A mounting dilemma: burning boxes on the world’s containerships 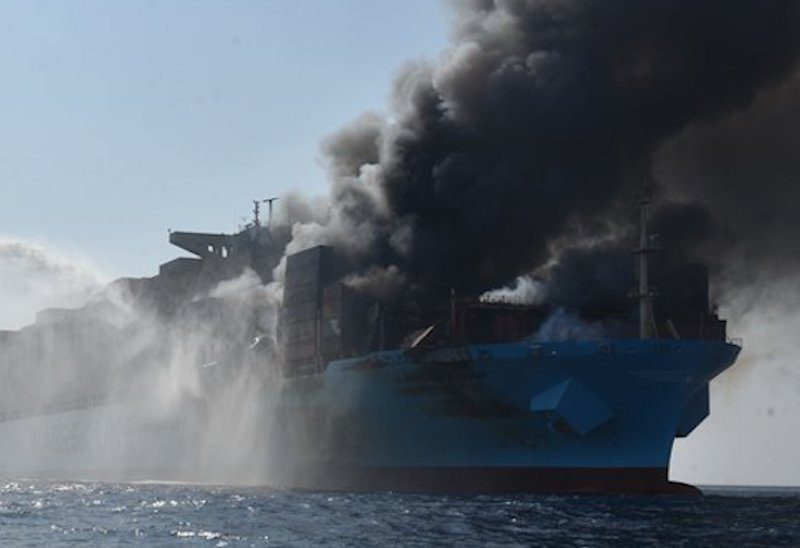 There has been no end of sincere concern expressed about the frequency of fires inside containers, which are still running at a rate of one serious event every six weeks on average. This statistic never seems to change from one year to the next, and that doesn’t begin to do justice to the less serious events, which can be just as traumatic for those charged with extinguishing the fires, with the limited equipment and capability available aboard ship.

It had been hoped that rather greater attention paid to the identification and verification of dangerous goods might be making a difference, along with some more muscular intervention by carriers in fining those who have played fast and loose with declarations. Maybe there will be an improvement, in time, if the message gradually permeates to those who ship and stuff containers, and if the biggest carriers take a more robust position with careless and criminal shippers.

Meanwhile it was encouraging to read of an initiative in which the European Maritime Safety Agency is being joined by a number of partners to produce a Formal Safety Assessment study on containership fires. The work will be supported by the Research Institute of Sweden and the University of Southern Denmark and there will be a major role for the Danish Institute of Fire and Security Technology. The study should be completed by February next year and will hopefully produce some practical and cost-effective risk control measures in the fields of prevention, detection, containment and firefighting techniques. It is expected that the various workshops will bring in some prominent ship registers, sea carriers, equipment suppliers and interests down the logistics chain.

It sounds encouraging, but the fires are still occurring and there is increasing concern at the number which seem to be attributed to lithium batteries, which find their way into all sorts of products being shipped. While the main concern about these seems to be devoted to electric vehicles being carried on ferries, car carriers and such vessels, the risks attached to our “electric future” are only slowly being grasped by regulators and others. Almost certainly because of the potentially deadly consequences of fires from devices and appliances, the aviation world, as always, seems to have woken up to the risks rather faster than shipping, but the maritime world needs to look more seriously at the potential danger of all sorts of cargo that appears, almost from nowhere, in a changing world.

Meanwhile, the container ships themselves get bigger, the heights of the stacks and the width of the stow making the successful intervention by the pathetically small crew ever less likely. It is sometimes difficult to avoid the conclusion that while there is no shortage of well-meaning regulatory debate about the fire safety issues, the people who could perhaps make a difference prefer to adopt a sort of percentage approach, where as long as they are seen to be doing their best, the insurers will pick up the pieces. That’s the whole point of insurance, they say, and as long as something like a Maersk Honan doesn’t happen too often, they can cope. The insurers themselves try and keep the pressure on for more positive action, but while they are politely listened to, they are not part of the technology.

If there was some honesty about this problem, some might admit that it stems from a cavalier approach to the attitudes of carriers to shippers, which have traditionally worked on the assumption that “the customer is always right”. And if one carrier wouldn’t accept your horrible or potentially hazardous cargo, there would always be an alternative, possibly even, through slot chartering, aboard the same ship that initially rejected the frightful stuff.

As long as ships remained at a manageable size, and deck stows reasonably “get-attable”, ships’ crews could generally cope, but the sheer scale of the present problem with boxes up to ten high on deck and 25 across, means that you have to be very lucky and very brave to have a chance of controlling a DG fire in the stack, far from a well-equipped port. It might be considered heresy, but wouldn’t a better idea be to carry the hazardous stuff under deck, where there might be a chance to suffocate a conflagration. Maybe the latest study will come up with some bright ideas for tackling fires aboard a 400m long monster, which don’t immediately get canned by the carriers as impractical, or as has happened in the past – too pricy.

Nota: Photo taken by the Indian Coast Guard shows the Maersk Honan burning in March 2018 while en route from the Arabian Sea to Suez. Five crew members perished. The ship was re-built and re-named Maersk Halifax.