On our Forum: A literary look at plastic pollution and the issues it raises 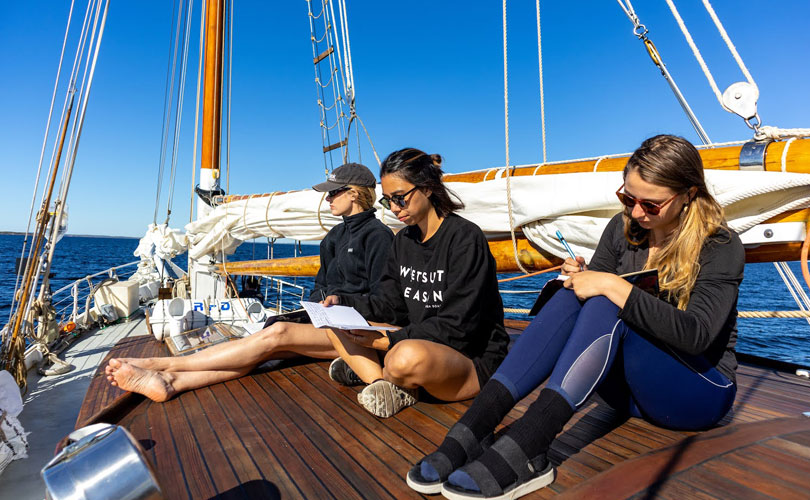 Last September, UQAR researchers in creative writing ended their journey aboard the ship ÉcoMaris to document plastic pollution on the Gulf of St. Lawrence. A two-week stay allowed them to observe a high concentration of waste resulting from the lifestyles of the last decades.

Over a quarter of a tonne of waste was collected from ten sampling stations at sites protected by provincial or federal institutions. “We were shocked by the environmental disaster we witnessed,” said Anne-Marie Asselin, head of mission for the Blue Expedition and CEO of Organisation Bleue.

Led by Professor Camille Deslauriers, master of letters students Erika Arsenault and Tina Laphengphratheng took part in the expedition funded by the Réseau Québec maritime (RQM). An experience of literary creation in situ that led them to think sensitively about the environmental issues related to plastic pollution.

“The presence of litter among the incredible landscapes of the Gulf of St. Lawrence has often created tensions—between wonder and desolation, serenity and anger, hope and renunciation. I wanted to reveal them in order to try to raise awareness of what remains invisible. I am thinking of the microplastics that roam the surface of the waters of the entire planet and that are ingested by many organisms, the movement of waste by tides, places almost inhabited by humans and yet contaminated with waste.” mentions Ms. Laphengphratheng.

Throughout the trip, the UQAR researchers told of their experience in a logbook published on the Organisation Bleue website. Professor Kateri Lemmens and other crew members also contributed to the writing.

“It is important for me to give the general public and the community a chance to be informed and to understand the problems affecting our own territory, the one surrounding the Gulf of the St. Lawrence, by offering a different way of accessing scientific research, through the literature. This trip allowed me to develop in my field of research, learn from other disciplines and get to know a part of my province better,” explains Erika Arsenault.

Beyond the observation of plastic pollution, the Organisation Bleue team wishes to continue its efforts to preserve the St.Lawrence. It calls on the public to support it in a campaign of crowdfunding

“The Bleue expedition provided an initial portrait of the impact of plastic in the Gulf of St. Lawrence and along its coastline, which will pave the way for other collaborative research and innovation projects. To address complex maritime issues in a concerted and synergistic manner,” said Viridiana Jimenez-Moratalla, RQM Communications Advisor and team members aboard the Blue Expedition.

Founded in 2018, Organisation Bleue’s mission is to promote environmental conservation. The organization wants to create a new scientific culture by combining extension and enriching experiences for environmental awareness.