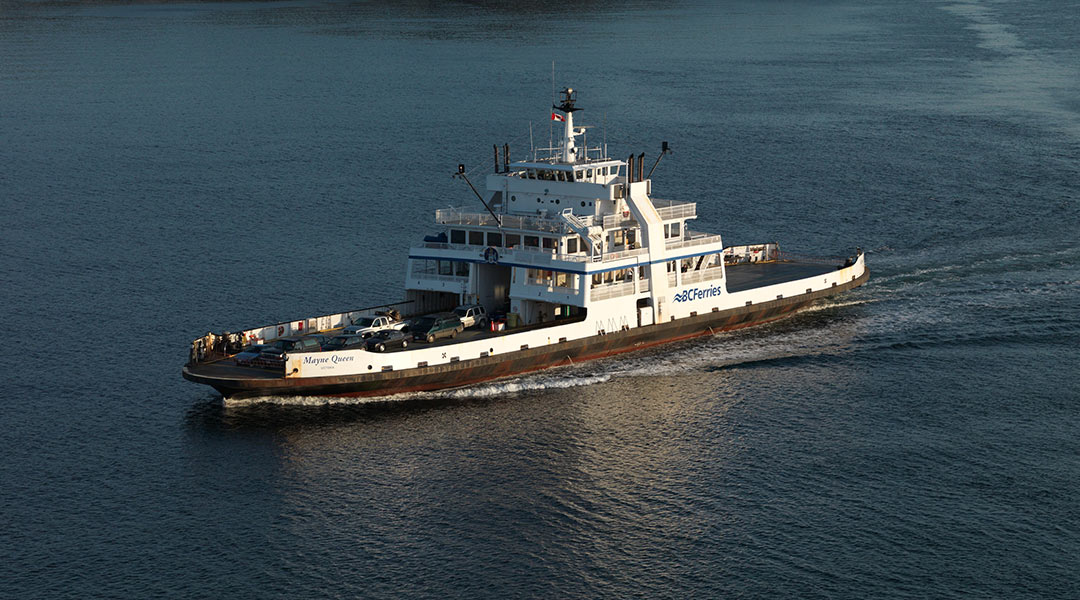 VICTORIA – November 19th is the last official full-time run for BC Ferries’ Mayne Queen, ending more than half a century of service for residents and visitors of the Southern Gulf Islands. It’s the kind of legacy that deserves a “victory lap” and in true rock star fashion the ship will perform an encore on Sunday November 20th to its familiar ports of call so the Islanders can say thank you one last time.

Priscilla Ewbank is one of those Islanders. She grapples, trying to express just how much the vessel means to them. “I came to Saturna on the Mayne Queen in 1970, and we rode the ship to bring our daughter home for the first time. It delivers medicine, groceries, everything, and us. It gives us a sense of belonging, an identity.”

Ewbank and her husband Jon would use the Mayne Queen to transport goods from their Haggis Farm Bakery to neighbouring communities and would count on it to supply their grocery store and café. The Ewbanks are just one of many families who have depended on the ship and crew for business, pleasure, and community connection.

The vessel first entered service 57 years ago in 1965 and for the vast majority of that time has served the same run through the Southern Gulf Islands. Insiders know it as Route 5, a tentacular connection between Vancouver Island, Pender, Mayne, Galiano and Saturna islands. Crew are family, quick to jump a car that won’t start or return to work in emergency situations. Urban legend suggests the Mayne Queen may have even reversed course a time or two for a backpack – accidentally left behind by children rushing to school.

Six decades ago, while working at Victoria Machinery Depot, Fred Thompson couldn’t have envisioned the emotional impact his work would have on the Salish Sea communities. He helped create the drawings that would become the Powell River Queen, the Bowen Queen, and the Mayne Queen.

“Back then we only knew them as the 50-vehicle ferries,” says Thompson. “When the machinery depot closed in the 60’s, I grabbed a couple of the drawings so I could show people my work as I looked for a new job.”

As fate would have it, one of those drawings is of the Mayne Queen and when his son in law, who lives on Mayne Island, learned of the ship’s farewell, he contacted Thompson to see if the ship designer wanted to be there for the final hurrah.

“Having worked on the drawings and seeing it in pieces before it was built, now that it’s retiring…I feel ancient,” laughs the 88-year-old Thompson.

Thompson will get a special tour of the bridge when the Mayne Queen pulls into Village Bay (Mayne Island) for the local celebration around 4 pm on Sunday. A full circle moment for Thompson and the final stop on the farewell tour.

The ship will get a similar hero’s send-off in Otter Bay (Pender Island), Sturdies Bay (Galiano Island) and Lyall Harbour (Saturna Island) where Ewbank will be part of the entourage. She has been a driving force behind the farewell tour, and the emotional conduit for the communities trying to convey what the Mayne Queen’s 1500 tonnes of metal, and her crew, have meant to them.

“It would take us on adventures and bring us home safe no matter the conditions”, says Ewbank. “It’s been a true lifeline for all of us. Every Islander has a Mayne Queen story. Every Islander lauds her dependability. We have been well served and thank the ferry and its crew. The Mayne Queen is ours!”

When the vessel pulls into Lyall Harbour, Ewbank will board the ship one last time and head towards a photo. It’s a picture the crew took of her husband Jon on one of the many journeys aboard the Queen. It shows Jon – who passed away from cancer – next to their island’s General Store truck. Ewbank will remove the photo and take it home. A final moment, and a final memory, made aboard a very special ship.  Source: BC Ferries