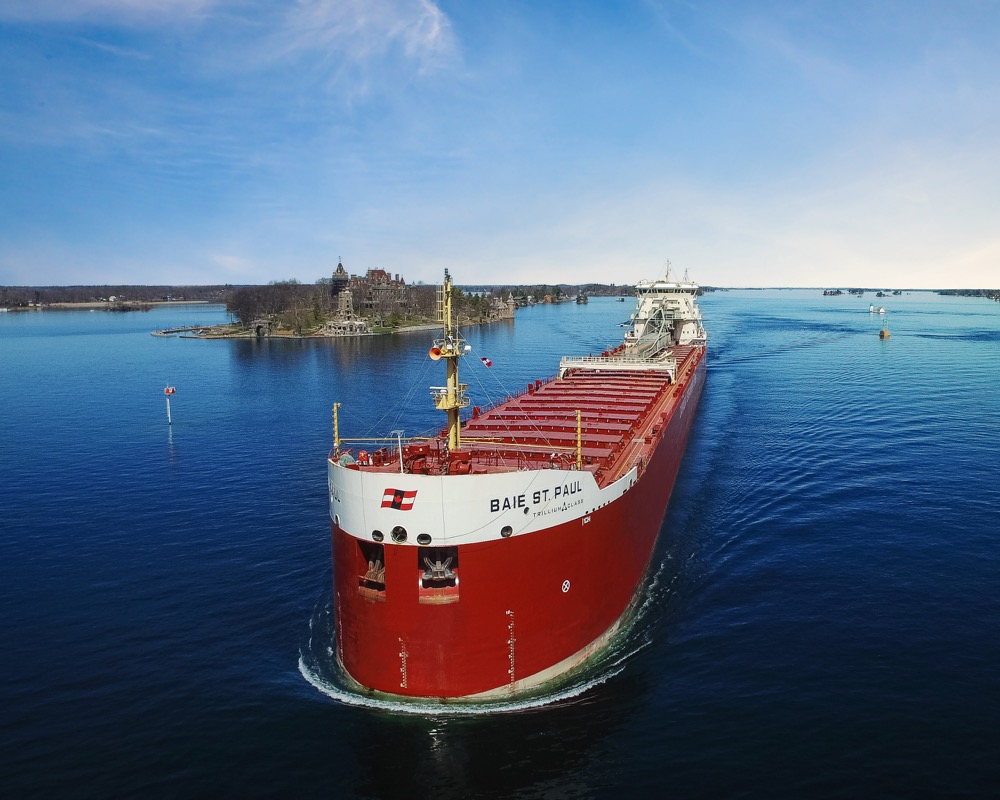 Canadian Great Lakes ports and the St. Lawrence Seaway are reporting an uptick in cargo shipments this season, a reflection of the economic upturn in North America. St. Lawrence Seaway cargo volumes from March 22 through April 30 totaled 4 million metric tonnes, up 3.7 per cent from the same time period in 2020.

Canadian grain, one of the strongest performers in 2020, is off to a strong start this year, up 15.5 per cent. The increase this year is being driven by Ontario soybean exports, corn and wheat via ports such as Hamilton, Windsor and Johnstown, along with robust Prairie grain exports out of the Port of Thunder Bay.

Construction materials, including cement shipments to Ontario and the United States, have helped boost the dry bulk category, up 1.6 per cent over 2020. Shipments of iron ore for Canadian steel production have increased 6.89 per cent and general cargo has risen 23.2 per cent due to increases of iron and steel imports from Europe and other overseas destinations.

“Shipments through April are a positive reflection of the recovering economies and growing demand for goods in Canada and the United States,” said Terence Bowles, President and CEO of the St. Lawrence Seaway Management Corporation. “The increase in construction materials is a welcome turnaround from 2020 and a promising start to the year.” 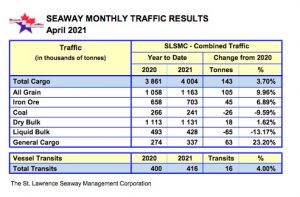 Following a robust 2020 crop, the Windsor Port Authority experienced a 30 per cent increase in grain shipments out of the gate in 2021. The Port also reports a strong volume in steel products as construction activity picks up in the region.

The Hamilton-Oshawa Port Authority (HOPA) 2021 shipping season is also off to a strong start as both ports’ navigation seasons began on March 24, reaching a combined 1.192 million metric tonnes of cargo through April 30.

Year-to-date, Hamilton is up over 20 per cent compared to the start of the 2020 season with dramatic increases in grain and fertilizer after a strong fall harvest and perhaps in anticipation of this year’s demand for Ontario-grown grain. Since the season opened, 66 vessels have transited Hamilton’s port, carrying grain, fertilizer, gypsum, petroleum, iron ore and other steel-making materials.

“As the economic recovery continues to gain momentum, the value of an integrated transportation network becomes increasingly apparent,” said HOPA Ports CEO, Ian Hamilton. “We look forward to strengthening the might of Ontario’s industries, with efficient and sustainable multimodal connections and data-informed decision making.” 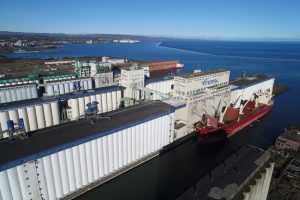 Port of Thunder Bay officials are also pleased with the start of their 2021 shipping season, as March shipments through the Port surpassed 300,000 metric tonnes for the first time on record. Through April 30, 1.27 million metric tonnes passed through the Port. Although this is down from the robust start to the 2020 season, cargo remains up 20 per cent compared to the five-year average.

The Port exported more than 1.15 million metric tonnes of Prairie grain and also received two shipments of steel in April that are destined for Western Canada projects, and expects to see a strong lineup of ocean vessels in May.

The 2021 shipping season at the Port of Toronto is also now in full swing, with bulk imports of cement, sugar and salt arriving, once again demonstrating the important role it plays in supporting Canada’s largest economy.

In addition to these essential materials, the port received special cargo on May 11 with the arrival of the 650-tonne, 83-metre long western half of the new Commissioners Street Bridge. This is the second bridge span to travel through the St. Lawrence Seaway from Dartmouth, Nova Scotia to the Port of Toronto as part of Waterfront Toronto’s Port Lands 2024 project. The eastern half of this bridge is expected to arrive in summer 2021.

Geoffrey Wilson, CEO, PortsToronto, said: “The port provides a crucial piece of the city’s economic infrastructure for the transportation of goods to support construction projects in the port lands, downtown core and Greater Toronto Area. While the Port of Toronto saw 11 deliveries of steel cargo in 2020, in the first four weeks of the 2021 shipping season alone, the port has received four such deliveries and anticipates the arrival of a number of ships carrying a variety of steel products in the month of May.”

The Port of Johnstown reported a busy April of deliveries, including aggregate, salt and corn imports that doubled grain revenues from the same time period last year. The run of shipments continued into early May with deliveries of steel beams for the region’s construction industry and windmill blades via the Symphony Star. 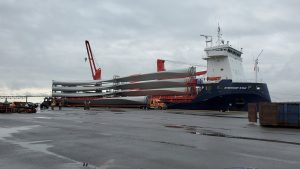 “We are pleased with the start of the season and, at this time, we have two additional vessels arriving at the end of May, so our season is definitely gaining steam,” said Robert Dalley, Port of Johnstown General Manager.

In addition to cargo deliveries, the Port of Johnstown is nearing the completion of its $12.5 million-dollar Grain Export Project, made possible by federal funding through the National Trade Corridors Fund. The project includes the replacement of nine spouts for loading grain onto vessels and three new state-of-the-art Neuro spouts to improve the efficiency of loading vessels destined for export markets. The improvements will decrease the turnaround time for vessels using the Port to export grain.

Sarnia Harbour, a deep-water port located where Lake Huron flows into the St. Clair River, is undergoing improvements to the recently named Cestar Dock, part of the Oversized Load Corridor project. Now in Phase 2, these improvements will facilitate the movement of oversized products from local fabricators to North American and international markets via a 26.7 km route to the Sarnia Harbour.

The Oversized Load Corridor project includes the addition of a specialized dock, Roll-on/Roll-off wharf improvements and an expanded load staging area. The project is estimated to cost $16 million upon completion in 2022. Funding is provided by municipalities and industry, the National Trade Corridors Fund, The Southwestern Ontario Development Fund and a generous donation from Cestar College. (Photo of CSL Baie St. Paul by Alexanne Brisson) 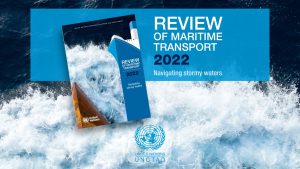 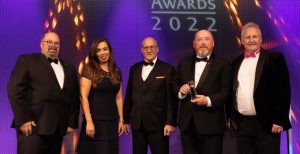