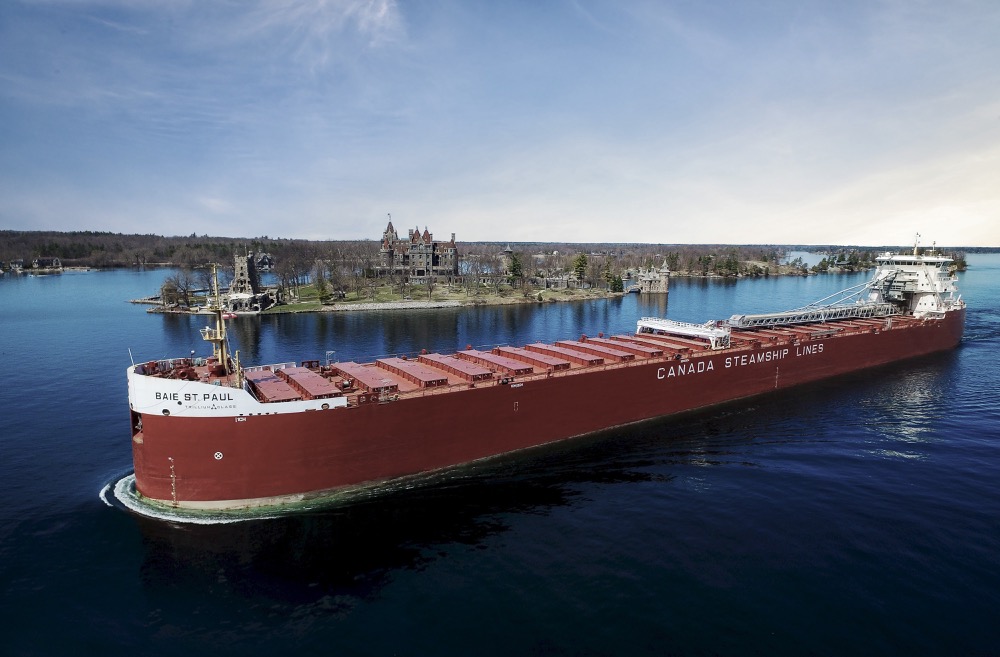 Cargo volumes through the St. Lawrence Seaway and Canadian Great Lakes ports remained robust in September as ships delivered critical commodities and products without the delays or supply chain disruption seen in other trade gateways, according to the latest results. From March 22 to September 30, overall cargo volumes via the Seaway totaled 24.1 million metric tonnes, up 2.6% from the same time period in 2020.

The total was boosted by increases in cross-border trade of cargoes like stone (55%), cement (7%) and gypsum (18%) for construction purposes. Year-to-date iron ore shipments, up 26%, showed no sign of slowing down as demand from Canadian and overseas steel producers continued.

General cargo shipments, including iron, steel and aluminum, are also up 59% at 2.3 million tonnes compared to this time last year. Ship operator McKeil Marine delivered over 41,600 metric tonnes of Canadian aluminum in September; up from 16,200 metric tonnes in September 2020. The majority of these volumes are being shipped to Toledo, Ohio. The improvement comes after U.S. steel tariffs were lifted in 2019/2020, although volumes have not yet completely returned to normal levels. McKeil’s aluminum shipping utilization is currently at 85-90%.

Following 2020’s blockbuster performance, Canadian grain shipments via the Seaway are down 17%; however still in line with the five-year average. Poor weather conditions have led to lower crop yields in the Canadian Prairies. On the other hand, Ontario corn and soybean harvests have begun and are in good condition.

“Our innovative trade corridor has the flexibility and adaptability to respond to the changing demands of the economy.  Grain is down this year, but our system is responding to a surge in other cargoes to supply many industry sectors with greater positive impact on the financial performance,” said Terence Bowles, President and CEO of The St. Lawrence Seaway Management Corporation. “While global supply chain routes have become disrupted and backlogged due to the pandemic, Canada’s Great Lakes-St. Lawrence Seaway shipping routes remain reliable, safe and congestion free.”

Mr. Bowles’ remarks on resiliency in the region are echoed by the Hamilton-Oshawa Port Authority’s President & CEO, Ian Hamilton, “What we’re seeing in cargo at our ports makes us optimistic for the path the regional economy is on.”

Mr. Hamilton added, “In particular we’re pleased to see strong manufacturing-related indicators like steel-making commodities and finished steel. Compared to this time last year, HOPA Ports has received 25% more iron ore (two million tonnes) and more than a million tonnes of steel has moved through the ports so far this season. This is an encouraging sign of demand in the manufacturing and construction sectors.”

Further west, Port Windsor’s mark of resiliency has also shown throughout the pandemic recovery. Aggregate shipments are up 14%, and steel, up 100,000 tonnes, continue to lead economic recovery. Grain is down slightly (-11%) but the Port expects it to rebound as the local fall harvest begins. Ferry traffic for oversized and dangerous goods has seen 33% more crossings and a 76% increase in tonnage.

The Port of Thunder Bay continues to feel the impact on grain shipments as well, as the Prairie harvest yield hits a 10-year low and year-to-date grain shipments in Thunder Bay are 5% below the five-year average. In September, monthly grain loads were down 30%; mirroring estimates by crop analysts of a 30% reduction in crop yield this season.

However, potash shipments out of the port in September doubled the monthly average. Canadian potash producers earlier this year signaled strong production for the second half of 2021. Canada is the largest potash producer in the world. Thunder Bay is on track to set a 4-year high for potash shipments in 2021, with most shipments heading to Belgium. Thunder Bay also received a 220-tonne gas turbine generator at Keefer Terminal in September. The first in a series of heavy lifts and breakbulk cargo scheduled at Keefer Terminal this fall, the shipment components will be further transported to Western Canada by truck and rail.