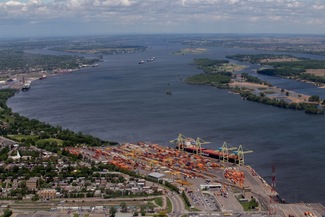 While arguably fully operational amid the Covid-19 health crisis, Canada’s leading container ports are gearing up for big cargo declines in April, with the heaviest impact to date of the pandemic expected to strike in May.

In an interview, Tony Boemi, Vice-President of Growth and Development for the Port of Montreal, disclosed that the first quarter of this year somewhat surprisingly showed a 5.6% rise in container traffic, with  double-digit increases with Asia, the Mediterranean, the Midwest, Africa, and the Middle East. There was even a moderate increase of 2% with Europe, among the world’s worst hit regions.

However, Mr. Boemi anticipated cargo drops in the last two weeks in April – « and May could be a doom and gloom month with peaks in the wrong direction. Consumer goods are down. Imports from Asia are now down because of reduced demand and limited warehouse space. »

Another factor contributing to likely overall decline this year (too early to estimate) is falling exports to Asia because shippers are having difficulty booking space on trans-Atlantic vessels to Europe, where they would be usually transshipped onto vessels bound for Asia.

At the Port of Prince Rupert, Brian Friesen, VP Trade Development and Communications, noted that at the end of February, intermodal volumes had actually increased year-over-year. « However the March performance report is not yet available. There were a number of blank sailings in March, and we anticipate this trend to continue in April, which will impact volume. »

Otherwise, he told Maritime Magazine: « The Prince Rupert gateway is fully opetrational, as cargo continues to move safely and efficiently through the Port. CN’s rail operations also remain fluid, with no disruption of its ability to safely serve customers and ensure critical supplies are getting to market. »

Asked how the port is preparing for an expected surge with carriers reinstating calls at Chinese ports, Mr. Friesen replied: « DP World’s Fairview Terminal has an effective annual capacity of 1.35 million TEUs today, with an ability to accommodate surge volume beyond that. Last summer, for example, the terminal operated at closer to 1.5 million TEUs on an annualized run-rate for several months. »

He indicated that the port in northern British Columbia has run several scenarios assessing the impact of COVID-19 on intermodal volumes – « but it is a very fluid situation and we don’t wish to speculate at this time. »

For the Port of Vancouver, the  especially challenging times are illustrated by such developments as international freight forwarders and logistics firms reporting plunges of as much as 85% in the volume of Chinese goods arriving at Canada’s largest maritime gateway as the pandemic is beginning to disrupt supply chains.
Following a record container throughput of 3.4 million TEUs in 2019, Vancouver saw its cumulative box volume decline by 13.3% to 497,000 TEUs at the end of February. Laden imports were down nearly 20%.

Industry analysts consider the total drop for all of 2020, barring a dramatic recovery in the last quarter, could exceed 20% – such as widely forecast for U.S. ports on the West Coast of North America.

« We could not ask for more from the stakeholders remarkably adjusting to find supply chain solutions, » remarked  Robert Lewis-Manning, President of the Vancouver-based Chamber of Shipping. « Bulk exports for agricultural and other commodities are holding their own. But the container cargo hinges on the market for consumer goods. »

Meanwhile, at the Port of Halifax, spokesman Lane Farguson said that all partners are working hard to maintain supply chain fluidity. « While the Port of Halifax has had no blanked voyages, there has been some decline in both import and export cargo as a result of COVID-19. »

(Photos from Port of Montreal and Prince Rupert)