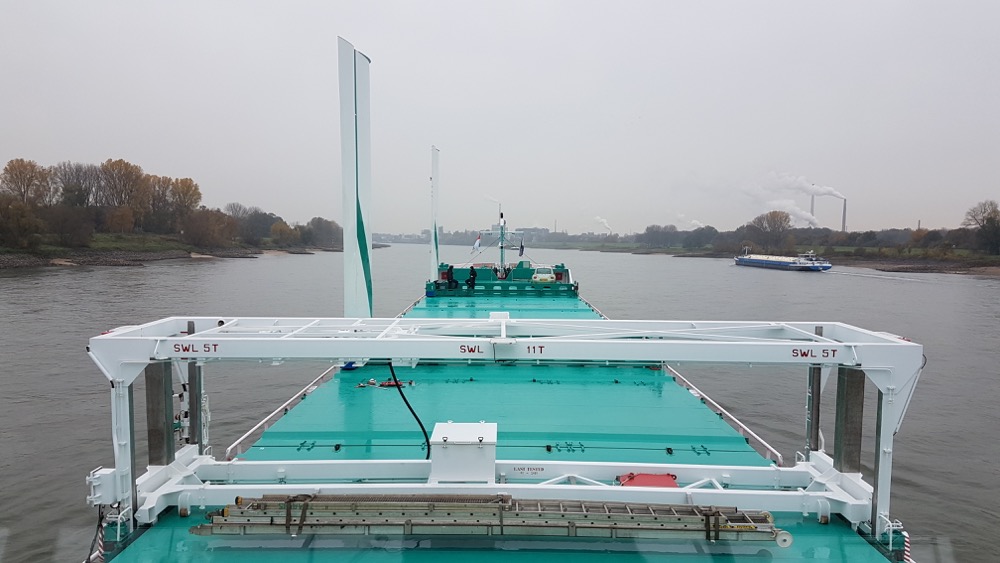 Hardinxveld-Giessendam, The Netherlands – Tharsis Sea-River Shipping has concluded the installation of two retractable wing sails on their 88 m, 2,364 dwt diesel-electric general cargo vessel, M/V Tharsis at the Neptune Shipyard in Hardinxveld-Giessendam, near Rotterdam. The work was undertaken at the same time as the vessel was having its air lubrication system upgraded.

The 3m x 9m TwinFoil units are supplied by Netherlands-based eConowind and the units are both integrated in a specially designed aluminum Flatrack from which the folding TwinFoil’s can be deployed. The TwinFoil is a further innovation for eConowind next to their previously designed VentiFoils. The TwinFoil is a wing with a flap principle similar to those used by aircraft during landing and take-off.

“With this installation operating in both river and North Sea routing with varying winds we are eager to see how the rigs perform, especially with the unique combination of this self-adjusting technology in combination with a modern diesel-electric drive.” says Frank Nieuwenhuis, CEO of eConowind.

Designed and built at the Dutch Shipyard De Kaap in 2012, the M/V Tharsis is a unique vessel of this type. Its innovative diesel-electric propulsion system along with the air lubrication system already reduces the vessels carbon footprint while with a ballast air draft of 6 metres and a minimal sailing draft of 1.65 metres it can go where most other seagoing ships can’t go.

“Tharsis Sea-River Shipping was one of the first companies to install a diesel-electric propulsion train on its general cargo vessel with the aim of fuel and emission reduction back in 2012. After the installation of a hull air lubrication system in 2020, the installation of the Econowind Twinfoil system is a logical next step towards the company’s aim of becoming zero emission.” states Jan Albert Bosma, co-owner of Tharsis Sea-River Shipping

The wind-assist equipment will be carefully monitored and evaluated as part of the WASP (Wind Assisted Ship Propulsion) project, which is funded by the Interreg North Sea European program, part of the European Regional Development Fund (ERDF) and brings together universities and wind-assist technology providers with ship owners to research, trial and validate the operational performance of a selection of wind propulsion solutions.

“As Tharsis Sea-River Shipping joined the WASP project as the last participant we are happy that the Twinfoil system is now installed on board the M/V Tharsis,” adds Bosma, “We are looking forward to playing our part within the WASP project and providing valuable information that will undoubtedly accelerate the adoption of wind assist systems in shipping.”

The WASP (Wind Assisted Ship Propulsion) project, funded by the Interreg North Sea Region programme, part of the European Regional Development Fund (ERDF) to the tune of €5.4 million. The project brings together universities, wind-assist technology providers with ship owners to research, trial and validate the operational performance of a selection of wind propulsion solutions thus enabling wind propulsion technology market penetration and contributing to a greener North Sea transport system through harvesting the region’s abundant wind potential. This fully aligns with the wider programmes’ objective of promoting the development and adoption of products, services and processes to accelerate the greening of the North Sea Region. https://northsearegion.eu/wasp