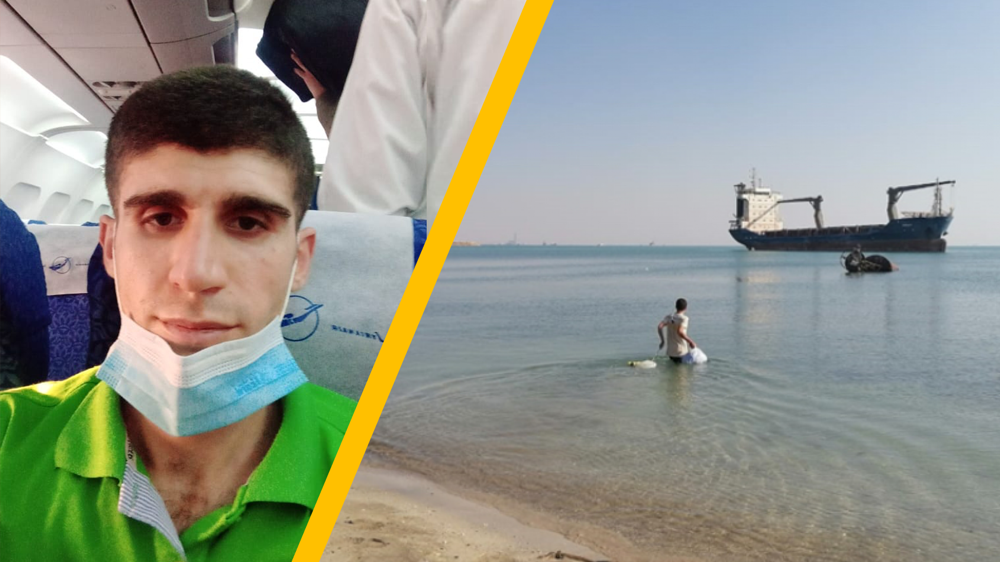 The four-year plight of a sole seafarer trapped on his vessel unable to go home due to political and legal hurdles has been resolved. The International Transport Workers’ Federation (ITF) reports that its local union representative, who had been pleading the case to Egyptian port and immigration officials, was able to arrange a solution and yesterday Seafarer Mohammad Aisha boarded a flight to return home to his family.

Seafarer Mohammad Aisha is free because the ITF offered to have one of its union representatives in Egypt take Mr. Aisha’s place and become the legal guardian of the vessel. Mr. Aisha was the chief officer onboard the Bharani-flagged MV Aman (IMO 9215517) for just two months before the vessel was detained by Egyptian authorities due to expired safety equipment certificates. When the owner abandoned the ship, an Egyptian court designated Mr. Aisha the vessel’s ‘legal guardian’ – preventing him from leaving the Aman until the ship was sold or a replacement guardian found. The vessel had no power and was covered in insects and rodents. Mr. Aisha had to swim ashore to charge his phone, and for food and water.

ITF Arab World and Iranian network coordinator Mohamed Arrachedi said that after months of frustration at inaction from the shipowner, the Bahraini registry, and Egyptian authorities, a breakthrough came last week. The ITF offered to the court to have one its union representatives in Egypt take Mr. Aisha’s place and become the legal guardian of the vessel.

“When we put forward one of our ITF contacts to take Mohammad Aisha’s place it was accepted by the court and we were then able to advance the necessary immigration processes and arrange the Covid PCR tests to start to get him home.”

“Mohammad has lost four years of his life.”

“This has been one of the most frustrating abandonment cases I have worked on, because the situation has been so desperate for Mohammad for so long. It has to be said that the suffering caused to Mohammad could have been perfectly avoided if the shipowner and the other parties with obligations to him and the ship did the right thing from the start.”

“So much has changed in the last four years. Mohamed’s home in Syria could be unrecognisable. Some of his family died years ago. The delays mean he will never see his mother again, and that is terribly sad.”

Arrachedi said that Mr. Aisha cannot quite believe that his nightmare trapped aboard the Aman has finally come to an end.

“He is naturally overjoyed, but he is very tired. There have been so many false starts to get him home. Until his feet were on that airplane – we took nothing for granted,” said Arrachedi.

The seafarer told the BBC how he felt minutes before his plane was due to take off: “How do I feel? Like I finally got out of prison. I’m finally going to be rejoined with my family. I’m going to see them again. »

Undeterred by his four years aboard the Aman, Mr. Arrachedi said Mohammad still wants a career in seafaring.

“We wish him all the love in the world to rebuild his life,” said the coordinator.

However, Mr. Aisha’s case is not yet over, as the global union federation fights to recover the seafarer’s wages – a battle often required when shipowners abandon their vessels.

“It is absolutely unacceptable that it is always the seafarers who are made to pay the very high costs of abandonment. Abandonment is the cancer of the maritime industry and it needs to be eradicated,” said Arrachedi.

‘Legal guardianship’ system must be reformed

Mr. Arrachedi said the case of Mohammad Aisha has put an important spotlight on Egypt’s problematic system of ‘legal guardianship’ in cases of seafarer abandonment.

“The appointment of seafarers as legal guardians is creating huge difficulties and suffering for seafarers.”

Mr. Aisha’s case is similar that of Vehbi Kara, a Turkish master who was trapped aboard a ship in the Suez Canal for months when an Egyptian court made him legal guardian of the abandoned MV Kenan Mete (IMO 8701935). ITF advocacy saw Captain Kara released to a nearby hotel, but he remains unable to leave Egypt.