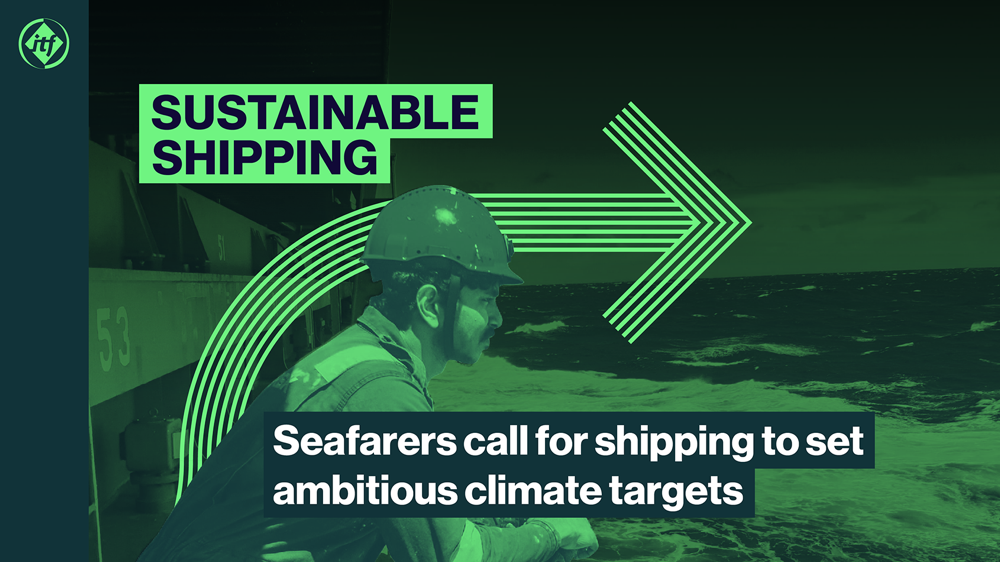 There are currently more than 50,000 cargo ships on the world’s oceans, the majority of which run on low-grade, heavy ‘bunker’ fuel. Together, the ships emit as much greenhouse gas into the atmosphere as entire countries, such as industrial powerhouses Germany and Japan.

“People who work at sea witness the impacts of climate change every day and are extremely concerned that their industry is not acting quickly enough,” said Stephen Cotton, the ITF’s General Secretary. “Huge changes are needed swiftly to switch the shipping industry away from fossil fuels. Seafarers have the passion, knowledge and ideas to help move the industry to a carbon-free future.

“The decisions made by leaders over the coming weeks at COP and elsewhere will be crucial to preventing irreversible climate change. As working people, we deserve a planet that is safe to live on.”

The ITF’s sustainable shipping position paper released today, The green horizon we see beyond the big blue, set out eight ‘fundamental principles for a just transition’ to make sure the decarbonisation of the industry includes workers’ voices, as the industry tests alternative fuels, redesigns skills and career pathways, and shifts employment from fossil fuels to alternative fuel bunkering systems.

“Seafarers want to be part of the solution,” said David Heindel, ITF Seafarers’ Section chair and the Federation’s Sustainable Shipping Working Group chair. “We want to be proud of the action taken by our industry. We want to lead the transition.”

But switching from carbon heavy bunker fuel to new energy sources such as hydrogen or ammonia has the potential for danger for workers, the ITF’s paper points out. Safety must be carefully thought through. Seafarers must receive adequate training. Changes such as the introduction of new technology must not be used as an excuse to reduce crewing numbers on ships or to attack workers’ jobs or conditions. In fact, it says, the transition could lead to more employment, and is especially an opportunity to encourage more women and young people to take up work at sea.

« Seafarers must be at the table from the outset, if we are to deliver sustainable shipping for future generations,” said Heindel. “The industry would be well-advised to draw on workers’ experience and expertise. That way, plans for achieving zero-carbon emissions can happen quickly, safely and fairly.”

Ports, the ITF warns, will need major investment to replace diesel tanks and pipeline infrastructure with the fuel systems of the future. Upgrades could cost hundreds of billions of dollars. Transitioning shipping to zero-carbon will be a challenge, particularly in the global south. The ITF position paper calls on international regulators, governments and the shipping industry itself to look at ways the transition can be funded fairly, particularly for investments needed in the world’s poorest countries.