Seaway traffic down under challenging conditions 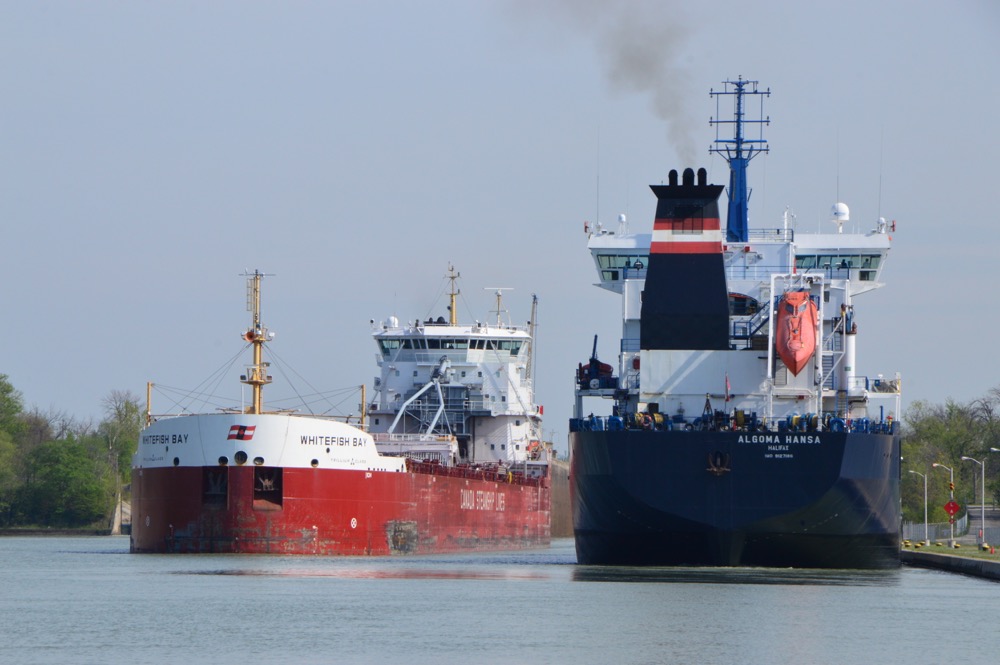 As the Great Lakes-St. Lawrence Seaway heads into the final weeks of the 2019 shipping season, ports along the Great Lakes are reporting the wins and challenges they’re facing at the end of the year.Overall cargo on the St. Lawrence Seaway totaled 34 million metric tons at the end of November; down 6 per cent from 2018. (Figures represent volumes from March 22 through November 30.)

« Tonnage results on the Seaway reflect the more challenging conditions encountered this year as compared to 2018, in which Seaway tonnage was at a 10-year high, » said Terence Bowles, President and CEO of The St. Lawrence Seaway Management Corporation. « Trade tensions, difficult navigational conditions due to very high-water flows within the St. Lawrence River, combined with adverse weather conditions impacting grain harvests, have served to restrain total cargo volumes. Looking ahead, we see carriers working hard to wrap up the year and clear some backlogs of freight, especially western grain, which underscores the importance of the final weeks of the navigation season. »

For the third consecutive year, the Port of Toronto moved more than 2 million metric tons of bulk and general cargo products through the Port, representing another strong year in marine imports. By the end of 2019, more than 190 ships will have visited the Port of Toronto, bringing sugar, road salt, cement, aggregate and steel directly into the heart of downtown Toronto.

« From the cement and steel used to build and enhance infrastructure across the Greater Toronto Area to the sugar used to support the food and beverage industry, the goods delivered through the Port of Toronto are part of an important supply chain that services many of the city’s key sectors, » says Geoffrey Wilson, CEO of Ports Toronto. « In 2020 and beyond, the Port will continue to provide Canadian and international businesses with a convenient, cost-effective and environmentally-responsible way of bringing goods into Canada’s largest city. »

Harbour services at the Port of Johnstown are up over 50 per cent from 2018 thanks in large part to a wind energy project being transferred through the Port, as well as an increase in salt. Through November, the Port has already seen the same amount of salt cargo as 2018, 520,000 metric tons, with four additional vessels due to arrive in December. Soybean exports are well below 2018 numbers as brokers continue to be challenged by the global markets and pricing

Cargo volumes transiting the Port of Hamilton in 2019 have returned to levels closer to the Port’s five-year average and are expected to achieve approximately 10 million metric tons by season’s end. With the close of the Welland Canal section of the Seaway extended to January 8, 2020, the Port expects to be able to fit in a few extra late-season shipments of salt to help boost its final results.

On the other side of Lake Ontario, the Port of Oshawa volumes are trending 13 per cent higher compared to the same time last year, seeing increases in cement, asphalt, salt and construction materials. Oshawa added new capacity in 2019 with a $6 million grain terminal, which will serve farmers across the Durham region. The new terminal, operated by Sollio Agriculture, shipped its first load of grain in November.

The Hamilton Oshawa Port Authority saw several exciting milestones during the 2019 shipping season including the amalgamation of Hamilton’s and Oshawa’s ports, announced by the Minister of Transport in June, and its recent rebrand as HOPA Ports. HOPA Ports has been busy investing in high-quality infrastructure, including a $16 million agri-food expansion at Pier 10 in Hamilton, and the ongoing $35.5 million Westport Modernization Project, both supported by the National Trade Corridors Fund.

« The amalgamation has set us up to expand and embrace a new multimodal reality as bookends to the Greater Toronto Hamilton Area, » said HOPA Ports CEO, Ian Hamilton. « We look forward to supporting transportation-intensive businesses in Ontario by continuing to make strategic infrastructure investments on Ontario’s working waterfronts.
For their part, U.S. Great Lakes ports report increases in road salt shipments, petroleum products and general cargo in November.

Bruce Burrows, President of the Chamber of Marine Commerce, said: « Despite the overall Seaway decrease, it’s great to see so many U.S. ports reaching their yearly goals with a few weeks remaining in the shipping season and exceeding their 2018 cargo totals. We’re optimistic this momentum will continue. Cities and manufacturing companies rely on this important Great Lakes-Seaway trade corridor to stockpile road salt for de-icing roads, deliver crucial raw materials for plant production, and export grain and other products right up to the end of December. »

The Port of Duluth-Superior finished the month of November slightly ahead of the five-season average and is on pace to top 35 million short tons for the third consecutive season despite a decline in coal tonnage. Grain movement through the Port was especially strong, topping the previous month’s haul and eclipsing the November 2018 tonnage by nearly 60 percent. Photo Paul Beesley