Seaway cargo up 5% at end-July from a year ago 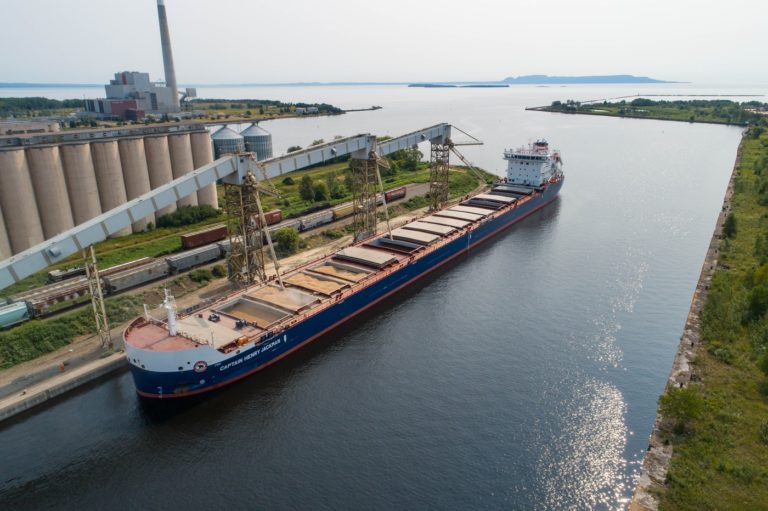 Boosted by strong shipments of cement, steel and steel-making materials, overall cargo volumes on the St. Lawrence Seaway through to the end of July reached 16.7 million metric tons, 5 per cent ahead of 2020 totals.

Year-to-date iron ore shipments via the Seaway reached 3.5 million metric tons from March 22 through July, a 23 per cent increase over the same period in 2020. Canadian-flag ships are transporting iron ore from Quebec mines via the Seaway to supply domestic steel manufacturing in Canada. Minnesota Iron Range pellets are also being transported from the Port of Duluth-Superior and Silver Bay to Quebec ports and then loaded onto ocean carriers for export overseas.

Meanwhile, cement shipments through the Seaway topped 1 million metric tons through July, up 25 per cent from last year, with cargo moving from manufacturing plants in Ontario and Quebec to cities throughout those provinces and across the border to Cleveland, Buffalo and Toledo.

General cargo shipments totaled 1.6 million metric tons — up 52% over the same period in 2020.  This major increase continues to be driven by steel imports from Europe and other countries heading to Canadian and U.S. cities throughout the region, to help support pent-up demand for manufactured goods and construction activity.

The strong overall cargo performance comes despite a decline (-12 per cent) in Canadian and U.S. grain shipments. The 2020 carryover of grain has largely been shipped already and new Canadian Prairies and American mid-west harvests are expected to be smaller following hot, dry weather conditions.

“Overall, the St. Lawrence Seaway’s cargo performance reflects how the navigation system is supporting the resurgence of cement and steel manufacturing both in North America and globally.  It shows the diversity of the Great Lakes-Seaway system and the breadth of commodity segments and markets that it serves,” says Terence Bowles, President and CEO of the St. Lawrence Seaway Management Corporation.

As of July 31, the ports of Hamilton and Oshawa (HOPA) saw over 4.8 million metric tons of cargo combined this season. The strength in the amount of bulk and breakbulk cargos feeding construction projects around the Greater Toronto-Hamilton Area has continued; including finished steel, cement, sand, slag, stone and other aggregates.

In July, over 1.1 million metric tons came through the Port of Hamilton alone. Year-to-date grain and fertilizer cargoes are up 13 and 31 per cent, respectively, compared to the same time last year. General/project cargo tonnages are also up significantly, including containers from the inaugural HCT feeder service sailing, as well as specialized equipment and industrial supplies through FMT’s Hamilton terminal.

Port Windsor continues to see economic turnaround from COVID-19 through July. Truck ferry transport of oversized and dangerous goods (such as flammable material or chemicals like acids and alkaloids) to the United States are up 54 per cent, roughly 200 sailings. These goods are transported as lake traffic to the U.S. rather than via roadways as they are not permitted to cross the Ambassador Bridge connecting Windsor to Detroit, Michigan.

Demand for aggregate shipments remain strong for construction materials due to the Gordie Howe International Bridge and other major road construction projects. General cargo (steel) is up 250 per cent over 2020, reflecting the renewed strength of the manufacturing industry. Grain has flattened out mid-summer awaiting new crops this fall. Through July, the Port has experienced a 40 per cent increase in foreign ship tonnage and more than 300 per cent increase in U.S. ship tonnage.

The Port of Thunder Bay and Algoma Central Corporation celebrated Algoma’s newest Equinox Class gearless dry-bulk carrier, the Captain Henry Jackman, which officially joined the fleet with its first cargo of grain loaded in Thunder Bay (see photo). The Captain Henry Jackman is the most efficient vessel in Algoma’s domestic fleet, producing 35% less carbon emissions per tonne-kilometre than the vessel its replacing. With its new, improved design, the ship set a new record for grain shipments in Thunder Bay (31,100 metric tons) on her very first voyage.

Shipments through Thunder Bay are currently at 5-year-average levels, including grain shipments, down from the strong performance in 2020. Year-to-date grain shipments are just under 3.5 million metric tons as of the end of July; 4 per cent higher than average, but 9 per cent lower than last year’s peak volumes.

The Port’s Keefer Terminal, on track for a banner year, is expected to reach a 25-year high at year’s end. In addition to dimensional loads, such as heavy-lift engines and pre-fabricated housing modules, the terminal is handling record volumes of steel products destined for Western Canada. Structural steel from Luxembourg and steel rail from Central Europe are serving the general construction and rail construction markets on the prairies.