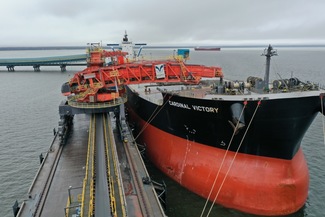 In 2019, 481 ships anchored in Sept-Îles Bay-53 more than in 2018. The multi-user dock accommodated 45 vessels for a total of 7,776,000 tonnes handled, a 40% increase over 2018. Québec Iron Ore began shipping last year, and a new user, Tacora Resources Inc., brought in another 917,000 tonnes. IOC Rio Tinto also carried out split cargoes on vessels chartered by Tacora. Another major milestone- 10,000,000 tonnes handled at the multi-user dock-was reached in August.

In June the Port welcomed the Honourable Marc Garneau, Minister of Transport, and Jonatan Julien, Minister of Energy and Natural Resources and Minister Responsible for the Côte-Nord Region, to a traditional ground-breaking ceremony in confirmation of the equal participation by the two levels of government to the cost of the Pointe-aux-Basques terminal modernization project, for a total of more than $13.3 million, or two-thirds of an estimated investment of $20 million.

The year 2019 also marked the 20th anniversary of the Port Authority’s financial autonomy and local ownership. Two open house events were held for the public.

It was also a record-breaking year for cruise ships, with the Port welcoming 18,655 passengers and crew members. The season included seven planned calls, including the grand Queen Mary 2 on two occasions, and one unplanned call by the Serenade of the Seas seeking safe harbour from Hurricane Dorian. The ship came in to port with less than 24 hours’ notice and stayed for 34 hours, to the delight of local residents and retailers.

« We are glad that we found such fitting ways to celebrate the Port’s first 20 years of autonomy and local ownership with our community, our people, our partners, and our users, who are the reason for everything we do. There has been sustained growth since the multi-user dock was commissioned, so the next 20 years look very bright for the Port Authority of Sept-Îles and the regional economy as a whole, » said Carol Soucy, Chair of the Port of Sept-Îles Board of Directors, and Pierre D. Gagnon, Port of Sept-Îles President and Chief Executive Officer. (photos Port of Sept-Îles) 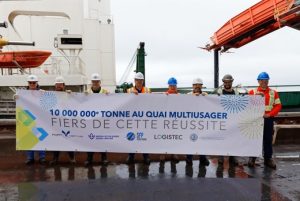