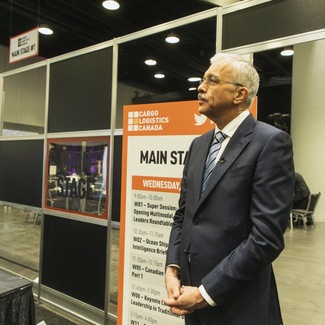 Vancouver -Don Krusel, the former President and CEO of the Prince Rupert Port Authority, views the proposed Laurentia container terminal project at the Port of Québec through the same innovation lens that transformed the Port of Prince Rupert into a major North American gateway on Canada’s west coast. « I can’t think of another such exciting project in the logistics industry that has come around in this industry since Prince Rupert, » said Mr. Krusel in his keynote speech at Cargo Logistics Canada’s 2020 Expo in Vancouver February 5 and 6.

Referring to his Prince Rupert container terminal success story, Mr. Krusel said « most people would have said that facility was not an innovative approach to the supply chain system – a lot of other words were used, like ‘silly’. »

Following its launch as a partnership with CN Rail in 2007, Prince Rupert quickly became one of North America’s fastest growing container ports. Ten years later it had expanded its capacity to 1.35 million TEU and to 1.8 million TEU in 2018. Last year the port announced it will quadruple its current capacity by 2022.

« Today the industry, internationally, refers to the Prince Rupert model as an innovative approach to adding capacity and adding innovation to the supply chain, » said Mr. Krusel. « Likewise, I think in ten years from now, people are going to talk about Québec City and the Port of Québec terminal model as a reason why we, as a country, are gaining so much success. Canada is gaining market share on the west coast and losing market share on the east Coast. The Québec container terminal model is going to change that. »

James Pettifer, Finance Manager, Hutchison Ports European Division, said his company wanted « to shift the competitive advantage from the west coast due to modal changes in the global shipping industry and changing trends in manufacturing from China to South East Asia, » noting that the east coast is strategically located to access US markets.

« Québec is positioned as a modern ship-to-rail player to serve the US Midwest and Ontario and with  competitive transit time and supply chain costs both into New York/New Jersey and other east coast North American ports. With a fully intermodal 16-meter deep water port, all year access, and capability of handling 13,000 TEU vessels, Québec City will rival other east coast ports capable of handling big ships, » said Mr.  Pettifer. « Total terminal cost will be $775-million (CAD), » he said.

Dan Bresolin, Vice President, Intermodal CN, added:  » What we’re seeing is a fundamental shift in the origin of goods happening rapidly from China into some of the ASEAN countries, and as you go further south into this region what that does is plays for better connectivity into east coast ports. » Mr.  Bresolin noted that a major shift between 2015 and 2019 saw about 1-million TEUs moving from west to east coast ports. (photo Informa)