Port of Vancouver reeling from ‘storm of the century’ 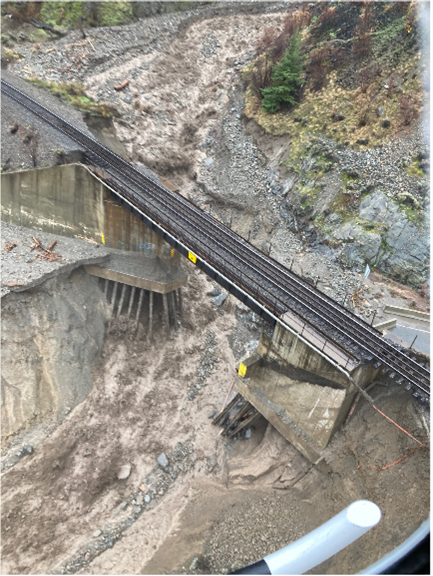 Canada’s largest port is hoping that normal operations can be restored this weekend after record-breaking torrential rains last weekend on Vancouver Island caused severe flooding and mudslides that submerged the Trans-Canada Highway and the tracks of the Canadian Pacific and CN railways.

There is no certainty when the vital rail services will actually resume, despite some progress already made in clearing multiple sites. All main roads to the Metro Vancouver area have been closed – although there were signs traffic could resume this weekend.

While declaring yesterday a state of emergency, British Columbia Premier John Horgan said: “These are extraordinary events not measured, not contemplated before.”

In effect, thousands of residents have had to evacuate their homes, at least hundreds of motorists have been isolated, and thousands of animals have perished during what has been called the “storm of the century” in British Columbia. Thus far, however, only one human fatality has been reported.

For the Port of Vancouver, which handled some 145.5 million tonnes of cargo in 2020, including record grain throughput of 35 million tonnes (a 24% spike from 2019), the weather-caused logistical nightmare has broken the momentum of steady post-pandemic recovery.

Statistics for the first six months of 2021 showed total cumulative traffic up 6.5% at 76.4 million tonnes. Grain, specialty crops and feed were up 14%. And container volume was up a significant 24% at nearly two million TEUs.

But it is estimated that more than 1,500 rail cars carrying grain were idled in the Vancouver region on Wednesday compared with 947 units on Tuesday.

Agricultural exporters as well as retailers and mining companies are scrambling to find alternative ports.

In an operational update Wednesday, the Vancouver Fraser Port Authority (VFPA) indicated: “CN and CP main rail corridors are not currently operational between Vancouver and Kamloops due to washouts and landslides. Vessel delays and heightened anchorage demand due to disrupted terminal operations are expected.”

Although the port’s four main container terminals are still operating, the dwell times for containers had been moving upwards since mid-October amidst the global supply chain crisis that has notably struck U.S. West Coast ports. Today, these turnaround dwell times, or how long imported containers remain on dock before being shipped out, appear to be approaching five days as opposed to three or fewer days – the desirable standard.

In this regard, the VFPA stated: “We are working closely with our container terminal operators, railways and all levels of government to understand the impacts of these delays on terminal operations and to develop a recovery plan.” (Photo B.C. Ministry of Transportation)