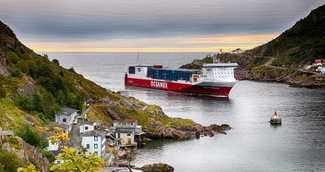 The economic fallout of the pandemic may force a vital carrier of food and medicine to Newfoundland and Labrador to tie up its fleet of ships and stop delivering as much as half of the island’s food supply, the CBC reported. Oceanex Inc. – which runs weekly trips from Montreal and Halifax to St. John’s – says it is losing millions a week due to a drop in volumes caused by the COVID-19 pandemic. It is asking the federal government to offset its losses so it can keep running supplies to St. John’s.

« We just can’t continue, » said Sid Hynes, the company’s executive chairman. « It’s costing us $5 million a week to operate and we are about $2 million short. »

Hynes said the company almost certainly will have to cancel one of its weekly trips from Montreal, tie up that ship and lay people off.

« It’s getting progressively worse. It’s not getting better, » Mr. Hynes said. « This past week was worse than the previous week. »

If Oceanex shuts down, it would create an immediate food security and public safety crisis in the province.

Oceanex said it delivers 50 per cent of all freight to Newfoundland – and 75 per cent of all goods to the more heavily populated St. John’s area on the northeast Avalon Peninsula.

It’s the major supplier for Costco, Walmart and other major grocery stores in Newfoundland and Labrador and it delivers a significant amount of medicine and medical supplies to the province.

Newfoundland and Labrador Premier Dwight Ball has warned that the island has just a five-day supply of food and that losing Oceanex’s services could lead to critical shortages.

The CBC report indicated that Oceanex was struggling financially before the pandemic. It carries significant debt and most of its costs – such as fuel – can’t be offset by government pandemic aid programs such as the wage subsidy. (photo Oceanex)