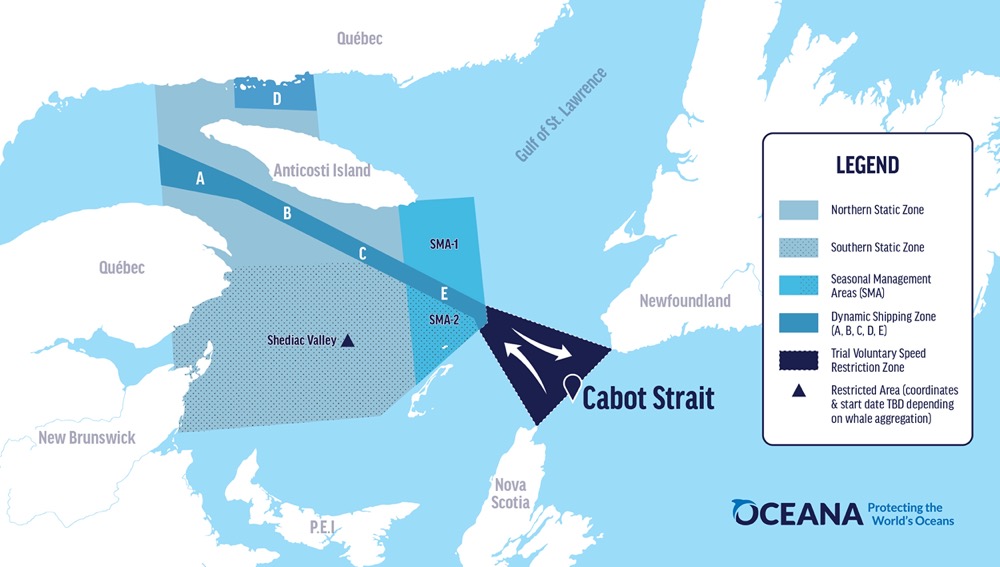 OTTAWA – During a week in May, 72 percent of vessels were observed exceeding a voluntary 10 knot slowdown through the Cabot Strait, a key passage for endangered North Atlantic right whales as they migrate into the Gulf of St. Lawrence in search of food. The highest observed speed – 21.1 knots – was a Canadian cargo ship.

Oceana Canada used data from Global Fishing Watch collected between May 19 and 25, 2020, part of ongoing analysis of vessel speeds in a voluntary slowdown zone in the Cabot Strait. Part of the largest international advocacy group dedicated to ocean conservation, Oceana Canada was established in 2015.

North Atlantic right whales are one of the world’s most endangered whales, with only around 400 left. Studies have found that slowing ship speeds to 10 knots or less in areas where these whales may be encountered can reduce the lethality of a collision by 86 percent.

Transport Canada uses several measures to try to protect right whales from ship strikes, including a combination of mandatory season-long and temporary slowdown zones. In February, Transport Canada announced a voluntary speed limit in the Cabot Strait of 10 knots for vessels that are 13 metres and longer that would take effect from April 28 to June 15 and again from October 1 to November 15, 2020.

Oceana Canada has been sharing weekly reports of the exceptionally high level of non-compliance with the voluntary measures with Transport Canada, urging that they be made mandatory.

“In an industry where speed often provides a competitive advantage, we are concerned that having a voluntary slowdown creates a disincentive for vessel operators to comply with the speed restriction and an unfair edge to those who don’t – some of whom are travelling at almost double the recommended speed,” said Kim Elmslie, Oceana Canada campaign director.

“The high level of non-compliance, and lack of consequence, poses a real threat for individual right whales and the survival of the species as a whole.”

Research has also shown that pregnant females and mothers with calves may be more susceptible to ship strikes, as they spend more time resting at the surface. One newborn calf has already been struck this winter in U.S. waters and is presumed to be dead.

At least 10 right whales were killed last year and only seven calves were born over the winter. There were 22 deaths in Canadian waters between 2017 and 2019.

“We must do everything we can to protect all right whales and prevent the extinction of this species”, said Kim Elmslie. “Vessels are not complying with the voluntary slowdown in the Cabot Strait; therefore, it must be made mandatory – before it is too late. Each death pushes right whales closer to extinction.”

Oceana Canada’s analysis used data from Global Fishing Watch, a tool developed by Oceana in partnership with Google and Skytruth, which uses machine learning to interpret data from various ship tracking sources, like the Automatic Identification System (AIS), to monitor ship speed and positions in North Atlantic right whale conservation areas. The mapping platform has been supported by the Government of Canada. (Map illustration from Oceana).