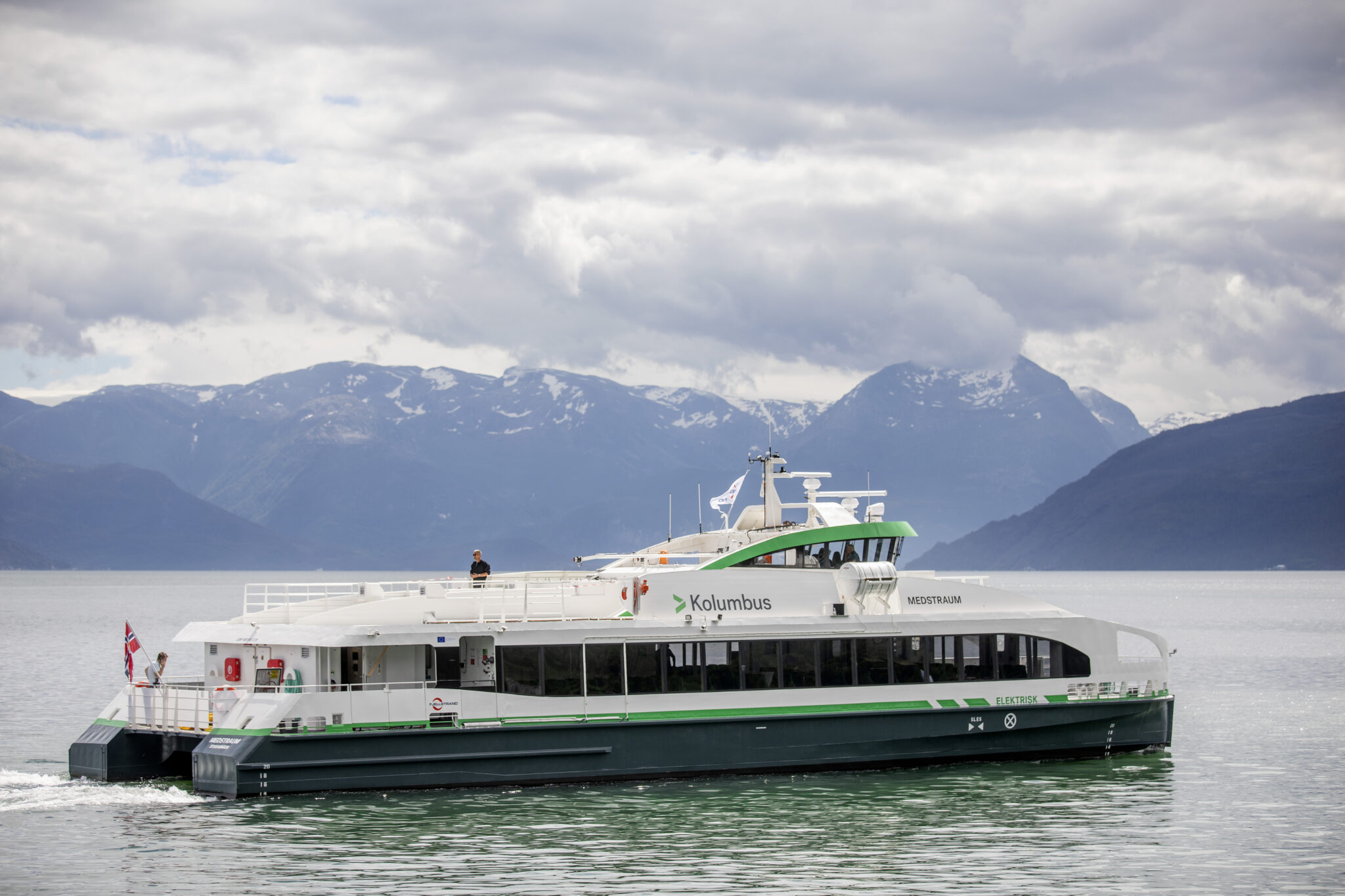 MS Medstraum, the world’s first fully electric and zero-emission fast ferry, classed as a high-speed craft, has embarked on the journey from Fjellstrand shipyard to its new home port, Stavanger.

The vessel has been built using unique modular manufacturing methods at the Norwegian shipyard, Fjellstrand. Modularisation helps cut both production costs and engineering costs and will contribute to making electric-powered high-speed vessels competitive in terms of both cost and the environment. Whilst traditional fast ferries running on fossil fuels are known for being highly polluting, Medstraum will vastly improve the carbon footprint of its owners, Kolumbus, a public transport company.

– We are very happy to finally get this flagship delivered. Kolumbus aims to be at the forefront of adopting new and environmentally technology, Project Manager at Kolumbus, Mikal Dahle says. The company currently has ten fast ferries, some regular ferries, and 450 buses in operation.

– Medstraum will cut our emissions by 1500 tonnes a year, despite operating on our least energy-demanding route. That’s the equivalent of 60 buses, Dahle says. In late summer the vessel will welcome passengers for scheduled operations between Stavanger and Homersåk.

– It’s been challenging building this ship, as it’s never been done before, but we’ve learned a lot. Fast ferries require a lot of energy so we needed to make Medstraum lighter and a lot more efficient than traditional fast ferries. We’re very happy and proud to have accomplished that. It is revolutionary that a vessel of this size can operate at 23 knots for an entire hour by electricity alone, says  Edmund Tolo,  head of research and development, at Fjellstrand AS.

From one groundbreaker to another

In 2015, the world’s first fully-electric ferry, Ampere, was built at the Fjellstrand shipyard in Hardanger, Norway. That marked the start of an electric revolution on Norwegian ferries. Now, only seven years later, there are approximately 70 emission-free ferries operating in Norway.

– Medstraum is already stirring great interest internationally. The maritime industry across the world is now looking at what we achieve in our maritime cluster. This could really be the start of a new adventure for our industry.  Not only have the project partners developed and demonstrated a new and emission-free propulsion system that can maintain higher speeds than before, we have also adopted completely new modular design- and construction methods that will revolutionise the way we build boats in the future, says Hege Økland, CEO of Maritime CleanTech, the cluster organisation who initiated and established the EU-funded TrAM-project, which resulted in Medstraum. The Norwegian industry partners were inspired by how cars, trains, and aircraft are built when constructing Medstraum.

The modular way of thinking is absolutely central to the project. This means that ships can be purpose-built by putting together finished modules, which can be built in different places. This will save both time and money in the design and construction phase. It will also make it easier to get more boats into the market faster. This way, we can reach future emission requirements faster, by replacing fossil fast ferries with electric ones, like Medstraum, Økland says.