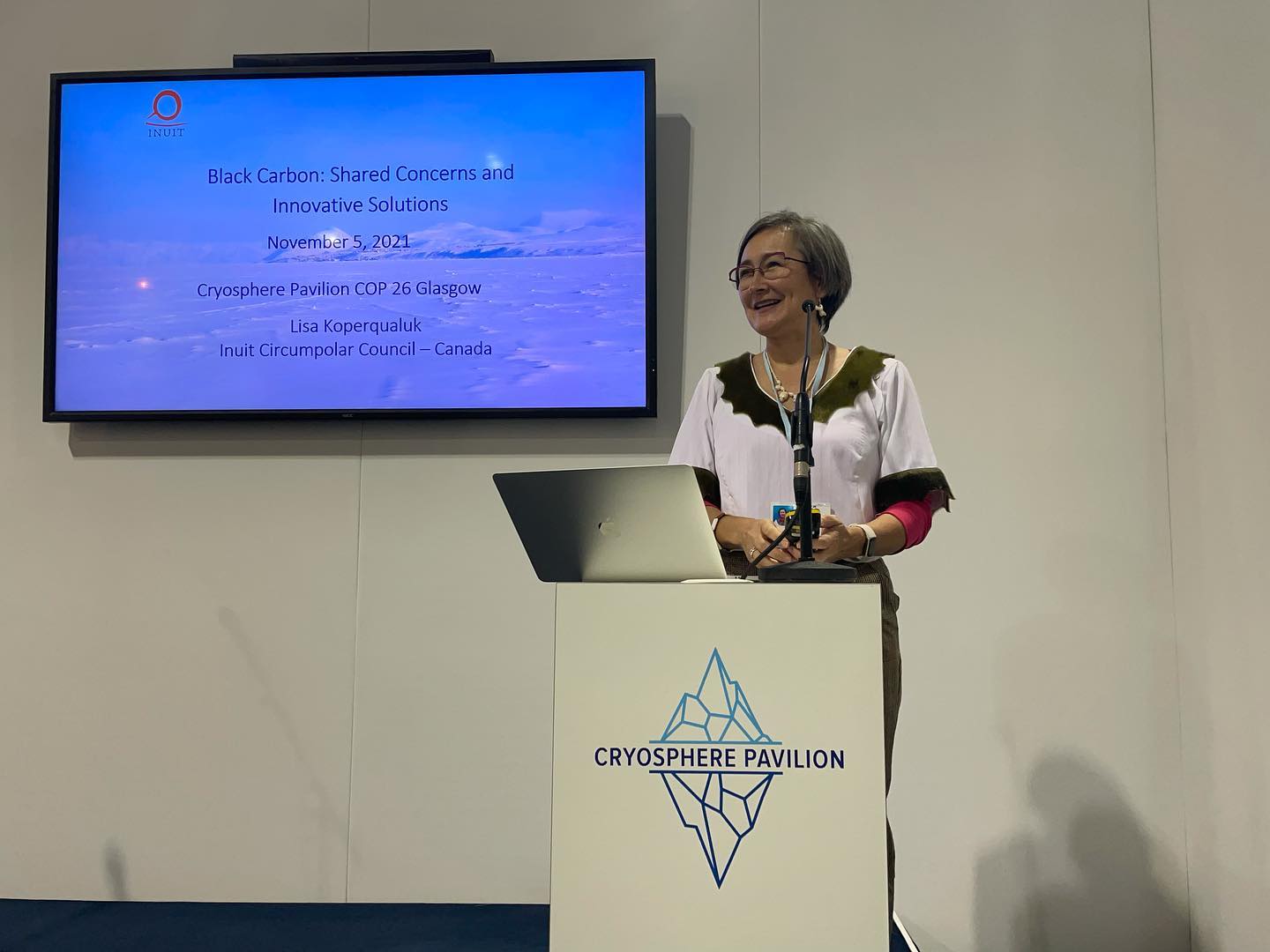 According to a report in Nunatsiaq News, Lisa Koperqualuk, Vice-President of the Inuit Circumpolar Council (ICC) took to the stage during the COP26 climate summit, which was concluding today, to speak about an issue particularly affecting the Canadian Arctic communities: black carbon emitted by ships burning heavy fuel oil.

“We can take days and days to actually sit down together and talk about it, that’s how important [black carbon discussion] is,” Koperqualuk said in her speech last week.

Black carbon increases the temperature of the air surrounding it, and when it settles on ice, it makes the ice darker and less reflective, which in turn makes it melt faster.

Predictions that Arctic shipping could increase suggest this problem could grow.

Ms. Koperqualuk said she wants stronger measures in place to ban the use of heavy fuel oils used by ships going through the Arctic, Nunatsiaq News reported.

Currently, the International Maritime Organization has approved a phased-in ban on the use of heavy fuel oil in the Arctic that would fully come into place in 2029.

Both the Nunavut and federal governments have opposed an immediate ban on the use of heavy fuel oil in Arctic waters, saying that such a ban would increase the cost of living in remote communities that depend on goods being delivered by sealift. One study concluded that the average Nunavut household would pay an additional $1,400 a year if the fuel were banned.

But the ICC and conservation groups have argued that a ban that’s phased in by 2029 is too weak.

In an email to Nunatsiaq News, Ms. Koperqualuk said the cost of transitioning to cleaner shipping fuels must not be put on communities. A transition fund for Arctic shipping established by the federal government is the best solution, she said, adding that investing $15 million over three years should be enough to offset any increased costs.

During a COP26 event that focused on black carbon emissions in the Arctic, Ms. Koperqualuk described these challenges and spoke of the need to include Inuit interests in decision-making for shipping decisions in the Arctic. “It can impact our culture and our language.”

The Inuit leader said her organization made another step forward in its advocacy efforts last week, when the ICC became the first Indigenous organization to receive consultatory status with the IMO. This development will help the ICC be more involved in the decision-making for the shipping in the Inuit homeland. “We can move forward in engaging with the IMO and have our voice heard.” (Photo Inuit Circumpolar Council)