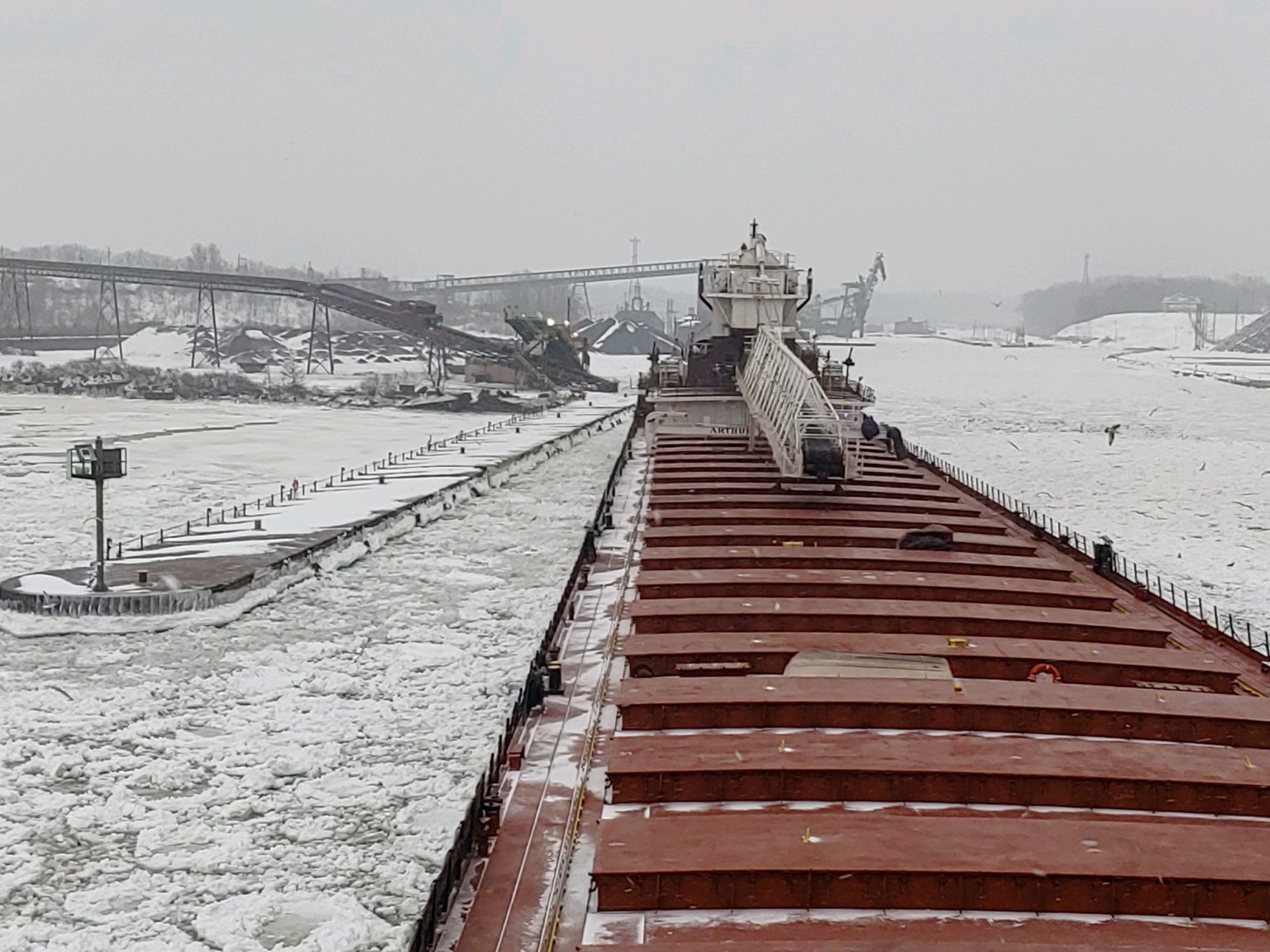 Cleveland – Despite a relatively mild and delayed onset of winter in the Great Lakes, U.S.-flag “lakers” were hampered by a lack of Coast Guard icebreaking assets, reported the Great Lakes Maritime Task Force. A total of 750,000 tons of carrying capacity for iron ore, coal and cement were delayed. 20 voyages were delayed for a total of 325 hours.

He continued, “The men and women of the U.S. Coast Guard do the best they can with the resources they are provided. Unfortunately, they do not have enough icebreakers to keep the system operating efficiently.” Budget reconciliation legislation now being considered in the U.S. Senate would provide the Coast Guard with funding for an additional Great Lakes icebreaker.

Even though the M/V American Century cleared the regulatory check-in point in time to meet the scheduled closing of the Army Corps Locks in Sault Ste. Marie, MI (Soo Locks), it became beset in the St. Mary’s River. Coast Guard icebreakers were not able to free the vessel in time for its planned transit through the Soo Locks, which connect Lake Superior to Lake Huron and beyond.

This delayed the downbound lockage’s of the last vessels leaving Lake Superior, including the Coast Guard Cutter Biscayne Bay. Since the vessel normally stationed in Duluth, Minnesota, the Coast Guard Cutter Alder, is on the East Coast for an overhaul, there are no icebreakers on Lake Superior during the lock closure. The ice induced vessel delays forced the Army Corps of Engineers to begin lock dewatering operations a day later than planned.

Typically, the icebreaking season begins on December 15th each year; however, this year Operation Taconite, which marks the official beginning of icebreaking operations in the Northern Great Lakes did not begin until December 29th. From December 15th until January 15th, the scheduled closure date of the Soo Locks, the U.S. Coast Guard had four of its nine Great Lakes icebreakers in scheduled overhaul, scheduled maintenance, or unscheduled maintenance periods.

At one point in January, five of its eight icebreakers operating on the Great Lakes were simultaneously unavailable due to mechanical failures. A total of 68 icebreaking cutter days were lost due to equipment fires or engine breakdowns.

John Clemons, Great Lakes Maritime Task Force’s Vice President and with American Maritime Officers, AFL-CIO, stated, “The lives of the professional women and men sailing aboard lakers, the safety of the vessels and the protection of the environment depend on adequate Coast Guard icebreakers. In recent years, vessels have been sliced open, forced aground or collided with each other because of inadequate icebreaking resources.”

In fact, one Canadian laker was almost forced aground in the Straits of Mackinac by ice this year. The closest Coast Guard icebreaker was over 12 hours away. Fortunately, the vessel was able to free itself after struggling for several tense hours.

Even though the Soo Locks officially closed on January 15th, as of January 27th, the last U.S.-flag laker is just now arriving to its winter layup birth. Vessel delays were experienced in ports and in connecting rivers and waterways. In addition to a lack of operational vessels, the Coast Guard is hamstrung by metrics it uses to allocate resources and determine mission performance standards.

“The Port of Duluth-Superior is the Great Lakes’ top port by tonnage and one of the nation’s top twenty, but the Coast Guard doesn’t consider its waterways as ‘Tier I’ for icebreaking purposes. This is troubling given that Minnesota’s docks along the western edge of Lake Superior provide the iron ore to produce 80 percent of the nation’s first-pour steel. The Head of the Lakes is a vital link in North America’s domestic steel production supply chain,” said Deb DeLuca, executive director, Duluth Seaway Port Authority.

Lakers need to move cargo in the winter to ensure that stockpiles are large enough to sustain the regions steel mills, power plants and industrial facilities to survive the closure of the Soo Locks from January 15th to March 25th. During the closure period, lakers need to make it to their winter homes for maintenance. A few vessels will continue to operate in Lakes Huron, Michigan, and Erie. They primarily move road salt and petroleum products during the lock closure period.

Eric Peace, the Lake Carriers’ Associations’ Vice President and an experienced icebreaking sailor noted, “Adequate icebreaking not only supports the Great Lakes Navigation System, but it also prevents flooding. Last February, we saw extensive flooding because of an ice dam in the St. Clair River. At the time, the lone “heavy” icebreaker operated by the Coast Guard was not available because it was undergoing repairs. We need to build an additional Great Lakes icebreaker and pass the Great Lakes Winter Commerce Act. Both are needed to establish a track line, protect homeowners and keep commerce moving.” (Photo courtesy of the Great Lakes Maritime Task Force)