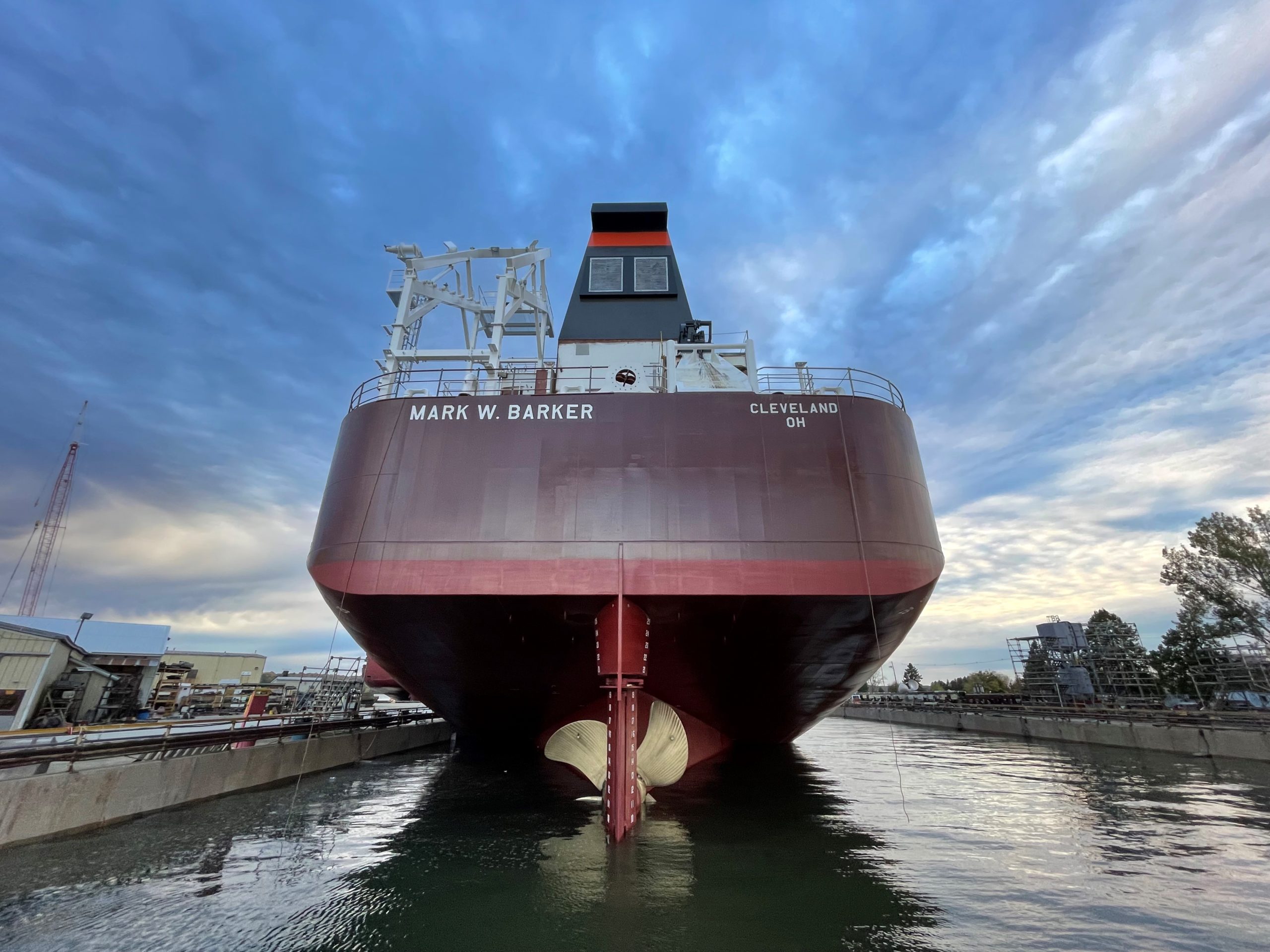 The first U.S.- flagged Great Lakes freighter to be built on the Great Lakes in nearly 40 years, the M/V Mark W. Barker – while still under construction – was “launched” or otherwise floated in the water in the large drydock at the Sturgeon Bay shipyard on October 28.

“Today is truly gratifying for our company to commemorate the first time the completed hull of our new ship has touched water,” said Mark W. Barker, President of The Interlake Steamship Company and namesake of the new vessel, which is the first new ship constructed for the maritime company since 1981.

“It is a proud day for the men and women of our shipyard to celebrate the progress made on the M/V Mark W. Barker,” Mr. Thayse said. “Sharing this launch ceremony with the Interlake Steamship team along with Helen and Ian Sharp makes this day even more special.”

“We are dedicating this historic launch of our new ship to the men and women who have been building these Great Lakes vessels on our freshwater shores for more than 100 years,” said James R. Barker, Chairman of The Interlake Steamship Company. “We honor all of the skilled professionals who have worked countless hours, day in and day out, year after year, behind the scenes constructing these tremendous bulk carriers. Their workmanship and talent are welded into every seam of these vessels that go to sail long productive lives on the Lakes, safely carrying mariners and the raw materials that are the building blocks of America.”

In particular, James R. Barker pointed to the contribution of Ian Sharp, Interlake’s Director of Fleet Projects, who spearheaded the design of the new build in-house from its conceptual phase to today. Mr. Sharp, a native of Scotland, has contributed his talents in ship design and shipbuilding to create a legacy that includes dozens of vessels throughout his more than five-decade career. 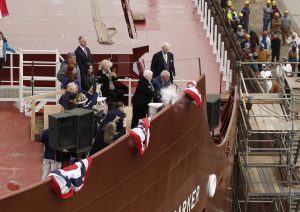 His wife and chief supporter of 56 years, Helen Sharp, was selected as the honorary launch sponsor.

“Motor Vessel Mark W. Barker, your family name is strong, you are built strong by hard-working men and women and you will work strong. May God bless you and all who sail with you,” said Helen Sharp as she broke the ceremonial bottle of champagne against the bow of the ship just above the vessel’s nameplate.

Tugs in the shipyard blew congratulatory salutes, and then shipyard workers opened the valves in the dry dock to let water flow in. The process of floating the boat took about six hours.

President and CEO of Fincantieri Marine Group Dario Deste offered his congratulations to the teams at Bay Shipbuilding and Interlake. “Well done,” said Mr. Deste. “May this vessel demonstrate not only the importance of commerce on the Great Lakes but also the power of partnerships between two tremendous companies.”

The ship is expected to be complete and underway in Spring 2022. In the meantime, interior work on the vessel’s accommodations and mechanical and engineering systems continues. (Photo Fincantieri Bay Shipbuilding)