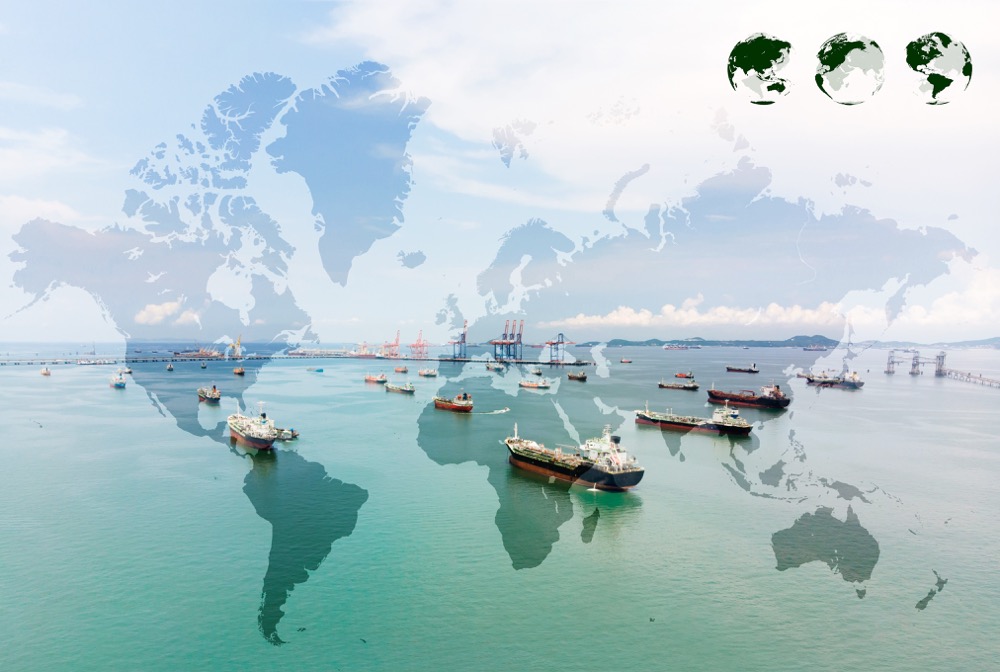 The Getting to Zero Coalition aims for “commercially viable” zero emission ships by 2030 but has yet to quantify this target. A quantified target would help mobilize commitment and action across stakeholders:

– Cargo owners could be mobilized to pay a premium for zero emission fuels on a corresponding percent of their freight,

– Investors could quantify the amount of investment needed across the value chain,

– Ship owners could plan investments in new builds and retrofits, and

– Regulators could be called on to ensure a level playing field is in place to enable the transition.

In 2019, UMAS conducted a study to describe the most technologically feasible paths to achieving decarbonization for international shipping by 2050 – which would put the sector in line with a 1.5C trajectory – and by 2070 – the IMO aligned trajectory. In both cases zero emission fuels needed to make up 27 percent of energy by 2036. So, what does that mean for the fuel adoption rate needed by 2030?

The adoption of zero emission fuels in shipping is bound to follow an S-curve, as has been the case with all historical industrial transformations. An S-curve consists of three phases. It starts with a slow emergence phase, when there is rapid learning and the costs start to come down. After this, the diffusion phase starts with rapid adoption of the new technology, with positive feedback loops between different actors raising confidence, increasing demand and investment throughout the value chain. The curve flattens out again in the reconfiguration phase as the new technology is adopted and a new normal is established.

To estimate the “tipping point” shipping needs to achieve by 2030 for rapid diffusion of zero emission technology thereafter, we generated an S-curve to fit the UMAS 2036 and 2046 milestones. These establish that to reach decarbonization by 2050, zero emission fuels need to represent 27 percent of total energy by 2036, and 93 percent by 2046. Though the Getting to Zero Coalition has not yet aligned on a target year for full decarbonization, it is preferable to have a 2030 target that enables decarbonization in line with the Paris Agreement. The resulting curve indicates the need for a 5 percent adoption rate of zero emission fuels by 2030.

Based on this the UN Climate Champions have set 5 percent zero emission fuels by 2030 as the Race to Zero Breakthrough for international shipping, campaigning to achieve this near term milestone to ensure that the sector is on track for net zero emissions before 2050. The Race to Zero Breakthroughs for nearly 30 sectors were launched at the World Economic Forum’s Davos Agenda in January 2021 with Al Gore, COP Presidents Alok Sharma and Carolina Schmidt, and UNFCCC Executive Secretary Patricia Espinosa.

How can the 5 percent target be reached?

There are three primary subsegments of shipping that could move first and achieve this 5 percent target.

Can supply meet a five percent demand by 2030?

The Getting to Zero Coalition’s definition of “zero carbon energy sources” is intended to be inclusive of fuels derived from zero carbon electricity, biomass and the use of carbon capture and sequestration. It excludes, however, energy sources derived from carbon capture and utilization based on the combustion of fossil fuels. The definition includes green hydrogen and its derivatives, such as ammonia and methanol, blue hydrogen and its derivatives, as well as sustainable biofuels.

In terms of scalability, the hydrogen-derived fuels have the biggest long-term potential for rapid scaling in the following decades and should be a significant part of the 2030 fuel mix. A key question is therefore: Will it be possible to supply enough hydrogen-derived fuels for international shipping to enable up to a 5 percent penetration by 2030?

UMAS estimates that the overall energy need for shipping will be 12.9 Exajoules in 2030. Five percent of this amounts to 0.64 Exajoules, or 15.8 million tons of heavy fuel oil equivalent. Assuming that the hydrogen-based fuel used is ammonia, to produce it in this amount would require roughly 60 gigawatt of green hydrogen electrolyzer capacity.

60 gigawatt of green hydrogen electrolyzer capacity for shipping by 2030 is achievable when considering the large-scale ambitions announced by leading economies. To name a few:

In addition, the Green Hydrogen Catapult is an initiative by seven green hydrogen industry leaders – Yara, Iberdole, Orsted, Acwa Power, CWP renewables, Snam and Envision – to deliver 25 gigawatt of green hydrogen electrolyzer capacity by 2025 at 2$/kg. Their long-term goal is to align the production and use of green hydrogen with a trajectory that displaces fossil fuels at a rate consistent with achieving net zero global emissions by 2050. With a green hydrogen price of $2/kg, the price of green ammonia would be roughly double that of heavy fuel oil.

To reach the right quantity and price of green hydrogen, several other actions are needed to boost zero emission fuels by 2030. For example, large scale system demonstrations are needed to showcase feasibility and draw conclusions. Freight purchasers can also give important demand signals by committing to use zero emission fuels where available at a certain premium. The need for a rapid deployment of capital and low cost long-term investments requires institutional investors and IMO regulation in line with Paris targets focusing both on operational efficiency measures and on incentives to adopt zero emission fuels.

In conclusion, a quantified target for zero emission fuel adoption by 2030 would help mobilize action from industry stakeholders. To enable decarbonization of international shipping by 2050 (1.5C aligned), zero carbon fuels will need to account for approximately 5 percent of the fuel mix by 2030. Even if the target is a 50% absolute reduction by 2050, this still requires rapid growth of zero carbon fuel use in the 2030s, which requires a similarly small initial use by 2030. Achieving this is feasible on all counts – with regards to fuel supply, vessel technology, port infrastructure, safety, demand, government commitment and finance.

The views expressed in this Insight Brief are those of the authors alone and not the Getting to Zero Coalition or the Global Maritime Forum, Friends of Ocean Action or the World Economic Forum.

About the Getting to Zero Coalition

The Getting to Zero Coalition is an industry-led platform for collaboration that brings together leading stakeholders from across the maritime and fuels value chains with the financial sector and other committed to making commercially viable zero emission vessels a scalable reality by 2030.