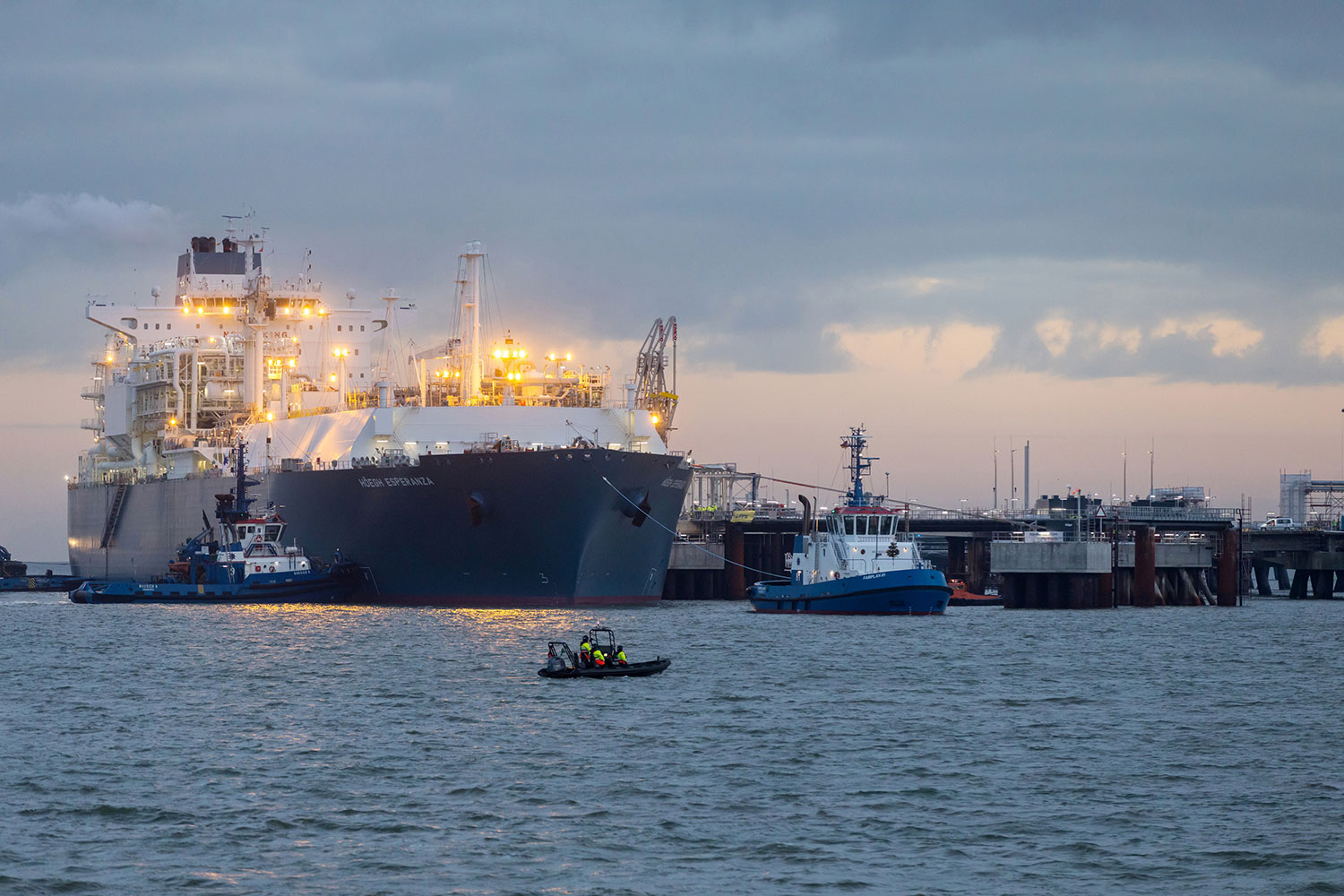 Wilhelmshaven – The first German floating terminal for importing liquefied natural gas (LNG) has officially been commissioned for service in Wilhelmshaven on December 17. Even before Christmas, LNG will be re-gasified and conveyed via the newly created Wilhelmshavener Anbindungsleitung (Wilhelmshaven Connector Pipeline/WAL) into the German long-distance gas grid.

This was made possible by the recent arrival of the floating storage and regasification unit (FSRU) Höegh Esperanza which was chartered by the government from Norwegian company Höegh LNG. An annual volume of at least five billion cubic metres of natural gas is expected to be imported and fed into the German long-distance gas grid via the LNG Terminal in Wilhelmshaven. This represents some six percent of the German gas consumption. That means that this volume will replace some eleven percent of Germany’s gas imports from Russia.

During the past ten months, Niedersachsen Ports, OGE, and Uniper worked hand in hand, and in record time created the infrastructure on the North Sea shore in the shape of the Import Terminal and the Wilhelmshaven Connector Pipeline (WAL).

Wilhelmshaven offers ideal conditions, both, from a maritime and from a logistic point of view. LNG tankships of all sizes will be able to call the facility, regardless of the tides and in compliance with the highest international safety standards. For the connection to the existing LNG long-distance grid, a gas pipeline with a total length of 26 kilometres was constructed, the implementation of which was accomplished by the company OGE.

At the floating LNG Terminal, the LNG is delivered via tankships and conveyed onto the FSRU to be vaporized, thus converting it back to a gaseous state. Subsequently, the gas is fed via the Wilhelmshaven Connector Pipeline (WAL) into the German long-distance gas grid at Etzel.

Germany’s first LNG jetty project was performed under an immense time crunch and is of stellar importance for ensuring that Germany’s gas supply is secure. Niedersachsen Ports performed the requisite works on the port infrastructure; construction of the terminal itself was carried out by Uniper. Prior to that, Niedersachsen Ports, in a joint effort with Uniper, had examined the feasibility of such venture.

Some 1,000 people and more than 3,500 pages of application documents were generated and processed to achieve the fast implementation.

Prof. Klaus-Dieter Maubach, CEO Uniper said “Today, after a project duration of merely ten months, we are proud to commission Germany’s first LNG Terminal in Wilhelmshaven. This goes to show what Germany is capable of and it could be the blueprint for other projects of the energy transition. I would like to thank all the people that helped implement this project before the first critical winter: the project team at Uniper, the project partner companies, and last, but not least, the participants in the public sector.  For the short term, we are now able to cover about 6 percent of our gas needs with LNG that is shipped directly to Germany. But one thing is clear: The investments in this project are also investments in a future without CO2: In the mid-to long-term, Uniper’s project ‘Green Wilhelmshaven’ is slated to make a great contribution to the decarbonization of the German industry through the import of green ammonia and through the production of green hydrogen.” Photo: Niedersachsen Ports