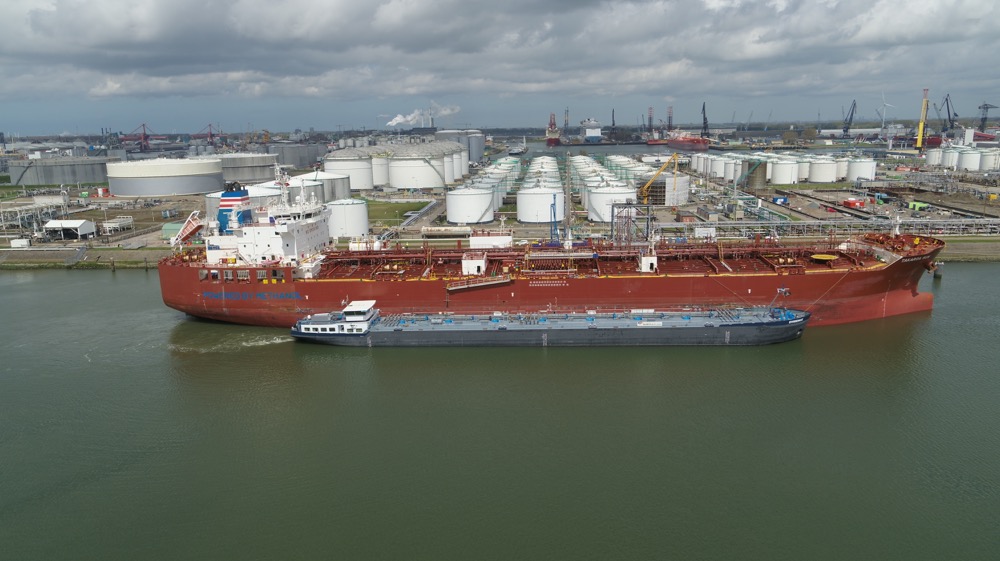 VANCOUVER, British Columbia and ROTTERDAM, The Netherlands, – Waterfront Shipping, a wholly-owned subsidiary of Methanex Corporation (Methanex), yesterday demonstrated the ease of ‘barge-to-ship’ bunkering as part of the launch of the world’s first barge-to-ship methanol bunkering operation at the Port of Rotterdam. Waterfront Shipping’s Takaroa Sun—a long-term chartered vessel owned by NYK Bulkship (Asia) Pte. Ltd., and a subsidiary of NYK—which was accorded special mention for Green Ship of the Year, participated in the operation as the inaugural methanol-powered ship to be fuelled by a commercial bunker barge.

The premiere bunkering operation took place at the Vopak Terminal Botlek of Royal Vopak with a bunker barge, MTS Evidence, operated by TankMatch. The Port of Rotterdam is the largest seaport in Europe with approximately 30,000 visiting seagoing vessels and 100,000 inland vessels per year.

“Waterfront Shipping has been operating methanol-fuelled ships for over five years now, accumulating over 100,000 combined operating hours—and has been bunkering methanol for its methanol dual-fuelled vessels via cargo shore pipelines near Methanex’s production facilities,” said Paul Hexter, President of Waterfront Shipping. “When appropriate safety measures are followed, we know that methanol is safe to ship, store, handle and bunker using procedures similar to conventional fuels. Today’s methanol bunkering demonstration is another step in helping the shipping industry with its journey to reduce emissions.”

The bunkering demonstration provided further evidence of methanol as a low emission, safe and simple to handle clean fuel that offers a future-proof pathway to a low-carbon future. Liquid at ambient temperature and miscible in water, methanol produces up to 15 percent lower carbon emissions during combustion than traditional fuel oil and is MARPOL Annex VI compliant for SOx emissions, particulate matter and Tier III NOx emissions.

“As shipowners begin to engage in the energy transition, the Vopak terminals have the capabilities and experience to also work with operators of methanol-fuelled vessels and meet their specific requirements,” said Dick Richelle, Commercial Director of Royal Vopak. “Methanol is globally available and has similar storage needs to conventional fuels. This demonstration proves that methanol bunkering is a safe and realistic option as a clean-burning fuel with a sustainable pathway.”

“We are increasingly hearing from vessel operators who want to understand their options for lowering their emissions and want a simple path to IMO compliance,” says Andre Nieman, Chief Executive Officer of TankMatch. “Bunkering with methanol requires a similar level of risk assessment and safety management as other conventional bunker fuels and we found this process simple to manage and execute.”

Waterfront Shipping recently ordered an additional eight methanol-fuelled vessels to be delivered between 2021 and 2023—with this latest order, approximately 60 percent of its 30-ship fleet will be powered by lower emission, methanol dual-fuel technology.

Methanol is an essential ingredient for modern-day life and is used to produce everyday products including paints, carpets, fabrics, building materials, and a variety of health and pharmaceutical products. As governments and stakeholders around the world look to reduce their dependency on conventional fuels, improve air quality and reduce greenhouse gas emissions, methanol has emerged as an attractive, economically viable alternative fuel. Today, close to half of global methanol demand is used in fuels and energy-related applications. As a marine fuel, methanol is safe, cost-effective and globally available at close to 90 of the world’s 100 largest ports. Methanol meets the shipping industry’s increasingly strict emissions regulations—it significantly reduces emissions of sulphur oxides (SOx), nitrogen oxides (NOx) and particulate matter, and when produced from renewable sources, offers a pathway to meeting future emissions regulations without further shipowner investment. To view a video about methanol, click here.

Methanex is a Vancouver-based, publicly traded company and is the world’s largest producer and supplier of methanol to major international markets.