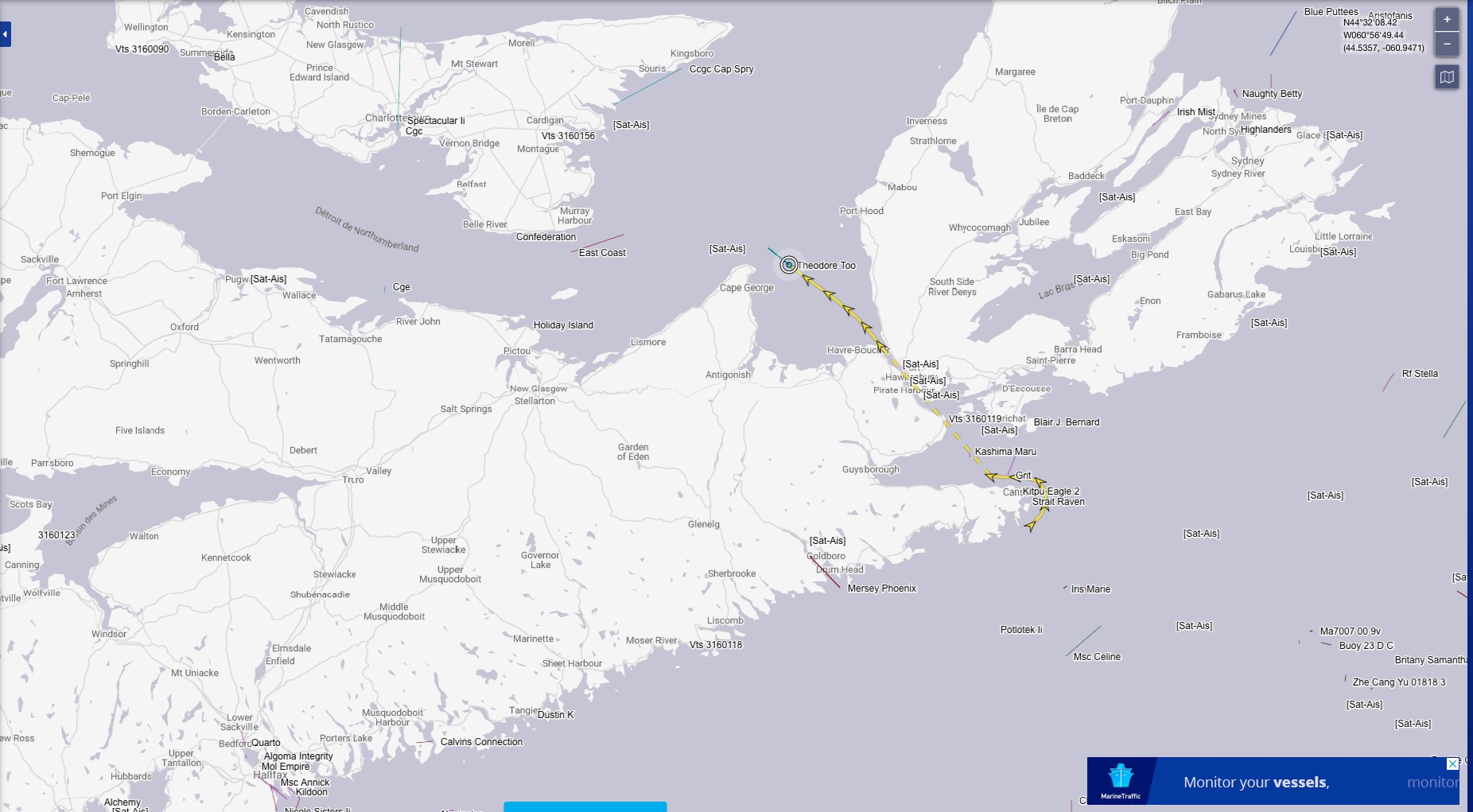 Saturday, 15h30 EDT, Theodore TOO is chugging along, having passed Canso Straight and is approaching Northumberland Strait. See original story below.

Burlington, ON, June 9, 2021 — Theodore TOO, a 65-foot life-sized reproduction of Canada’s “Theodore Tugboat” main character in the  the beloved CBC series “Theodore Tugboat”, is set to embark on his journey from Halifax to the Port of Hamilton where the vessel will make his new home, but not before thanking his Maritime family and fans for their indelible role in his story.

While reaffirming Theodore TOO’s unwavering commitment to promoting Canada’s Maritimes, the tugboat’s owner, Blair McKeil, announced today a collaboration with one of the nation’s leading water education and conservation advocates, Swim Drink Fish, which will see Theodore TOO play a larger role in promoting several of the organization’s initiatives including its Great Lakes Guide. Plans are also in the works to have Theodore TOO actively advocate for employment in Canada’s marine and shipbuilding industry in the face of a critical labour shortage through federal and industry-driven revitalization initiatives.

The partnership with Swim Drink Fish will see Theodore TOO connect Canadians of all ages and backgrounds to the water, enjoy the outdoors and Great Lakes. He will play an active and visible role integrating with their existing programs focused on helping all Canadians, including those new to the country and in urban centres, to embrace stewardship programs aimed at responsible water conservation and restoration strategies for our Great Lakes.

“We must ensure access to clean water and promote employment in one of our nation’s most vital and skill-intensive sectors,” says Blair McKeil, President and CEO, Breakwater Investments. “We’re incredibly honoured to join Swim Drink Fish and lend support to its work with Indigenous leaders and sustainability thought leaders in their mission-critical work rallying Canadians around a clean water strategy built on the conservation, restoration and protection of our waterways and Great Lakes. Tugboats have a big job on the water and Theodore TOO has an even bigger mandate now. We’re incredibly excited about the role he’ll play in promoting sustainability.

“As guardians and stewards of 20 percent of the world’s fresh water, we have an enormous accountability to ensure it is swimmable, drinkable and fishable,” Mark Mattson, President, Swim Drink Fish. “Building connections with the water is a critical step in engaging us all as their guardians. Theodore loves the water as much as we do. He’s the perfect ambassador for our Great Lakes Guide which is focused on helping Canadians of all ages and backgrounds from urban cities to rural communities to get to the water’s edge. This collaboration is great news as we look to the 50th Anniversary of the Great Lakes Water Quality Agreement and efforts to strengthen our environmental stewardship, while exciting young Canadians about opportunities the sector and the blue economy, grounded in sustainable oceans, will usher in.”

Engaging Theodore TOO in efforts to propel Canada’s marine sector forward at home and on the world stage is among the future plans for the tug. He’ll also be actively championing employment opportunities in the industry and the vital skills needed to build, maintain, and crew ships that keep Canada competitive and safe.

“There’s a big story to tell from software, electronics and systems needed for commercial, civil and defence marine, to propulsion, naval architects and shipbuilding,” says McKeil. “Our hope is for Theodore TOO to bring awareness to both sailing and shore-based job opportunities, shining a bright light on industries supporting Canada’s supply chain including ports, cargo terminals, shipyards, offshore supply bases and shore-based manufacturing. The McKeil family is incredibly humbled and proud to be a part of Theodore TOO’s legacy and exciting future helping an entire sector and waterways continue to flourish on what we hope will be a sustainable and competitive tide while helping to pass along Canada’s rich land and sea knowledge, history, and skills to future generations.”

A 4-person crew will push off from Halifax June 10th. Theodore TOO is scheduled to arrive in the Port of Hamilton where he will be converted to biodiesel signalling his future efforts as a sustainability champion.

In the interest of public safety and considering COVID-19 and various provincial mandates, Theodore TOO will not be inviting individuals to board the vessel at various ports of call during his voyage.

Theodore TOO was built at Snyder’s Shipyard in Dayspring, Nova Scotia and launched on April 19th, 2000, while his official birthday (certificate day) is May 5th, 2000.