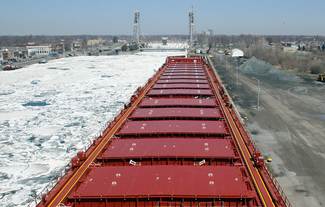 As the IJC’s Board set water flows at 10,400 cubic meters (sufficient to fill four Olympic sized swimming pools per second) for a record setting length of time, the SLSMC was able to safely sustain navigation thanks to the implementation of special mitigation measures, including the imposition of reduced speed limits and the implementation of one-way navigation in certain portions of the river. “From farmers eager to realize the sales of their crops to municipalities dependent upon ships for the supply of road salt, the Seaway demonstrated its ability to serve as a sustainable and reliable transportation artery for a vast array of clients. Thanks to the diligence of SLSMC employees, ship captains and pilots, the season ended on schedule and without any serious incidents,” said Terence Bowles, President and CEO of the SLSMC.

The 2019 tonnage results on the Seaway reflect the more challenging conditions encountered last year as compared to 2018, in which Seaway tonnage was at a 10 year high. Trade tensions, difficult navigational conditions due to very high water flows within the St. Lawrence River, combined with adverse weather conditions impacting grain harvests, all served to restrain total cargo volumes. “There is little doubt that trade tensions certainly were felt within the shipping industry, and we earnestly hope that the forthcoming implementation of the USMCA will be one of several improvements within the global trading arena, providing for a better cargo outlook in 2020,” said Mr. Bowles.

Within the Montreal / Lake Ontario Section, the 2019 navigation season’s last commercial transit occurred on December 31st with the tug Océan Serge Genois clearing the St. Lambert Lock ?at 5:13 AM. Within the Welland Canal, a pilot project was in place to extend the season and provide ships with the opportunity to transit the canal until January 8th. Thanks to this initiative, 16 commercial transits were completed after December 31st, with the G3 Marquis performing the last commercial transit of the Welland Canal on January 7th, clearing Lock 1 at 7:45 PM.

The St. Lawrence Seaway marked its 60th anniversary in 2019. During the last 60 years, almost 3 billion tonnes of cargo has transited Seaway locks, enabling a vast array of U.S. and Canadian businesses to enjoy trade within North America, and with more than 50 countries around the world. “Thanks to a comprehensive modernization program which was completed over the past 10 years, including the implementation of Hands Free Mooring, the stage has been set for a highly competitive St. Lawrence Seaway that will sustainably support business growth and employment for decades to come,” said Mr. Bowles. (photo Bill Bird )