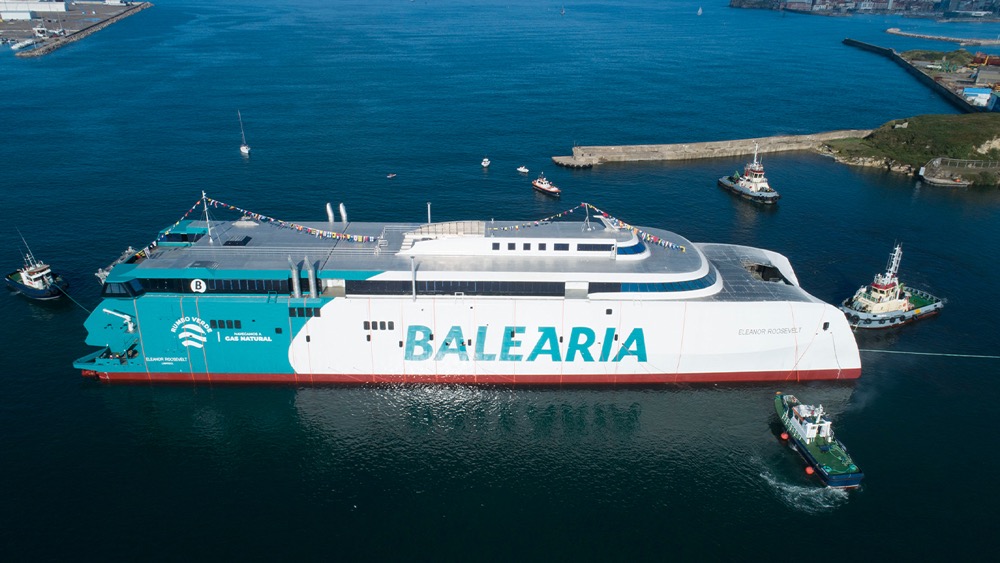 The world’s first fast ferry for passengers and cargo, powered by natural gas internal combustion engines, the Eleanor Roosevelt de Baleària, was launched yesterday at the Armon shipyard in Gijón, Spain. The innovative catamaran is scheduled to start operating in the first quarter of 2021 according to Baleària who tapped the cost of the ferry at 90 million euros.

Commenting on the milestone, the company’s president Adolfo Utor, said it represents the culmination of a number of teams combining to build the first LNG-fuelled catamaran.

He further noted the vessel, “incorporated new features to adapt to the current health crisis context, taking into account the distance between seats, wider aisles and digitization, to ensure greater safety.”

The Eleanor Roosevelt will also be the world’s longest fast ferry. Specifically, the ship is 123 metres long and 28 wide, with a capacity for 1,200 passengers and a warehouse for 500 linear meters of trucks and 250 cars, or alternatively 450 cars.

On-board comfort has also been improved by incorporating a state-of-the-art stabilization system, which will considerably reduce movement. Vibrations and noise will be minimized to infinite levels thanks to an elastically floating superstructure and the installation of high-tech insulation. The ship will also have an escalator and elevator to the upper deck, unprecedented elements in a ship of this type.

The four dual GN / GO engines built by Wärtsilä in Finland have a power of 8,800 kW each, which will allow the Eleanor Roosevelt to reach a service speed of 35 knots (with a maximum speed of more than 40 knots). The two tanks to store LNG suppose a range of 400 nautical miles in gas navigation (1,900 in the case of combined gas / diesel).

The name of Baleària’s new ship, Eleanor Roosevelt, is a tribute to this writer, gender equality activist and advocate for the civil rights of African and Asian Americans and refugees from World War II. Roosevelt stood out for being the first president of the United Nations Commission on Human Rights and one of the promoters of the Universal Declaration of Human Rights. This is the shipping company’s sixth vessel that pays tribute to pioneering women in their respective disciplines, in accordance with their commitment to one of the sustainable development goals: equality and the empowerment of women.

The fast-ferry project kicked off in December 2018 at the Armon shipyard in Gijón, which has coordinated the project and carried out the systems engineering, with the support of Cotenaval Valencian engineering. The Australian, Incat Crowther, wasin charge of the design. The engineering support was provided by Cotenaval Valencia. Canal tests have been completed by the Norwegian company Marintek-Sintef with Bureau Veritas being the classification society.