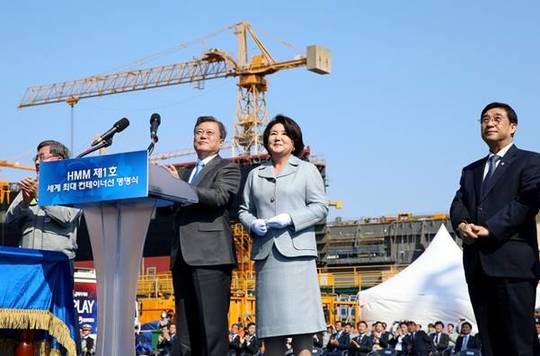 About 160 distinguished persons attended the ceremony, including Moon Jae-in (President of the Republic of Korea) and First Lady Kim Jung-sook who served as godmother to officially name the ship during the ceremony.

HMM Algeciras is the first of twelve 24,000 TEU-class vessels scheduled to be sequentially delivered until September 2020.

In September 2018, HMM signed a formal contract for its twenty eco-friendly mega container vessels with three shipyards – DSME, HHI(Hyundai Heavy Industries) and SHI (Samsung Heavy Industries) in an effort to take proactive actions towards market change as well as from a sustainable profit-generating st

The vessels are basically equipped with a scrubber system in compliance with IMO 2020 environmental regulations. Optimized hull design and highly efficient engines are also expected to improve energy efficiency and reduce carbon emissions.

“For me, it is very meaningful that HMM takes delivery of the most technologically advanced containership in this difficult time. I would like to celebrate it and hope that HMM continues to secure a competitive advantage as a Korean national flagship carrier,” says Moon Jae-in, who a few hours earlier vowed all-out support for the country’s shipping industry so that it can join the world’s top five.

The 399.9m long HMM Algeciras will be deployed on a service linking Asia with Northern Europe via the Suez Canal. MSC,CMA CGM and Evergreen have already opted for 24-row wide mega ships approaching the 24,000 teu mark.

Container ships have been getting bigger and bigger with every new year, passing the 20 000 teu mark in 2017.