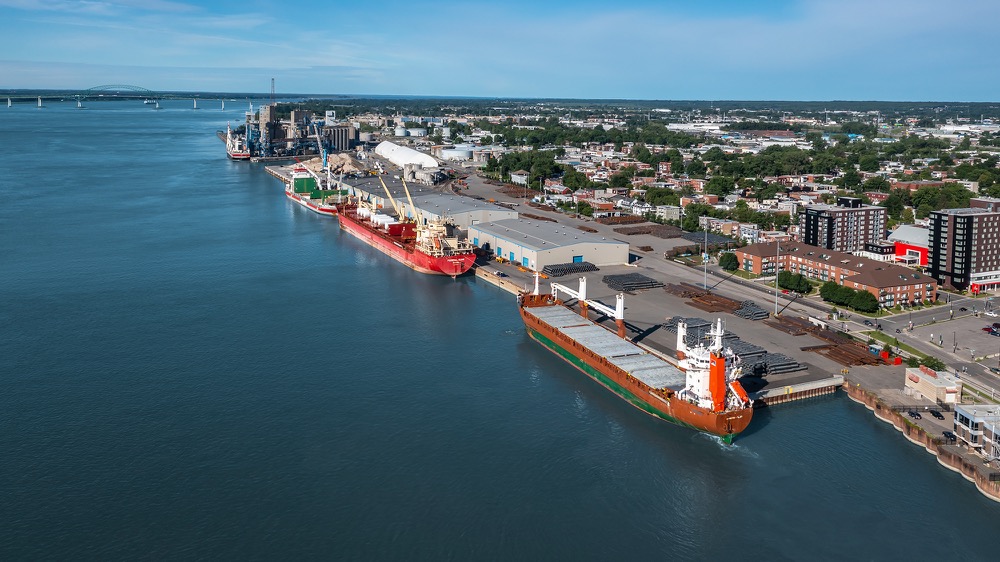 TROIS-RIVIÈRES – A major finding to launch the second edition of the Assises québécoises du transport maritime: despite the crisis caused by the Covid 19 pandemic, the industry as a whole has experienced significant growth in its activities over the past decade and shows promise for the future.
According to the first State of Maritime Transport, developed by the applied research centre Innovation maritime, the tonnages handled in Quebec’s main ports have grown between 16 and 40% between 2010 and 2021. While the pandemic has taken a toll on the results of several economic sectors, these figures show that the maritime industry has been able to weather the storm.
“The figures speak for themselves: Quebec is doing admirably well and is following the upward trend in maritime traffic observed worldwide. The pandemic has allowed our industry to confirm its role as a strong link in the North American logistics chain,” said Mathieu St-Pierre, President and CEO of the St. Lawrence Economic Development Council (SODES).
Another finding of Innovation maritime: bulk carriers carrying solid materials had a second consecutive record year in 2021 with 4,197 movements. The transport of ore alone represents more than 70,000 tonnes annually, essentially for export markets. As for vessels transporting liquid bulk, their activity has also increased compared to last year, which is good news, given the significant drop experienced at the height of the crisis.
In addition to these convincing results, the survey conducted by the research centre’s experts illustrates the vital nature of the industry for certain regions of Quebec. This is the case of the Lower North Shore, where the eight ports proved to be indispensable to local communities during the pandemic. More than 56,000 tonnes of essential products – gasoline, general cargo, machinery, food, etc. – were handled there in 2020.
At the Port of Gaspé, more than 84,315 tonnes of general cargo – diesel, salt, sand, etc – were handled in 2018. This performance has the effect of stimulating the growth prospects of the regional economy, notably to support the development of projects aimed at manufacturing large blades for the wind industry.
While the Quebec maritime industry is working on the decarbonisation of its activities, the study highlights the fact that the transport of goods by boat presents the best performance in terms of distance and greenhouse gas emissions per litre of fuel. The researchers conclude that a cargo ship can travel 243 kilometres on a single litre of fuel oil and produce only 11.9 grams of GHGs per tonne of cargo. This is much better than rail (213 km – 14.2 g GHG/tonne) and road transport (35 km – 75.5 g GHG/tonne).
However, the maritime industry is facing major challenges, as shown by the Innovation maritime study, particularly in terms of manpower, with 4,000 positions to be filled in the short term for both sea and land-based personnel.

An industry that is appreciated but little known by the public

Furthermore, in its survey aimed at evaluating the general perception of the Quebec maritime industry and its importance for the economy, the Léger firm concludes that the industry is well perceived by about half of Quebecers (51%). However, four out of ten Quebecers do not know enough about it to have an opinion on the subject.
“We are pleased to see that three quarters of respondents consider the industry and its activities to be important to the Quebec economy. But, clearly, our industry must redouble its efforts to make itself known and attract the new workers it needs to continue its progression,” concluded the CEO of SODES.

About SODES
The St. Lawrence Development Council is a non-profit organization whose mission is to protect and promote the economic interests of the St. Lawrence River region. It represents the maritime community, which includes private and public interests whose activities have a direct and indirect impact on the river’s economy, and this in all regions of Quebec. SODES is the privileged interlocutor of governments as regards the development and economic activity of the St. Lawrence, including the transport of cargo and passengers, regional development or the environment.