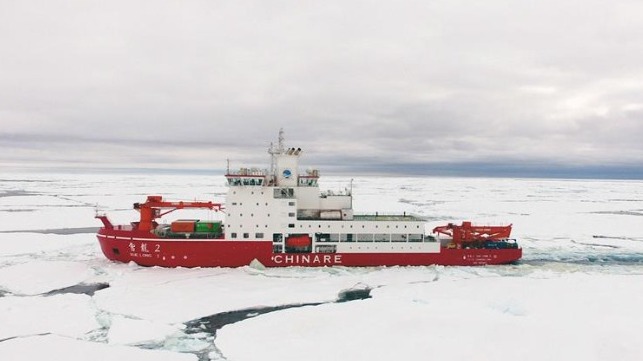 A report published by Maritime-Executive indicates that China is advancing its Arctic ambitions with the icebreaker Xuelong 2 undertaking the second scientific expedition in Arctic waters. The vessel departed from Shanghai last month and is currently engaging in a three and half month odyssey in the Arctic Ocean with a mission of advancing Chinese interests in the region.

The vessel, which terminated an Antarctic expedition in May, is expected complete a voyage of about 15,000 nautical miles before returning to Shanghai in late September, according to state media CGTN.

Chinese officials declared the expedition plans to monitor sea, marine ice, atmosphere, microplastics and ocean acidification in the high seas of the Arctic through navigation observation, cross-sectional survey and satellite remote sensing to obtain hydrological, meteorological and biological data of the region.

It will also conduct scientific surveys in the Gakkel Ridge in the Arctic Ocean to learn about the formation of rocks and magma and the geomorphic features there to further enhance knowledge of the natural environment in the North Pole.

The Xuelong 2 voyages form part of Chinese ambitions to take a leadership role in the North Pole after declaring itself a “Near-Arctic State” in its 2018 China Arctic Policy, a declaration that has raised concerns among the global community and environmentalists, Maritime-Executive noted.

“China’s policy goals on the Arctic are to understand, protect, develop and participate in the governance of the Arctic, so as to safeguard the common interests of all countries and the international community in the Arctic, and promote sustainable development of the Arctic,” states the policy document.

The policy is based on the assertion that the Arctic is critical to its strategic, economic and environmental interests, something that grants China rights to scientific research, freedom of navigation and overflight, fishery, cable and pipeline laying and resource development.

“The natural conditions of the Arctic and their changes have a direct impact on China’s climate system and ecological environment, and, in turn, on its economic interests in agriculture, forestry, fishery, marine industry and other sectors,” states the policy document.

China is not a member of the Arctic Council that groups eight Arctic states: Canada, Denmark, Finland, Iceland, Norway, Sweden, Russia and the United States. But China is among several non-Arctic countries with observer status.

Owned and managed by the Chinese Polar Institute, the Chinese-built Xuelong 2 measures 400 feet long with a 73-foot beam. The icebreaker has a displacement of nearly 14,000 tons and a navigation capability of 20,000 nautical miles. The vessel is designed to break 1.5-meter-thick ice at speeds of two to three knots in both ahead and astern directions and can operate in temperatures down to -30oC. It has a maximum speed of 15 knots and can accommodate 90 crew and researchers. Its current voyage is China’s twelfth Arctic expedition. China has also conducted 37 Antarctic expeditions.