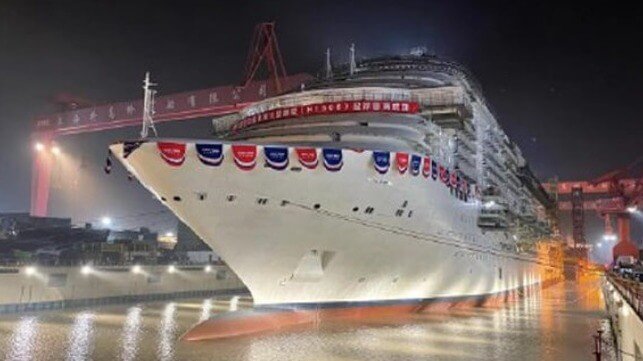 SHANGHAI – In a festive ceremony, China marked a key milestone in its long-standing efforts to develop its cruise ship construction industry. On December 17, the first large cruise ship built in the Land of the Rising Sun was floated and transferred to the docks for further construction. It is expected to be delivered in September 2023, according to Shanghai Waigaoqiao Shipbuilding Co Ltd, a subsidiary of China State Shipbuilding Corporation Limited.

Both cruise ships are based on the Carnival Vista Class design developed by Fincantieri. The Italian shipyard is also advising CSSC on the project. Each cruise ship will be 1,061 feet in length with a width of 122 feet and a maximum draft of 28 feet. A 9.6 MW main diesel engine with a total power of 62.4 MW and two 16.8 MW pod propellers will provide propulsion with a top speed of 22.6 knots. The ships will each accommodate up to 5,246 passengers and while the amenities are tailored to the Chinese market, they will include an entertainment area with a large performing arts centre, great restaurants, specialty restaurants, various bars, cafes , shopping malls, art halls, children’s centres, spa and water.

Waigaoqiao Shipbuilding of China State Shipbuilding Corporation cut the first steel of the new cruise ship in October 2019 and began assembly a year ago. The site had to develop new facilities at each stage of the project.

« As one of the most difficult types of ships to design and build, large cruise ships are the only high-tech, high-value-added products that China has yet to conquer, » said the CSSC.

“At Carnival, we are committed to supporting CSSC and our joint venture CSSC Carnival, which is the foundation of Carnival’s strategy in China,” said Arnold Donald, CEO of Carnival Corporation, in a video address celebrating the floating of the 1508 hull.

As the next step in China’s development of its domestic cruise ship industry, the Italian classification society RINA last week granted the very first approval in principle (AIP) for a large cruise ship designed entirely in China. “This is the first large-scale cruise ship with intellectual property rights that China has independently developed and designed, thereby breaking the technical blockade and long-term monopoly of foreign countries,” SCCS said when receiving the AIP. The design is for a 150,000 gross ton cruise ship measuring 1,081 feet by 126 feet. Photos: CSSC