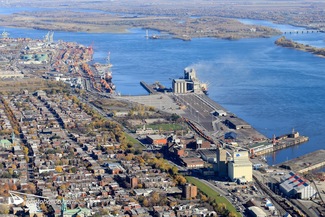 « We are seeing improvements and are concentrating now on restoring full fluidity with CN and our terminal operators, » said Lane Farguson, Communications of the Port of Halifax.

He also confirmed than an ACL vessel, he Atlantic Star, called Halifax last week. Previously, the port’s longest-standing customer had provisionally diverted its vessels to New York and Baltimore.

« Freight trains have been entering and departing from Montreal normally since February 26, » said Mélanie Nadeau, spokesperson for the Port of Montreal. « Trains carrying goods from the West (notably grain) are now entering in normal fashion. »

Some 2,500 containers still parked in the port areas are expected to shipped out within a few days, Ms. Nadeau said.

« The recovery is moving along nicely, » indicated Michael Fratianni, President and CEO of Montreal Gateway Terminals Partnership (MGTP), biggest terminal operator at the Port of Montreal with two facilities.

By the middle of this week, we should be back to regular container dwell times of three days or so, » he told Maritime Magazine.

The backlogs that had begun immediately after blockades sprung up on February 6 were so substantial that MGTP enacted force majeure, which allows a party to be released from contract obligations in situations of circumstances beyond their control. This provision was lifted on February 24 with the resumption of limited train services as the volume of import containers built up.

Among other things, the force majeure encouraged shippers to move boxes off the port with trucks. In addition, CN and CP Rail co-operated to move vital supplies to certain communities.

The blockades by Indigenous groups protesting the construction of a natural gas pipeline in northern British Columbia disrupted track networks operated by both CN and CP, but CN was hit hardest by far.

On Sunday (March 1), a draft deal was reached between Wet’suwet’en hereditary chiefs and senior government ministers from Ottawa and Victoria. But a blockade by the Mohawk Nation in Kahnawake since February 8 was still in place on a CP main line near Montreal used by eight freight trains daily. The Mohawk community was meeting later today (March 2) to discuss whether to dismantle the blockade. (Photo Port of Montreal)