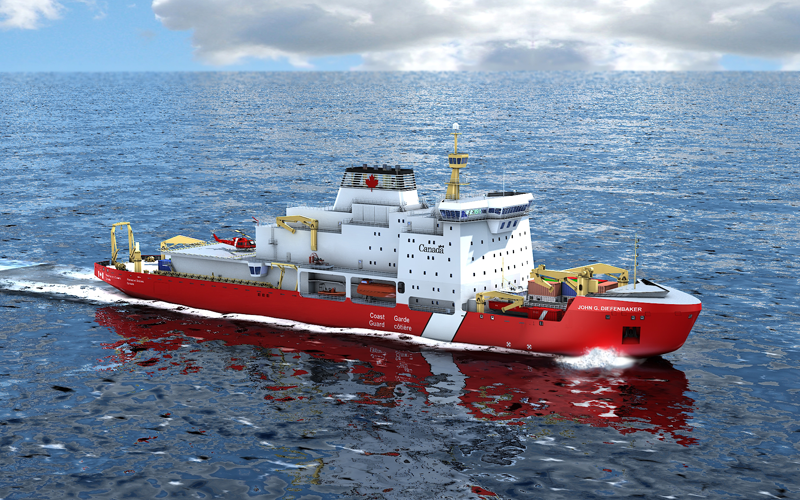 In a surprise announcement, the Canadian government today said it will move forward with the construction of two Polar icebreakers instead of a single vessel that had been originally planned a decade ago under the national shipbuilding program.

The other heavy icebreaker is slated to be built by Davie Shipyard in Lévis, Quebec that has ardently sought to be chosen for the task given its long past experience in building naval and coast guard vessels. But despite evidence of bouncing back from financial issues, Davie was shut out in 2011 when the two national shipbuilding strategies winners were named (Seaspan and Irving).

Davie is expected to soon successfully complete the formal selection process as the third partner for large ships under the National Strategic Strategy (NSS).

“Davie welcomes Canada’s decision to get a much-needed Polar icebreaker into service by 2030. We will build the Canadian Coast Guard’s flagship at the National Icebreaker Centre and lead efforts to deliver ahead of schedule,” commented James Davies, President and CEO of Davie Shipbuilding.

“While we await the exact details of how today’s announcement will translate into real work, we know the Polar can create thousands of jobs and have major long-term impacts on shipbuilding and the economies of Quebec and Canada.

“We also fully agree with Canada that time is now of the essence. We must start the project without delay to ensure the Polar offers immediate, material and sustainable stimulus to the pandemic recovery.”

“Chantier Davie is also very grateful for the solid and constant support we have received from the Government of Quebec. «

By splitting the work for the two Polar icebreakers, observers consider the federal government has avoided the political fall-out from having to decide between competitors in Quebec and British Columbia, but is discarding the possibility of reaping from the economy of scale if both ships were constructed at the same yard.

Both new Polar icebreakers will have capacity and ability beyond that of Canada’s current largest icebreaker, the CCGS Louis S. St-Laurent.  Early estimates are that the construction of these ships will generate approximately 300 jobs per vessel at the shipyards, and 2,500 jobs across the marine supply chain.

The construction of these new ships is in addition to the $17.49 billion in contracts already awarded to shipyards large and small across Canada under the NSS that have resulted in the revitalization of Canada’s shipbuilding industry, and the creation of thousands of jobs already.

Both shipyards are expected to be supported by many small and medium-sized Canadian businesses across the country, ensuring that the construction of these ships will be a historic, cross-country effort to help drive Canada’s economic recovery from COVID-19.

The procurement approach will ensure at least one polar icebreaker is delivered by 2030 when the CCGS Louis S. St-Laurent is expected to retire from service. Precise timing of icebreaker delivery will be determined once shipyard agreements are in place.

With their enhanced capabilities, these larger, more powerful Polar icebreakers will enable the Coast Guard to conduct year-round operations in Canada’s Arctic. Their greater endurance will ensure they can operate at higher latitudes for longer periods, and will allow the fleet to better support Indigenous Peoples and northerners, strengthen Arctic sovereignty, advance high Arctic science, and better respond to maritime emergencies.

“The new Polar icebreakers will be a game-changer for Canada’s marine industry–both in their construction and the difference that a stronger presence in the Arctic will make,” said Bernadette Jordan, Minister of Fisheries, Oceans and the Canadian Coast Guard.

“We are positioning Canada for the future by making investments today to build a more competitive economy,” said François-Philippe Champagne, Minister of Innovation, Science and Industry

“The know-how and expertise of shipyard workers in the Quebec City area is well established,”  said Pablo Rodriguez, Quebec Lieutenant and Leader of the Government in the House of Commons.