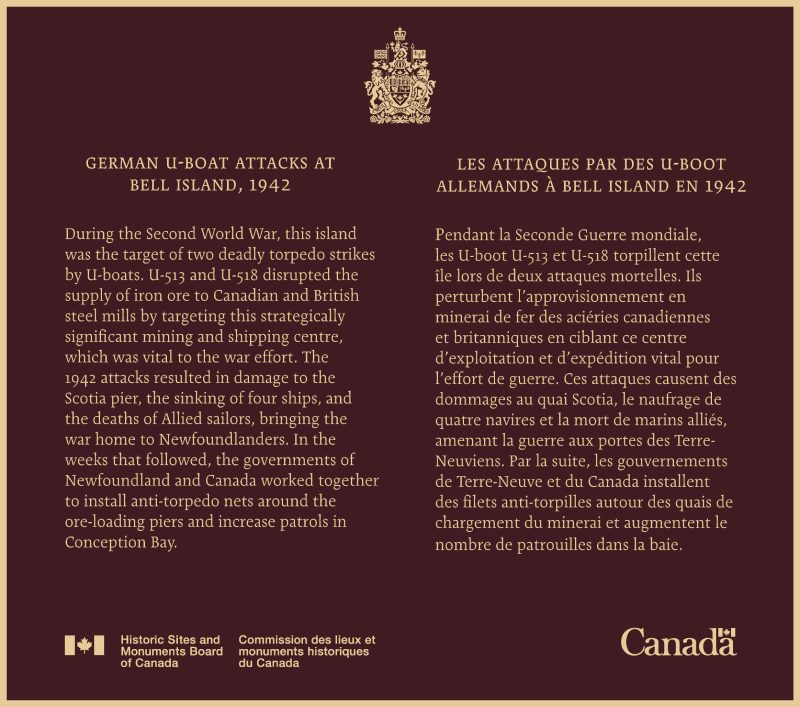 Yesterday, Joanne Thompson, Member of Parliament for St. John’s East, Newfoundland and Labrador, on behalf of the Honourable Steven Guilbeault, Minister of the Environment and Climate Change and Minister responsible for Parks Canada, participated in a Historic Sites and Monuments Board of Canada plaque unveiling ceremony recognizing the importance of the German U-Boat Attacks at Bell Island in 1942, as an event of national historic significance. The ceremony was held this morning at the Bell Island Community Museum, Wabana, Bell Island. The unveiling was almost 80 years to the day since the first U-boat submarine attack on September 5, 1942.

During the Second World War, Bell Island, located in Newfoundland’s Conception Bay, was strategically vital to Canada and Newfoundland’s war efforts. Iron ore produced in Bell Island’s mines supplied Cape Breton’s steel mills and was an integral part of the military-industrial war effort in Canada. Its location, however, made it vulnerable to attack from the sea, leading military authorities to install two 4.7-inch guns and searchlights in the nearby cliffs.

Following the outbreak of war in 1939, ore-carrying vessels from Bell Island quickly became a target for German U-boats attempting to choke off the supply of war material being shipped to the United Kingdom from North America. On September 5, 1942, the first attack by U-boat U-513 on vessels at anchor at Bell Island resulted in the sinking of SS Saganaga and SS Lord Strathcona. A second U-boat attack two months later on November 2 by U-518 resulted in the sinking of two more ore carriers – SS Rose Castle and PLM 27. Nearly 70 Allied sailors were killed in the attacks. The second attack also resulted in serious damage to Bell Island’s Scotia Pier loading dock. Some said that the sound of the explosions could be heard as far away as St. John’s, bringing the war home to Newfoundlanders. Both German U-boats escaped after the attacks.

The Government of Canada, through the Historic Sites and Monuments Board of Canada, recognizes significant places, persons, and events that have shaped our country as one way of helping Canadians connect with their past. By sharing these stories with Canadians, we hope to foster understanding and reflection on the diverse histories, cultures, legacies, and realities of Canada’s past and present.

The designation process under Parks Canada’s National Program of Historical Commemoration is largely driven by public nominations. To date, more than 2,200 designations have been made nationwide. To nominate a person, place or historic event in your community, please visit the Parks Canada website for more information: https://www.pc.gc.ca/en/culture/clmhc-hsmbc/ncp-pcn/application.

« The attacks that occurred at Bell Island during the Second World War will forever define the resolve and historical fabric of this community, and the Government of Canada is proud to recognize the national historical significance of this event. All Canadians should take the opportunity to learn more about this story and strengthen connections to our shared history, as well as honour those who paid the ultimate sacrifice for the freedoms we enjoy today. »Joanne Thompson, Member of Parliament for St. John’s East, Newfoundland and Labrador