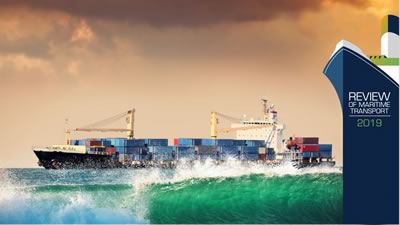 A United Nations agency has warned that a « new normal » has taken hold in world maritime trade, characterized by moderate growth, protectionist-impacted trade flows, and an accelerated sustainability agenda.

World maritime trade lost momentum in 2018 as heightened uncertainty, escalating tariff tensions between the US and China and mounting concerns over other trade policy and political crosscurrents, notably a no-deal Brexit, sent waves through global markets, according to the UN Conference on Trade and Development’s (UNCTAD) Review of Maritime Transport 2019.

Volumes in the sector grew by only 2.7% last year, below the historical averages of 3% and 4.1% recorded in 2017, according to the report. Nevertheless, total seaborne trade reached 11 billion tons.

« The dip in maritime trade growth is a result of several trends including a weakening multilateral trading system and growing protectionism, » said UNCTAD Secretary-General Mukhisa Kituyi. « It is a warning that national policies can have a negative impact on the maritime trade and development aspirations of all, » he added.

Buffeted by a global economic slowdown, in 2018, seaborne trade also navigated other difficult headwinds such as geopolitical tensions, while preparing for an expected surge in ship fuel costs arising from a new IMO regulation (as of January 2020) requiring ships to cut their sulphur dioxide emissions.

UNCTAD expects international maritime trade to expand at an average annual growth rate of 3.4% over the 2019-2024 period, driven in particular by growth in containerized, dry bulk and natural gas cargoes. However, uncertainty remains an overriding theme in the current maritime transport environment, with risks tilted to the downside.
Port traffic edges down

Reflecting slower maritime trade, growth in global port traffic also edged down, with container port traffic increasing by only 4.7% in 2018, from a 6.7% growth rate in 2017.
Similarly, container trade growth weakened. In 2018 volumes only increased by 2.6%, compared with 6% in 2017. This was matched with a sustained delivery of mega container ships, with container fleet supply capacity in 2018 increasing by 6% as compared to 4% in 2017. In an already overly supplied market, these developments further compressed freight rates in 2018.

The maritime transport industry saw a silver lining in the expanding liquefied natural gas sector. This has come as a result of intensified pressure to promote cleaner energy sources.
UNCTAD noted that supply chain disruptions were occurring and could deepen if trade conflicts, notably between China and the United States, were prolonged. « In addition to reducing trade flows, tariffs  are generating winners and losers, given product and supplier substitution and trade diversification efforts. »