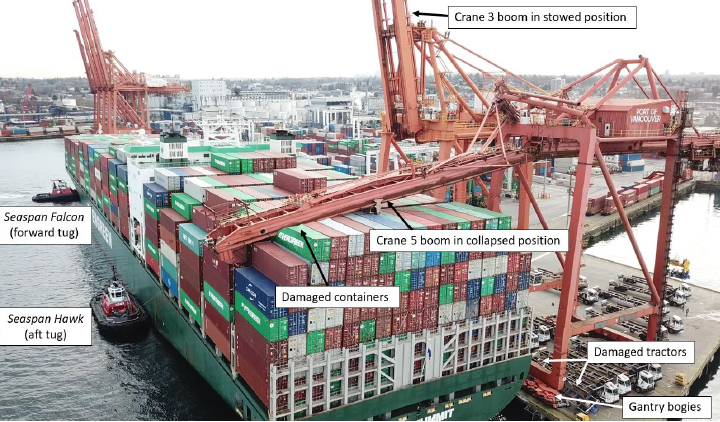 Richmond, BC — The Transportation Safety Board of Canada (TSB) released its investigation report into the container vessel Ever Summit  striking  the berth at Vanterm, in the Port of Vancouver. In the report, the Board expressed a concern relating to larger container vessels berthing at the Port of Vancouver and the capacity of existing terminal infrastructure to accommodate them safely.

On 28 January 2019, the container vessel Ever Summit was berthing under the conduct of a pilot at Vanterm in the Port of Vancouver, British Columbia, with two tugs assisting, one positioned aft, the other forward.  During the manoeuvre, the vessel struck the berth and an adjacent shore gantry crane. The vessel, berth, and crane were damaged. There were no injuries or pollution.

The investigation found that the pilot’s and bridge team’s view of the tugs were obscured, and that the pilot was relying on his memory and mental model of the manoeuvre to keep track of the location and movements of the tugs. Intending to move the bow of the vessel towards the berth by ordering the forward tug to push and the aft tug to pull, the tugs were inadvertently given opposite commands. As the tugs carried out the commands, the vessel’s stern rapidly moved towards the berth. Corrective action was ineffective, and the vessel’s stern struck the berth and crane, causing the crane’s boom to fall on the vessel.

At the time of the occurrence, the Ever Summit’s crew were relying on the pilot to manoeuvre the vessel safely to the berth, focusing primarily on monitoring the vessel’s position and carrying out the pilot’s orders and therefore not monitoring the pilot’s commands to the tugs. If bridge teams do not maintain effective bridge resource management, including monitoring communications between pilots and tug masters, there is a risk that errors will go undetected.

The investigation also found that procedures for tug use are largely left to the discretion of individual pilots, and that no standard communication protocols were in place at the time of the occurrence. If standardized communications are not used, errors in tug commands will continue to occur, increasing the risk of accidents.

Over the past 10 years, there has been a substantial increase in the size of container vessels worldwide, including those calling at the Port of Vancouver. Without upgrades to existing infrastructure, these larger vessels necessitate berthing manoeuvres that have very little tolerance for error. While all terminals are designed to accommodate a maximum vessel size and most have built-in safety margins, there are currently no requirements for Transport Canada or a port authority to examine the suitability of a berth for larger vessels. Decisions as to maximum vessel size are left to the discretion of the individual terminals, the TSB report noted.

Following the occurrence, the British Columbia Coast Pilots Ltd. developed standard operating procedures regarding tug communications during berthing and unberthing operations. The Port of Vancouver and the operator of Vanterm reviewed their crane storage practices for arriving and departing container vessels. (Photo from TSB Canada)