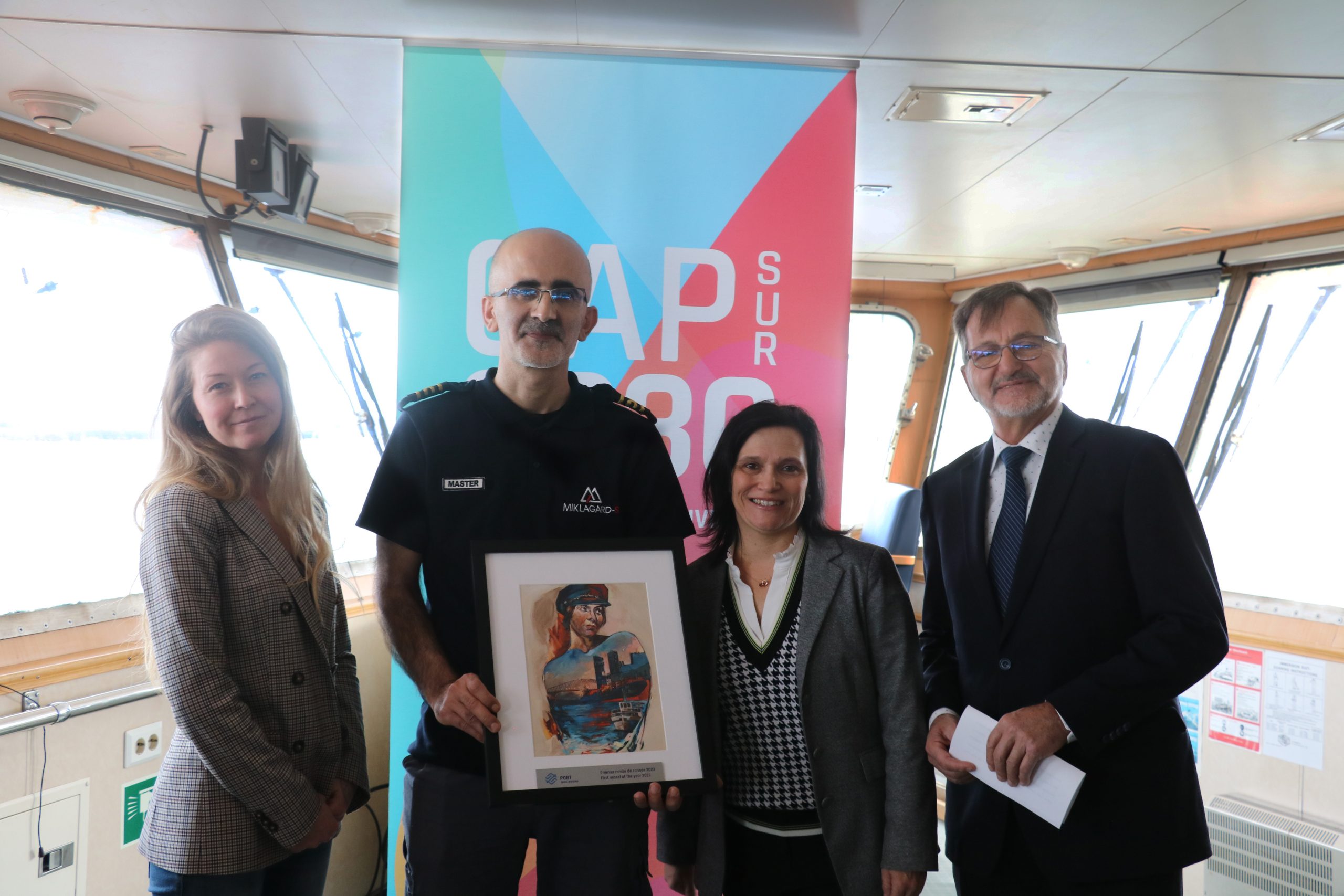 Trois-Rivières – The RF Stella is the first vessel to call the Port of Trois- Rivières in 2023. It docked at the Port on January 2 at 8 am, after an eight-day crossing of the Atlantic. The vessel, with its 20 crew members of Turkish nationality, left the port of West Palm Beach in Florida on December 25, 2022. Its cargo of molasses, unloaded by Servitank, is destined for animal feed production.

Ms. Véronique Néron, Vice-Chair of the Board of Directors of the Trois-Rivières Port Authority (TRPA), explained: “To receive the title, the vessel must arrive in Trois-Rivières from an overseas port without making a stopover at another Canadian port and perform a loading or unloading operation at the port.” To view the arrival of the RF Stella : 1st vessel 2023.

During the 57th ceremony marking the arrival of the first vessel of the year at the Port of Trois- Rivières, Captain Emin Koparan and Chief Engineer Canbeck Yeltin, received a basket of local products and a giclée reproduction created by Ms. Caroline St-Pierre, a painter from the Mauricie region, as part of the 140th anniversary of the Port.

Mr. Gaétan Boivin, President and CEO of the TRPA, reminded that Groupe Somavrac, owner of the Servitank subsidiary, has been operating at the Port of Trois-Rivières for 60 years. « The molasses delivered by the 1st vessel 2023 is stored in insulated tanks owned by the company and located at the Port before being redistributed by trucks or railcars and ultimately used in the manufacture of animal feed.

The  RF Stella was built in 2011 and is sailing under the Malta flag. It has an overall length of 161.68 m and a width of 23 m. The vessel is currently moored at section 11 of the port of Trois-Rivières for approximately three days. During its stay in Trois-Rivières, it will be represented by McLean Kennedy Agency.

Although the ceremony for the first vessel of the year was held for the first time in 1966, winter navigation to Trois-Rivières began with the arrival of the Maplebranch, on February 18, 1961. It was the first vessel to travel upstream from Québec in the winter. This newsworthy event made the front page of Le Nouvelliste, which called it an « amazing feat, » adding that the “Maplebranch was writing a page in the history of winter navigation.”  It should be recalled that few people actually believed that ships could navigate the St. Lawrence in the winter. It was considered to be impossible or too expensive. However, icebreakers and vessels adapted to this type of navigation, pilots’ implication and new technologies have made it a reality. Nowadays, a significant amount of traffic occurs in the winter. In Trois-Rivières, traffic remains constant year round. This does not mean that winter navigation should be trivialized. We must keep in mind the many actors in the river system whose efforts make winter navigation possible. Every year they repeat the Maplebranch’s feat. It should also be noted that the Canadian Coast Guard has set up a base in Trois-Rivières for the icebreakers that keep the channel open between Québec and Montréal during the winter.