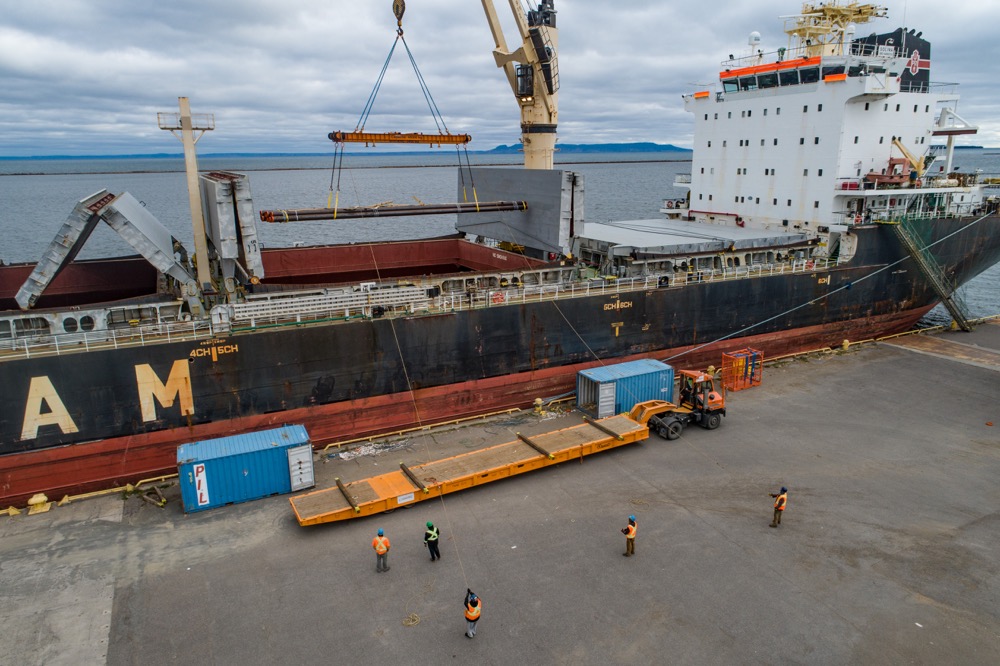 Great Lakes-Seaway Canadian ports and operators are expecting the final two months of the season to be busy following solid cargo volumes in October.

According to the latest figures, St. Lawrence Seaway cargo shipments between March 22 and October 31 totalled 28.5 million metric tons, up 1.9% from the same period last year.

General cargo (up 65%) led the way in October with steel imports expected to continue to hold strong through the balance of the year. Dry bulk shipments were up 8% due to cross-border trade of building materials. Iron ore shipments were up 20%, with Quebec mines supplying Canadian steel manufacturing, along with pellet exports from northern Minnesota ports headed to Quebec, which are then shipped to Europe.

Another return to normalcy can be seen in the liquid bulk category as more businesses return to the office and travellers take to the skies for leisure travel. Liquid bulk shipments (including jet fuel and petroleum) are slowly improving; down 5% through October.

“We anticipate a strong finish to the shipping season as Canadian domestic fleets are booked with a variety of cargoes and ocean vessels are coming into the system to deliver steel and export grain,” said Terence Bowles, President and CEO of The St. Lawrence Seaway Management Corporation. “This year proves the resiliency of shipping on the Great Lakes and St. Lawrence Seaway. With uninterrupted navigation, our transportation corridor helps the Canadian and U.S. economies regain their footing and North American businesses continue day-to-day operations despite the global supply chain crisis.”

Increased diversity in cargo shipments handled at the Port of Thunder Bay is helping to offset lower volumes of Prairie grain this season.

The Port’s general cargo facility, Keefer Terminal (pictured), is experiencing a 25-year high in cargo shipments. In October, nearly 8,000 metric tons of European steel pipe were discharged at Keefer, where the cargo is stored in expansive laydown areas and then trucked to Alberta. Also destined for Western Canada, Keefer will receive its third shipment of phosphate fertilizer in the coming weeks.

October was the strongest month this year for potash shipments in Thunder Bay, 67% above last year’s tally and 34% above the 5-year average. Most of the potash is directly exported via ocean-going vessels to Europe.

Similar to the Seaway, the Hamilton-Oshawa Port Authority reports strong increases in steel and construction materials through October. As of October 31, Hamilton Port’s year-to-date overall cargo total of 8.2 million metric tons is almost 20% higher than at the same point in 2020. Steelmaking commodities and construction-related materials continue to rise and fertilizer inputs have more than doubled, keeping Ontario farms humming through the remainder of the fall harvest and into the spring.

Year-to-date totals in Oshawa are slightly lower, compared to the port’s banner 2020 season. However, salt and liquid bulk cargoes were much higher in October compared to last October; as city crews stock up on materials for road maintenance this winter.

Harvest is in full swing at the Port of Johnstown with October seeing vessels arrive to load up on soybeans. The port recently completed the installation of three new state-of-the-art NEUERO grain ship loading spouts. This $12.5 million-dollar investment is a continuation of the Township of Edwardsburgh Cardinal’s efforts to automate their highly successful grain elevator and replace their aging equipment.

Robert Dalley, General Manager at the Port of Johnstown, said: “These gigantic pneumatic spouts are each capable of discharging grain at a rate of 900 metric tons per hour which will greatly improve our vessel throughput here at the port as well as significantly lower dust emissions.  We are currently in the commissioning stage and working hard to tweak the system in order to reach our targeted throughputs.  Our grain traffic is slightly ahead of last year and we are expecting an additional 5 to 6 vessels in November.”

October also saw the port receive vessels carrying salt in preparation for the upcoming winter season with another four or five vessels expected in November.

Port Windsor continues to see great demand for construction and manufacturing inputs.  Shipments of aggregates into the port are up 15%, totalling 1.3 million metric tons this year; while steel imports are up 120% over 2020.  Grain is lagging due to rains holding up the fall harvest but holding steady at just 3% below record 2020 exports. (Photo Thunder Bay Port Authority)