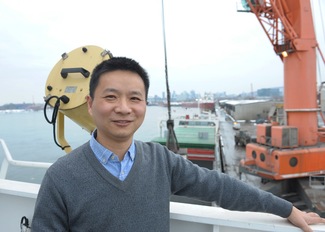 Canada’s second largest port passed a historic milestone of 40 million tonnes of cargo in 2019, it was announced on the occasion of the annual Gold-Headed Cane awarded to the captain of the first ocean-going vessel to reach Montreal without a stopover in the New Year. It was also another record performance for container traffic.

The Gold-Headed Cane, a port tradition since 1840, was awarded to Captain Qin Xiao Fei, a Chinese national, Master of the Exeborg which had left the Port of Sauda, Norway, on Dec 21 and crossed the Port of Montreal’s limits on January 3 at 2.11 a.m.

« In awarding this symbolic and historic cane to Captain Qin, we are expressing our gratitude and appreciation to the men and women who are at the heart of maritime economic activity all over the world, » said Sylvie Vachon, President and CEO of the Montreal Port Authority.

The Exeborg is a bulk carrier operated by Wagenborg Shipping and represented in Montreal by the Lower St-Lawrence Ocean Agencies Ltd. It docked early Friday morning at berth 42, at the terminal operated by Logistec.The Exeborg will stay there for a few days, the time it takes to unload its cargo: ferromanganese, used for the design and manufacture of high quality, ultra-resistant steel.

In the presence of many representatives of the marine industry and Montreal’s business community, as well as political figures, the MPA also recognized the work of the pilots of the Corporation of Mid St. Lawrence Pilots, Patrick Caron and Éric Godolphin, who safely guided the ship to port.

Among government representatives offering some brief comments was Chantal Rouleau, Québec Minister for Transport responsible for maritime strategy and development of a Projet Saint Laurent vision. In this connection, the Minister underlined the strategic importance for the federal government to maintain an effective Canadian Coast Guard fleet to protect a smooth flow of maritime trade on the St. Lawrence River.

At the ceremony, the MPA released preliminary (unaudited) statistics for 2019. During the review, it was announced that the Port of Montreal had another record year in 2019 in terms of the total volume of goods handled, the sixth year in a row. For the first time in its history, the Port of Montreal surpassed the 40 million tonne mark in cargo handled, reaching 40.5 million tonnes, up 4.1% over 2018.

A new record was also set on the container front, with a total of 1.75 million TEUs (twenty-foot equivalent units) handled and an increase of 4.4% over last year.

« In 2020, we are projecting that container traffic could increase another 3%, » Tony Boemi, the MPA’s VP Growth and Development, told Maritime Magazine.

Last year was also highlighted by solid results on the bulk front. The dry bulk sector had a 15.9% upswing in tonnage with a total of 9.3 million tonnes. Notably, grain increased by 109%. Liquid bulk remained stable at 16.2 million tonnes.

The cruise sector had more than 100,000 passengers and crew members.

The year 2019 was a decisive turning point for several major projects, all aimed at preparing the future for the growth of freight traffic at the Port of Montreal.
Among the turning points, the Contrec?ur Terminal project received financial support from Canada Infrastructure Bank with an investment of up to $300 million, confirming the project’s public interest vocation and national scope.
The MPA is also moving forward on planning and carrying out several other infrastructure projects, including:
The second phase of work at Viau Terminal, completing terminal construction and increasing container handling capacity by 250,000 TEUs;
The Grand Quay’s observation tower, adding a major architectural element to Montreal’s urban landscape;
Works to increase rail capacity, contributing to freight traffic fluidity;
Redevelopment of Bickerdike Terminal, making it possible to considerably improve this infrastructure that is the main base for supplies to Newfoundland and the Magdalen Islands.

A predictive version of the Trucking PORTal was also launched. This integration of artificial intelligence into port operations will help truck drivers plan their trips even better and improve the flow of traffic on Port territory, thereby reducing greenhouse gas (GHG) emissions. (photos Sylvain Giguère APM) 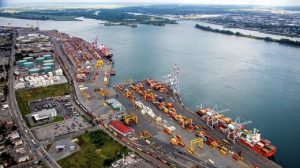