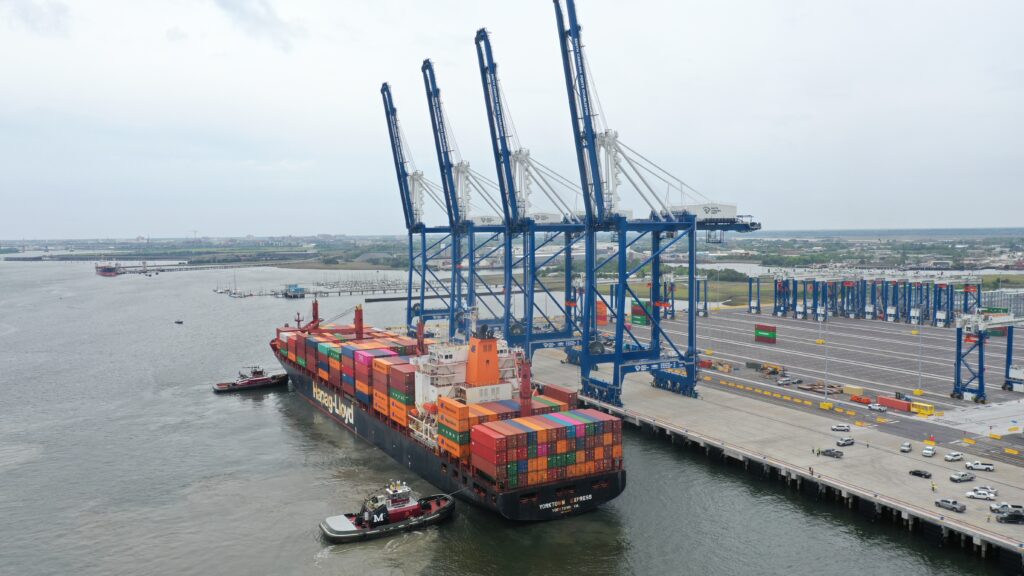 CHARLESTON, SC— South Carolina Ports made history on April 9 welcoming the first vessel to the Hugh K. Leatherman Terminal, marking the first container terminal to open in the U.S. since 2009.

Operations launched March 30 with the arrival of the first container, followed by the first ship arrival today with Hapag Lloyd’s Yorktown Express.

“The Hugh K. Leatherman Terminal is an investment in the future of South Carolina that will spur economic development, create jobs, and further our state’s position as an international business destination for years to come,” Governor Henry McMaster said. “This project is a momentous achievement which highlights the strengths of Team South Carolina. I congratulate the South Carolina Ports Authority and everyone who has worked towards achieving this historic day.”

The Leatherman Terminal, which has been 20 years in the making, is a generational milestone for SC Ports and for South Carolina. The terminal sits along the Cooper River in North Charleston, S.C., near Charleston Harbor. It can efficiently work the biggest ships calling on East Coast ports. Phase One adds 700,000 TEUs of throughput capacity to the Port of Charleston.

SC Ports CEO Jim Newsome said that the opening of the terminal comes at just the right time, as U.S. container ports continue to handle unprecedented cargo volumes amid strong consumer demand. SC Ports had an all-time cargo record in March, with a 50% year-over-year increase in loaded imports.

“SC Ports is extremely proud to open the first container terminal in the U.S. since 2009 in South Carolina. This took years of effort by our team and project partners,” Newsome said. “We have invested in the right infrastructure at the right time to handle growing cargo volumes and bigger ships, ensuring SC Ports remains a top 10 U.S. container port.

The Leatherman Terminal adds a berth and more capacity to the Port of Charleston when it is most needed on the East Coast. We made history today as we advance SC Ports’ capabilities and enhance South Carolina’s supply chain for generations to come. Tomorrow is here at SC Ports.”

The state-of-the-art Leatherman Terminal strengthens SC Ports’ big-ship capabilities and provides much-needed capacity to the East Coast. Its 1,400-foot berth can handle a 20,000-TEU vessel. Five electric ship-to-shore cranes with 169 feet of lift height and 228 feet of outreach stand on the berth, ready to move cargo on and off container ships. These cranes are among the tallest on the East Coast.