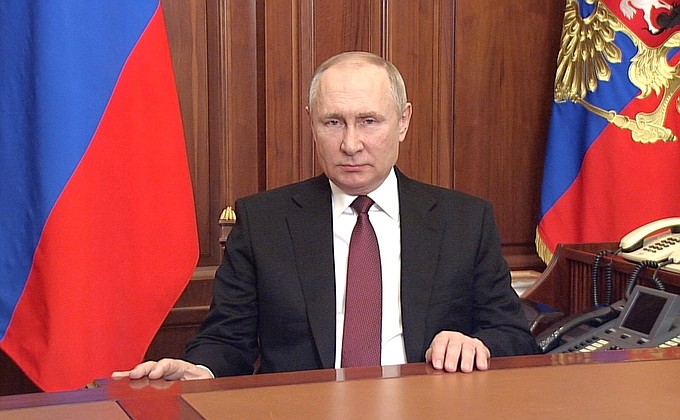 Russian president Vladimir Putin sent troops into four different regions of Ukraine this morning in an attack that is the largest seen on European soil since the end of World War II in 1945.

Sanctions raining in from the US and Europe, combined with crucial sea lanes becoming unstable, will rapidly change commodity flows in the coming days and weeks.

Among companies sanctioned is the firm leading the building of the Nord Stream 2 gas pipeline from Russia to Germany, while five ships belonging to Russian container line FESCO have also been slapped by sanctions from Washington. Further Russian merchant ship sanctions are expected to be revealed shortly.

Ukraine has asked Turkey to close the Bosphorus and Dardanelles straits to Russian warships while Russia has just suspended movement of commercial vessels in the Azov sea with a noticeable build up of ships at the southern end of the Kerch Strait.

In Odessa, a host of ships find themselves stranded, including three boxships, unable to leave the port. The port city has come under attack today.

“The energy markets, from natural gas to oil and coal, can only watch the unfolding as bystanders and attempt to make updated assessments on the repercussions of the conflict on supplies of the fossil fuels needed not only by Europe but also the rest of the world,” brokers Lorentzen & Co stated in an update today. Grain shipments are also braced for severe dislocation out of the Black Sea.

Eurostat data shows that Russia delivered 46.8% of natural gas imports to Europe during the first semester last year. Russia’s share of oil was 24.7%, ahead of Norway’s 9.1% and Kazakhstan’s 8.9%. The country is also the top supplier of coal to the continent. Russian and Ukrainian wheat exports combined, meanwhile, total about a quarter of the global trade. Any dislocation, whether as a result of sanctions or skirmishes, will inevitably push up the tonne-mile scenario for most shipping segments as Europe would need to source commodities from further afield.

Danish container analysts at Sea-Intelligence have pointed out that the escalating crisis carries a risk element for shipping services into the ports in Ukraine, but also has a risk element related to cyber-attacks against infrastructure – such as shipping and ports – in many NATO countries. (Photo of Vladimir Putin from kremlin.nu)