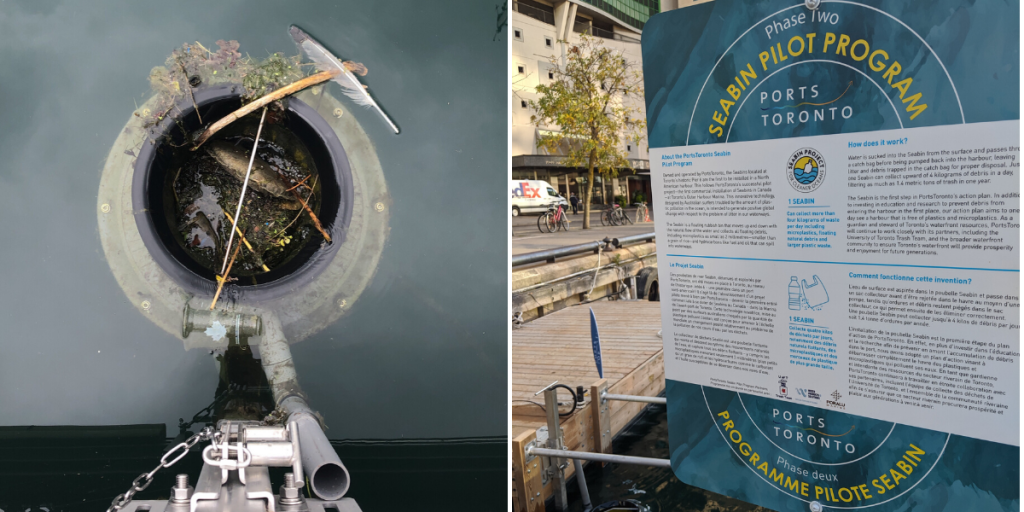 Toronto –With its second season now complete, the Seabin Program – managed by program partners PortsToronto and the University of Toronto Trash Team – has released 2020 results that confirm the important function the Seabins play both in capturing plastics and microplastics, as well as informing research on origination and approaches to elimination.

U of T Trash Team researchers report that over the 2020 season, between July and October, PortsToronto’s Seabins diverted an average of 85,000 small pieces of anthropogenic debris from Lake Ontario. Other than tiny trash, including microplastics (smaller than 5-millimetres), which are by far the most common items collected by the Seabins, other commonly found macroplastics include clear plastic packaging, hard plastic fragments from takeout containers or plastic packaging, and cigarette butts.

During the course of this research season, the U of T Trash Team also discovered that vegetation collected by the Seabins has an important role to play in accumulating microplastics. While the Seabins are effective in capturing floating litter and debris as small as 2-millimetres, plant material collected in the bins acted as a magnet to capture tiny microplastics, such as pre-production plastic pellets, that might otherwise pass through the Seabin’s capture bag. On average this season, PortsToronto’s Seabins diverted more than 11,000 plastic pellets from Toronto’s harbour.

As part of their wider research efforts and to help inform the future third phase of the PortsToronto Seabin Program, Trash Team researchers also undertook a visual audit of water lots on the Toronto waterfront, from Ireland Park to Sugar Beach, to help identify problem areas where floating litter typically accumulates. This season, researchers found over 100 different types of litter at the 12 visual audit locations. Of note, the majority of the floatable litter found were single-use plastics, including plastic straws, bottle caps and bags. This data supports the urgent need to reduce the use of harmful single-use plastic.

To view detailed data and results from the 2020 research season, click here.

“This year, we estimate that roughly 30 million tonnes of plastic debris entered aquatic ecosystems globally – including the Great Lakes. Trash traps, like Seabins, play a role in reducing plastic emissions to lakes and oceans. We are thrilled to be doing our part with PortsToronto to divert litter from our local waterways.” said Dr. Chelsea Rochman of the U of T Trash Team. (photo PortsToronto)