Port of Québec reports 2022 as a good year 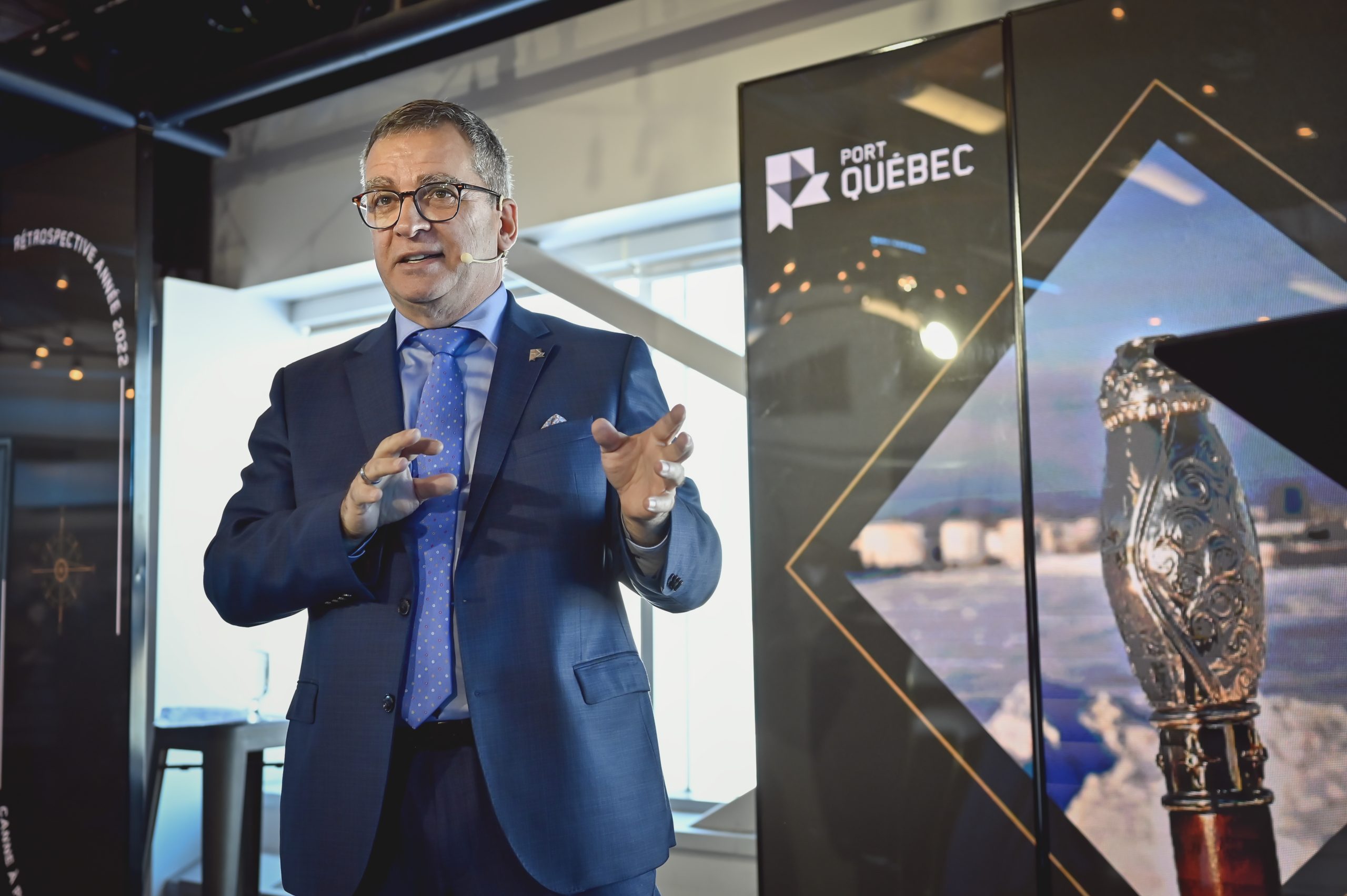 The Port of Québec has presented a retrospective of its 2022 activities at the traditional event marking the awarding of the Gold-Headed Cane and the beginning of the new year. Mario Girard, President and CEO of the Port of Québec, gave the past year’s highlights, including advances in sustainable development and community relations.

“The Port of Québec enjoyed a good year overall in 2022. The pandemic still had a negative impact at times, but the agrifood and other logistical supply chains present at the port such as steel, construction, and mining, held firm. Data on the quantity of goods handled is not yet fully compiled, but we expect results similar to 2021,” mentioned Mr. Girard.

The volume of goods handled at the Port of Québec in 2022 should reach 27.6 million tonnes, making it the third best year in the last ten years. For this last year, liquid bulk was on the rise with an increase in consumption by individuals and companies. Cement volume saw a record year while iron pellets and grain exports were down slightly due to poor harvests by western Canadian farmers for the latter.

The agrifood and other logistical supply chains present in the port territory such as steel, construction, and mining remained strong overall.

The port made significant progress in 2022 on environmental matters and played a key role in the fight against climate change. Notable achievements include:

 Rate incentive on port dues granted to over 200 cargo ships benefiting from the EcoCargo program due to their environmentally friendly practices;

 Signing of the United Nations Global Compact in addition to the signing of the AIVP – The Worldwide Network of Port Cities – 2030 Agenda;

 Implementation of a synchronized network of 8 air quality stations in the Limoilou sector, in collaboration with the City of Québec and the Environment Ministry;

 Revegetation of the swallow nesting grounds in Beauport Bay;

 Commitments announced for the smart and sustainable development of the cruise industry.

“An infrastructure such as the Port of Québec must conceive itself and act as a solution to environmental challenges and we have worked towards this goal. We used to think we had to respect the rules, which we did diligently. Now, the environmental issue is part of our daily reality, and we go above and beyond the regulatory requirements. It is integrated into our corporate culture and infuses our relations with the community with whom we are building new bridges,” added Mario Girard.

The past year was also highlighted by major progress in community relations. The Port of Québec could rely on a new team dedicated to a harmonious city-port cohabitation. Some initiatives include the development of the Je Participe community engagement platform, the launch of a newsletter on port activities, and the inauguration of the Tables de bon voisinage (neighbourhood round tables), discussion forums by geographic area where citizens can voice their concerns and work with us toward concrete solutions.

After a two-year hiatus due to the pandemic, 2022 was characterized by the resumption of activities with more than 92,000 visiting cruise passengers. In December, the Port of Québec and Destination Québec cité brought together community and industry stakeholders at the International Cruise Forum in Québec City to discuss sustainable development and responsible management of the destination. The proactive way to ensure the cruise activity integration in the community is present in Québec City and it is under this angle that the planning of the future development of cruises in Québec City is taking shape.

In addition to quality port operations, 2023 will focus on the environment and community relations, two core components of the Port of Québec’s 2035 Vision to be unveiled shortly.

“Our ambition is for people to be proud of their port. The role of port infrastructures is not well known, but it is central nonetheless considering that 80% of consumer goods arrive by ship. This transportation mode has by far the smallest carbon footprint. In 2023, we will continue to deploy concrete environmental action. We will present our new sustainable development action plan, and we will engage even more with citizens to interact with them and demonstrate the advantages of having a national scale port in Québec City,”concluded Mario Girard.